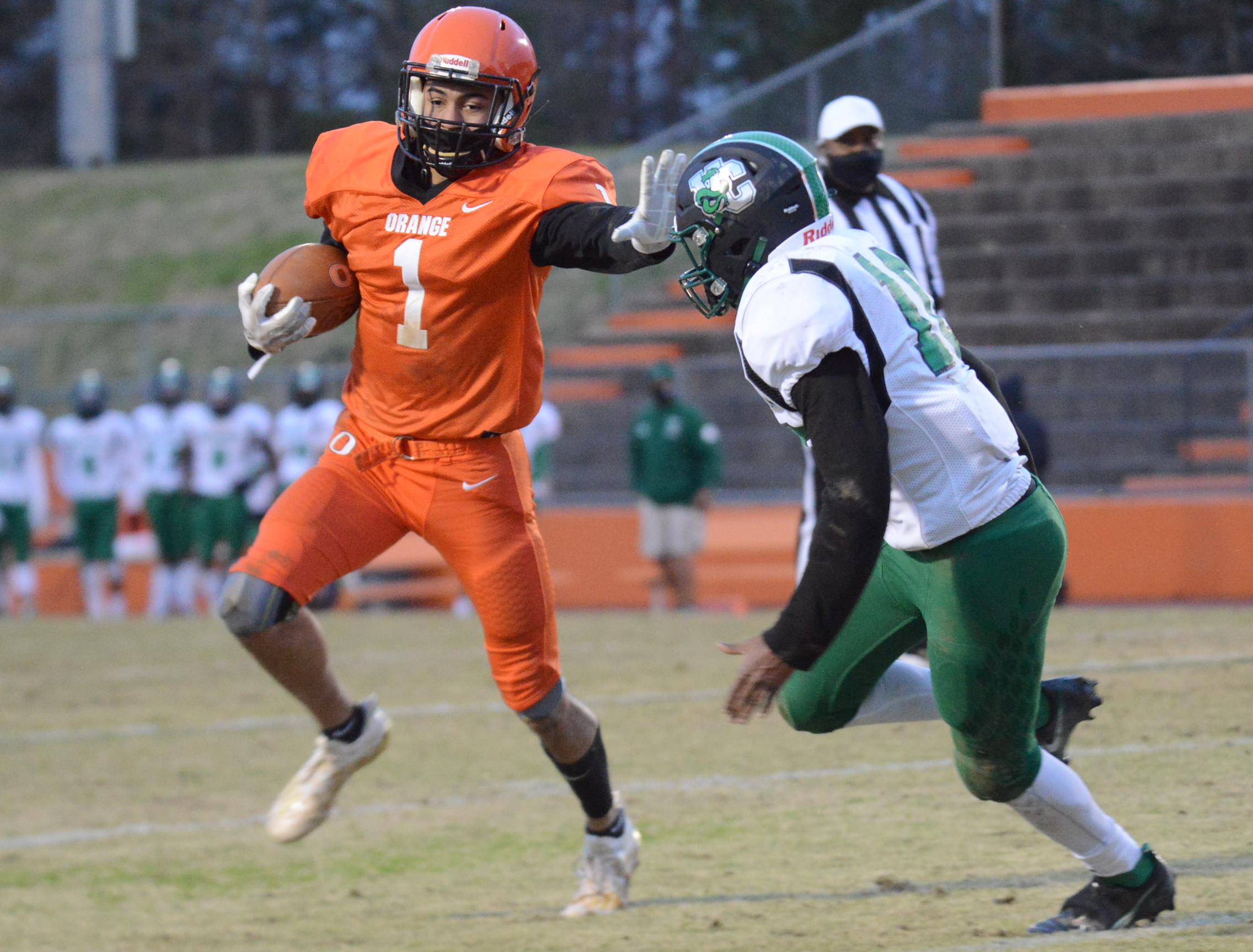 In its most basic form, the double wing offense is built on power and deception.

If it’s operated the way it’s supposed to, the double wing can wear opposing defenses down, generate long drives that takes lots of time off the clock, keep an potentially explosive quarterback off the field and puts the ball in the hands of many skill players, if they’re available.

In other words, basically what Orange did on Saturday night.

After an early hiccup, Orange scored 22 unanswered points to defeat Vance County 22-8 at Auman Stadium. Senior Eric Brooks, who had never scored in his varsity career, finished with three touchdowns.

No less than ten players registered carries for Orange as they piled up a season-high 238 rushing yards in its second game with a new look offense engineered by senior quarterback Jayce Hodges, who replaced the now-departed Nigel Slanker against Northern Durham on March 12.

“(Offensive coordinator) Coach (Marty) Scotten told the guys after the game that the style we’re running can run down the opposing team,” said Orange Coach Van Smith. “You can tell they got worn down. They were taking knees in between plays.”

After being held to a dismal 50 yards total offense and three first downs in the season opener against Southern Durham, Orange’s new double wing alignment has shown week-to-week improvement. Against Northern Durham, the Panthers had 151 yards, ten first downs, but finished 3-of-11 on 3rd down conversions. Against Vance County, they had 250 yards total offense, a season-high 16 first downs and was 8-of-15 on 3rd down conversions.

Orange shifted the pace of the game midway through the second quarter, when Vance County held an 8-7 lead. With 8:23 remaining in the first half, Orange started a drive at its own 11-yard line. From that point forward the Panthers ran 30 of the next 36 plays from scrimmage.

Orange opened the second half with a 10-play, 66-yard drive that took 4:59 off the clock, but it easily could have fizzled earlier. On 3rd-and-10, J.J. Torres took the ball from Elliott Woods on a double handoff and pushed forward for a 12-yard gain to move the sticks. And the shape of the game changed.

Orange began finding more running room as the Vance County defensive front logged more minutes. Brooks dashed around right end for a 13-yard gain to barge into the red zone, then scored his second touchdown over right guard. He also added the two-point conversion to push Orange ahead 14-8.

On the next Vance County play, Hodges intercepted a pass that was tipped by Elijah Dansler. Hodges returned the interception 34 yards. On third-and-goal, Brooks cashed in for the third touchdown.

For the second week in a row, Orange’s opponent got a touchdown on its opening drive and didn’t score again. Vance County Carl Stephens broke two Orange tackles and won a footrace to the end zone for a 70-yard touchdown run. Quarterback Israel Terry’s pass on the two-point conversion was tipped by Connor Ray, but caught by Kevon Burton only 30 seconds into the game.

Stephens had 80 yards rushing after the first drive, but finished with 86.

After scuffling on its first two drives, Brooks’ first touchdown came with :13 seconds remaining in the 1st quarter. After Jackson Wood converted a 4th-and-1 from the Vipers 35-yard line, Brooks carried the ball on a end sweep and followed the blocks of Jaylen Partin and Brendon Worsham to turn the corner into the end zone.

Late in the third quarter, Vance County had a classic Griswald Drive, going 12 plays and 63 yards only to find that Wally World was closed. Terry converted two 3rd downs, including a scramble for 15 yards to the Orange 29-yard line. Terry hit Stephens for a 7-yard gain to put the ball in the red zone, but the drive ended after an incompletion on fourth down courtesy of a pressure by Orange defensive lineman Will Torain.

Vance County’s last two drives ended with interceptions by Panther junior safety Elijah Danley, including one on the final play of the game.

Orange will start the second half of the season against Northwood in Pittsboro on Friday. Last year, the Chargers had a 24-6 lead against the Panthers, only to lose in overtime.

With Southern Durham in the driver’s seat for a second consecutive conference crown, next week’s game could decide who received the second playoff birth from the Big 8.

“It’s exciting to see those guys develop and grow confidence in the offensive line,” said Orange Coach Van Smith. “They’re getting confidence in their quarterback and themselves. It’s fun to watch.”