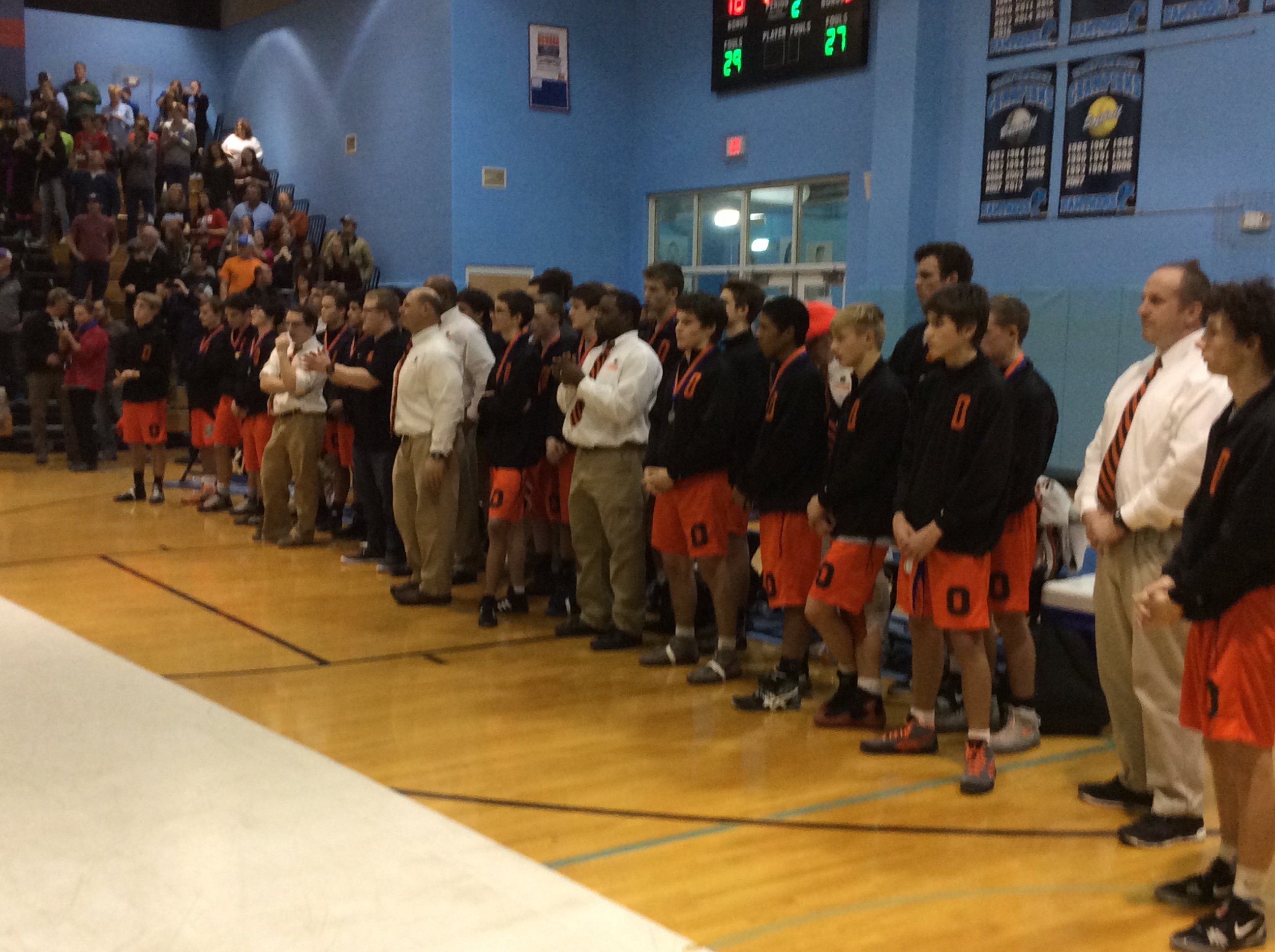 After coming one takedown short of its sixth state championship last weekend in Monroe, the Orange Wresting team is off to a strong start at the 3-A Mideast Regionals.

On day one of the regionals at Morehead High School in Eden, eleven Orange grapplers qualified for next weekend’s state championships at the Greensboro Coliseum.

In addition, three Cedar Ridge wrestlers all also headed to the state finals.

Cedar Ridge’s Demarcus Smith also punched his ticket to Greensboro after pinning Giovon Poirer of Lee County in 3:24. Smith will face Orange’s Braden Homsey on Saturday morning. Homsey outscored Chris Kelly of Union Pines 12-10 in Friday’s 2nd round. In the first round, he pinned Eastern Guilford’s Dylan Dains in :45.

At 160, Cedar Ridge’s Colin Davis is still in contention for a regional championship. Davis started the day with a pin of Northern Vance’s Josh Florentino in 3:07. He advanced to the semifnals with a 9-5 decision over Chapel Hill’s William Hess.

At 113, Darius McLeod pinned Chapel Hill’s Zin Maung in 4:24. He faces Rockingham County’s Noah Wilson on Saturday. McLeod improved to 20-12 on the season.

Orange’s Payton Wilson, ranked #1 in the state at 220, improved to 37-0 by pinning Dan Freeman of Northern Guilford in :52 He faces Big 8 rival Joseph Cannon of Chapel Hill in Saturday’s semifinal.

Coming off a thrilling 3-2 victory last Saturday over Piedmont’s Mathis Strickland, Josiah Ramirez scored two pins on Friday. For the second time in eight days, he pinned Gray Creek’s Leo Walsh, this time in :27. In th second round, he pinned Eastern Guilford’s Justin Spruill in 4:56. Ramirez takes on Morehead’s Kyler Whicker (36-6) on Saturday morning. Ramirez is now 47-4 with 28 pins, tied with Charlie Fitzpatrick for the team lead.

Speaking of Fitzpatrick, he’s in the semifinals at 152 after pinning Jordan Isenour of Morehead in 4:21.

Sophomore Levi Anderson is going to his first state tournament at 138 pounds. He opened Friday by pinning Sabeon Campbell of Douglas Byrd in 2:22. Anderson advanced to the semifinals with a 18-9 major decision against Eastern Alamance’s Andrew Dawson.

The fastest pin of the day by a Panther belonged to Avery Jenkins at 145, who finished off Cedar Ridge’s Ruffin Wyrick in :17. Jenkins, a sophomore, moved on to the semifinals with a 10-1 major decision over senior Carson Amy of Northwood.

After a stunning victory last weekend in the state dual championship match, Jamar Davis continued a strong sophomore season with two pins on Friday. He defeated McMichael’s Khalil Ngom in 2:40, then pinned Western Alamance’s Trevon Hart in 3:37. Davis improved to 42-8 with 26 pins.

If Orange holds on to the overall team lead, it will be its fifth victory in a individual tournament this season. They already have captured championships in the Jim King Invitational, Southwest Guilford Invitational, Eastern Alamance Invitational and Roselle Park Tournament in New Jersey.