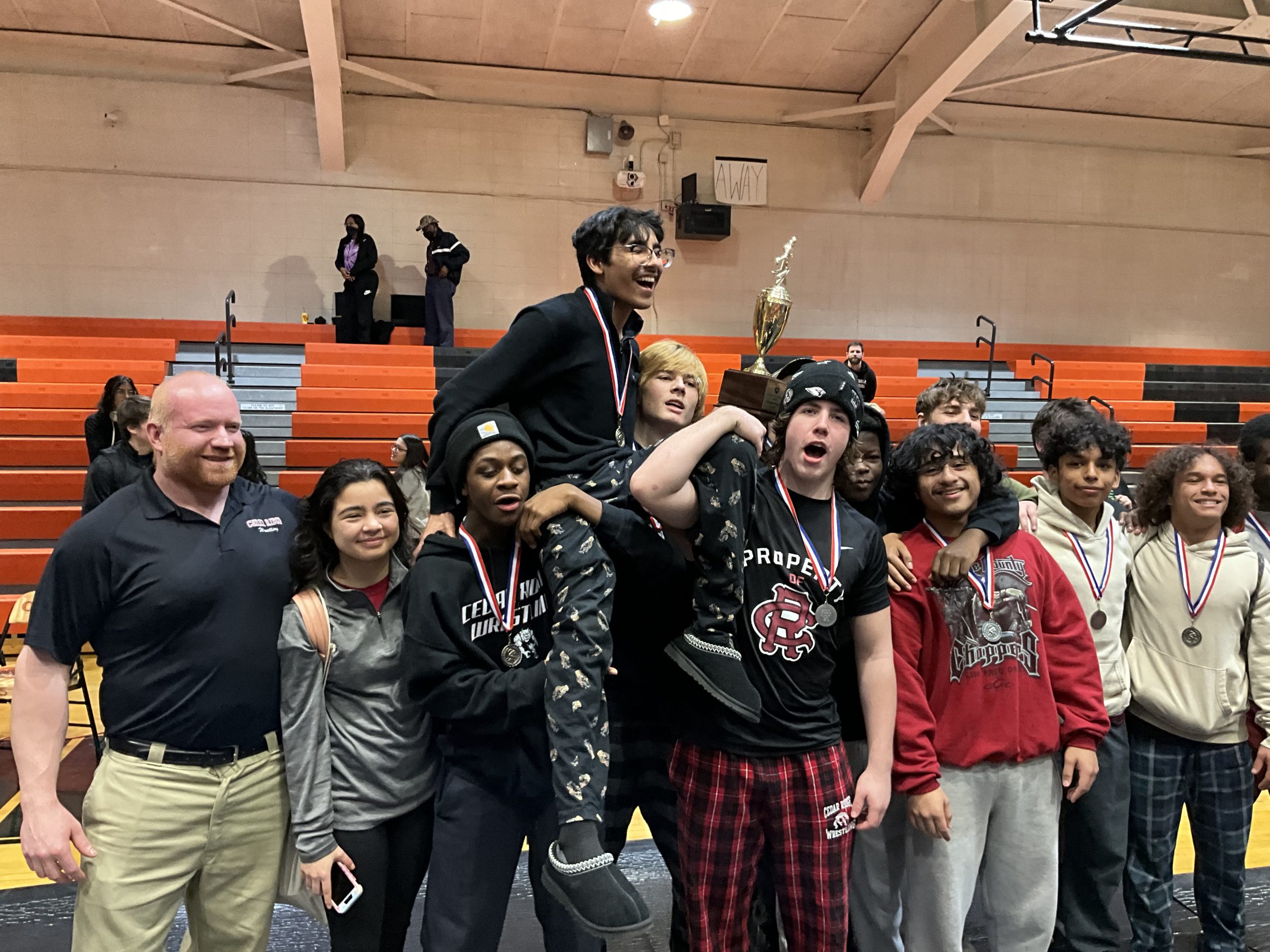 A day of redemption and rematches led to the greatest success as a 3A team for the Cedar Ridge wrestling team.

Inside the home of its crosstown rival that’s won title after title for decades, the Red Wolves captured its own championship on Saturday. Behind individual titles from senior Fernando Martinez, junior Kaden Tatro and sophomore Pierce Prescod, Cedar Ridge won the Central Carolina Conference Tournament championship at Orange High School. The Red Wolves finished with 185.5 points. Person came in second with 177 points

Orange, the regular season champions of the CCC, was hampered by the absence of six starters, including Acoya Isley, Dillon Heffernan and Hugo Vazquez. The Panthers finished fourth with 138 points.

Cedar Ridge coach Scott Metcalf, a graduate of Orange High School, led the Red Wolves to its second tournament championship in as many weeks. The previous Saturday, Cedar Ridge won the Silver Fox Invitational at Riverside High in Durham.

“It’s pretty awesome,” Metcalf said after the Red Wolves were awarded the team trophy. “We lost to Orange and Person in the regular season so coming back and winning here in the end means a lot. It’s special for our guys to finish strong like this.”

It was an extra special day for Martinez, who won the 113-pound championship. Martinez defeated the top-seed, Person’s Christian Lemaire, 13-2 in the title match. It was the third match this season between Martinez and Lemaire. In the Red Wolf Invitational on November 19 at Cedar Ridge, Lemaire defeated Martinez 7-5 in the championship match at 120 pounds. Three days later in a dual match between Person and Cedar Ridge, Lemaire defeated Martinez 9-0.

It was a blow to Martinez’s confidence after he won the 113-pound Mideast Regional championship last February.

“Honestly, I was expecting to get beat down a bit,” Martinez said. “I didn’t have much faith in myself in the beginning.”

Before his championship rematch against Lemaire, Martinez talked with an old coach who was in the stands that filled him with confidence.

“I knew I could perform way better than what I did originally,” Martinez said. “So I just blew it out of the water today. He told me I knew about my own abilities. I should embrace that. I am good, it just took me forever to acknowledge the fact that I am good.”

Martinez scored a takedown off a fireman’s carry just 31 seconds into the match. Lemaire could only muster an escape point in the opening period. Martinez avoided a single-leg takedown and put all his weight forward to start the second period to earn back points off a near fall and went ahead 4-1. He notched another takedown to take a 6-1 lead.

Tatro rolled to his third individual championship this season at 182 pounds. Facing Ethan Kuball of Northwood in the championship, Tatro won 8-3 to improve to 49-4 on the year. In the semifinals, Tatro pinned Jordan McDowell of Walter Williams in 2:14.

In the championship match, Tatro immediately notched a takedown, then grabbed Kuball’s left leg and got two points for a near fall. In the second period, Tatro started from the bottom and immediately gained a sweep with 1:22 remaining. Tatro led 6-0 going into the third period.

Cedar Ridge’s Pierce Prescod claimed his second individual title after winning the 120-pound championship. Taking on Person’s Taveon Moss, Prescod got a trip takedown 39 seconds into the match. Prescod got Moss onto his back and wrapped up the pin at 1:07 for his 42nd win of the season.

On a day filled with rematches, Orange’s Elijah Acosta continue his rivalry with Northwood’s Jake Dunning in the 220-pound championship match. Facing each other for the sixth time in the last two years, Acosta avenged a loss from January 4th with a 3-0 victory. Acosta, who is 24-5 on the season, scored the opening point on a escape 45 seconds into the second period. Late in the frame. Acosta shot in and bullied Dunning down for a late takedown to increase his lead to 3-0.

On January 4, Dunning defeated Acosta 5-1 in a dual match, also at Orange Gymnasium.

At 152 pounds, Orange’s Sam Crawford defeated Western Alamance’s Mason Hogsed 7-5 in what may have been the most dramatic championship final of the day. Crawford charged out to a 5-1 lead after he gained Hogsed’s back for the opening takedown with 1:05 remaining in the first period. Crawford escaped from the bottom to go ahead 3-0 in the second period. Hogsed got an immediate sweep from the bottom to reduce the deficit to 5-3. Crawford escaped, but Hogsed got a single-leg takedown. After Crawford scurried free to go up 7-5, Hogsed charged and nearly had a takedown as the match ended. Hogsed appealed to the referee for a takedown after the final buzzer sounded, but no points were awarded and Crawford got his hand raised to improve to 31-9.

Orange junior Jared Hutchins won the 132 pound championship. Hutchins pinned Coltrane Northington of Northwood in 1:12. It took Hutchins only five seconds to get the opening takedown. Northington nearly got a headlock for a reversal, but Hutchins used his strength to get Northington on his back and score the pin at 1:11.

At 126 pounds, Orange sophomore Braden Crawford defeated Walter Williams Zy’Aire Priester for the title. Crawford led 5-2 at the end of the first period. Priester was a penalized a point after he grabbed Crawford’s trunks. Priester gained Crawford’s back and got both of his legs in midway through the period, but Crawford scored a sweep and earned the pin at 2:55.

Cedar Ridge had four other grapplers finish in second place. At 145 pounds, sophomore Ryan Rakouskas pinned Orange’s Aiden Cain in 42 seconds to reach the final. Northwood’s Ronald Walker claimed the championship with a pin at 2:18 of the championship match.