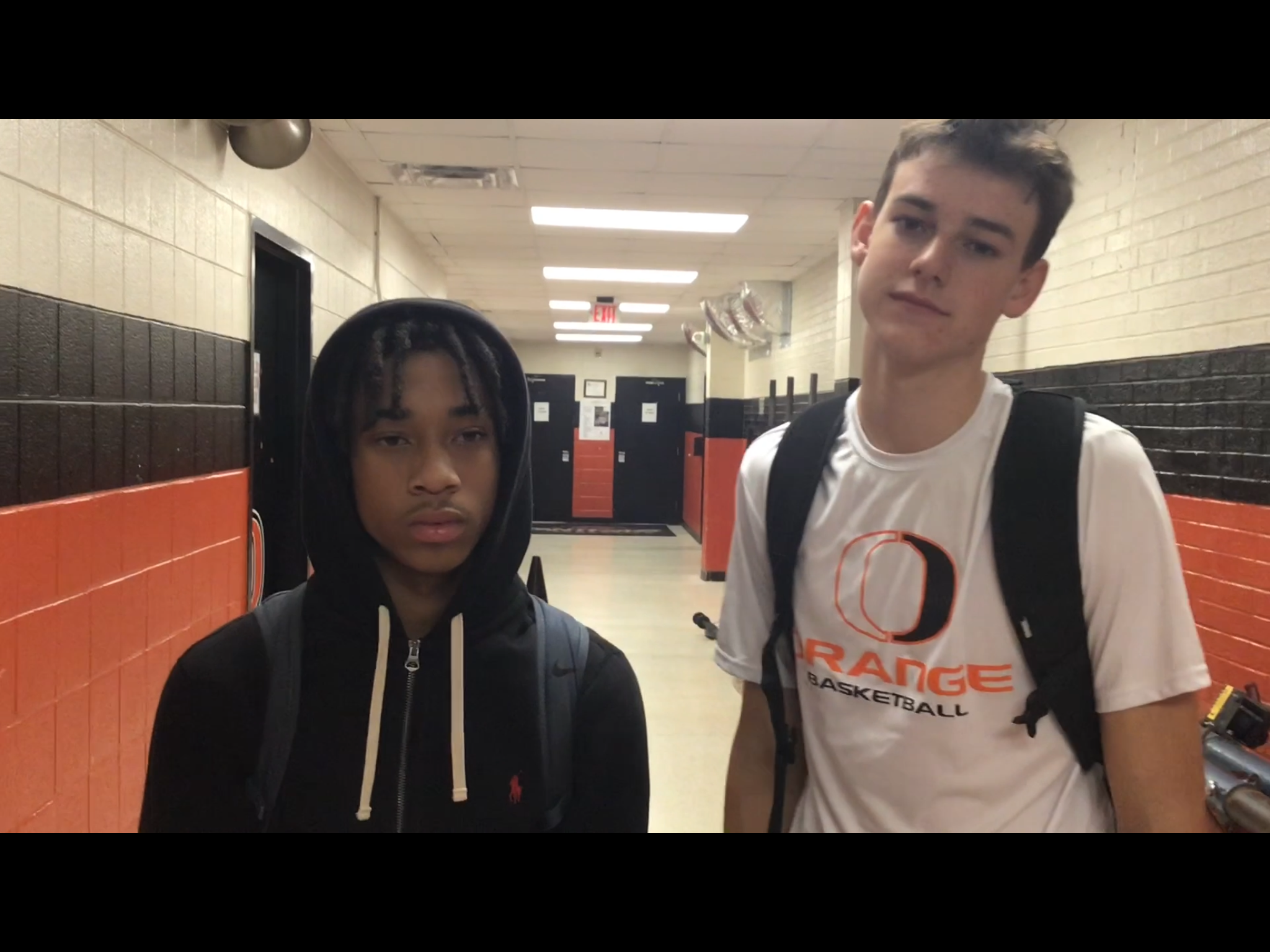 FRANKLINTON–The fact that Coleman Cloer had been sick and hadn’t practiced since Thanksgiving didn’t matter in the end against Franklinton on Tuesday night.

Neither did the fact that he was a freshman. Or that a Franklinton player bumped him as he stood at the free throw line before he shot the free throws with Orange’s game against the Rams on the line with 7.2 second remaining with the Panthers trailing 66-65.

All of that was irrelevant because Cloer knew he was going to make those shots long before everyone else did.

He had just told his teammates that.

“Cole, take your time with these free throws. We need ’em,” one of Cloer’s teammates said as they huddled during a timeout.

True to his word, Cloer calmly sank both free throws for the final points of a long night inside Red Rams Gymnasium to put the Panthers ahead 67-66.

It was the third lead change of the final minute. Then the Panthers and everyone else in the loud gymnasium watched as Mikel Alston, who had burned Orange all night, missed a stickleback 15-footer as the buzzer sounded after Camden Taylor’s outside shot fell short, preserving a 67-66 Panthers win.

Cloer finished with 22 points. Sophomore Xandrell Pinnix had 18 as the Panthers (2-1) claimed its first road victory of the season.

The Rams led the Panthers 63-60 with 1:12 left in the fourth quarter. Pinnix evened the game with a 3-pointer when Cloer found him out on the wing for a 3-pointer. Pinnix scored 16 of his 18 points in the second half.

With 1:03 remaining, Alston split a pair of free throws after he was fouled by Pinnix. On Orange’s next possession, Cloer missed on a drive to the basket and the ball went out of bounds of Malachi Poole. Franklinton’s Da’Kari Jones sprinted back on offense and fired a jump pass that was intercepted by Kai Wade. Cloer’s drop step in the lane fell short, but he rebounded his own miss for a tip-in that vaulted the Panthers ahead 65-64 with :22.6 remaining.

On the subsequent inbound, Alston bolted up the floor like a wide receiver and took a pass from Camden Taylor and scored on a transition lay-in to give the Rams the lead. Cloer brought the ball up the floor and was knocked to the floor by Travon Sharps, who picked up his fourth foul.

“I called timeout before the free throws because I knew he was tired,” Orange Coach Derryl Britt said. “He told everyone he was going to make those free throws. I thought ‘That’s my guy.'”

In a game that had twists and turns at warp speed, Orange led 51-44 with 6:28 to go in the fourth quarter. The Rams had two four-point trips in the final five minutes to take the lead. After Parrish Rushing split a pair from the foul line, Alston drained the first of his four 3-pointers in the fourth quarter.

With 3:52 remaining, Pinnix put Orange ahead 56-52 following a three-pointer. Sharps got a free throw following a foul on Orange’s Ryan Honeycutt. After Sharps missed the second, Jones swished a 3-pointer to tie the game.

It’s the start of a stretch of four games over five days. The Panthers will face the North Carolina School of Science and Math on Thursday, travel to Riverside on Friday, then face Wake Forest on Saturday.

Asia Burton scored 19 points for Franklinton in the women’s game to lead the Red Rams past Orange 56-44. Mikayla Taborn, a 6-foot-2 junior, finished with 13 points as the Red Rams earned its first win of the season.

Orange was led by Jada Reed, who finished with 17 points. Erin Jordan-Cornell had 12 points for the Lady Panthers (1-2). Orange will try to rebound when they face the North Carolina School of Science and Math in Hillsborough on Thursday afternoon at 5 PM.