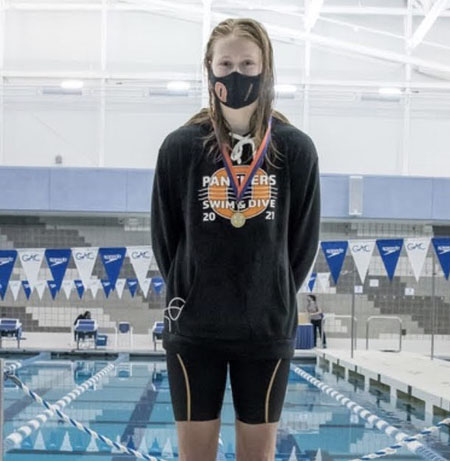 In a year that was anything but ordinary, Orange’s Katie Belle Sikes came away with a silver medal in the 50 yard freestyle at the 3A State Championships last winter.

That silver, paired with the 3A Central Regional championship she claimed in the midst of the pandemic, was a lot for a freshman in 2021. Yet through the summer and into her sophomore year, Sikes has had returning to the state championships and walking away with a goal foremost in her mind.

On Thursday night, Sikes prepared for the upcoming run to the regionals by claiming two 1st place finishes at the Central Carolina Conference Swimming championships at the Orange County SportsPlex. Sikes claimed the gold medal in the 50 yard freestyle, where she edged Northwood seniorJulia Earnshaw by nine-hundredths-of-a-second. Sikes claimed the 100 yard freestyle at a much more comfortable time of 53.97 seconds, with Earnshaw finishing second at 55.64 seconds.

Last year because of the pandemic, Sikes competed mainly in empty pools racing only against the clock. This year, with loosened restrictions, Sikes has found herself in a more typical setting with competitors surrounding her in adjacent lanes.

“Last year was an easy start into high school swimming. It wasn’t overwhelming,” Sikes said. “This year has been so much fun to get to swim against everyone else and all of these different teams. We got to grow as a team in general.”

Earlier this month, Aitkin, Stinnett, McCrimmon and Pearce set the school record in the 200 yard freestyle relay at 1:55.00 in their final dual meet. On Thursday night, the team broke the school record again at 1:54.15. They finished second in a close race to the wall behind the Northwood team of Gwen Hoeg, Anna Beck, Bianca Perez and Holly Thesing, who had a time of 1:53.38.

Stinnett was one of several Cedar Ridge freshman to come away with gold medals in their first conference championship meet. Stinnett, who qualified for regionals in November in her first dual meet, won the championship of the 200 yard freestyle at 2:05.28, a new personal best. It was a full 14 seconds under the automatic qualifying time of 2:19.49.

Cedar Ridge finished third in the women’s standings with 308 points. Orange came in fourth at 245 points. Northwood claimed the conference championship with 563 points, while Eastern Alamance finished 2nd at 363 points.

Northwood’s Corrado earned four gold medals on the night. She won the 100 yard backstroke and the 500 yard freestyle. She also finished first in two relay races: the 200 yard medley relay and the 400 yard freestyle relay.

Orange senior Sandra McCouch, who is in her first year in Hillsborough after moving from Philadelphia last summer, finished 3rd in the 200 yard individual medley at 2:30.56. McCouch also finished third in the 100 yard breaststroke with a time of 1:17.95. Two weeks ago, McCouch qualified for regionals in the breaststroke.

Quinn McCrimmon of Cedar Ridge finished 3rd in the 100 yard butterfly at 1:06.70. She automatically qualified for regionals, which will be held at the Greensboro Coliseum Aquatic Complex on February 5.