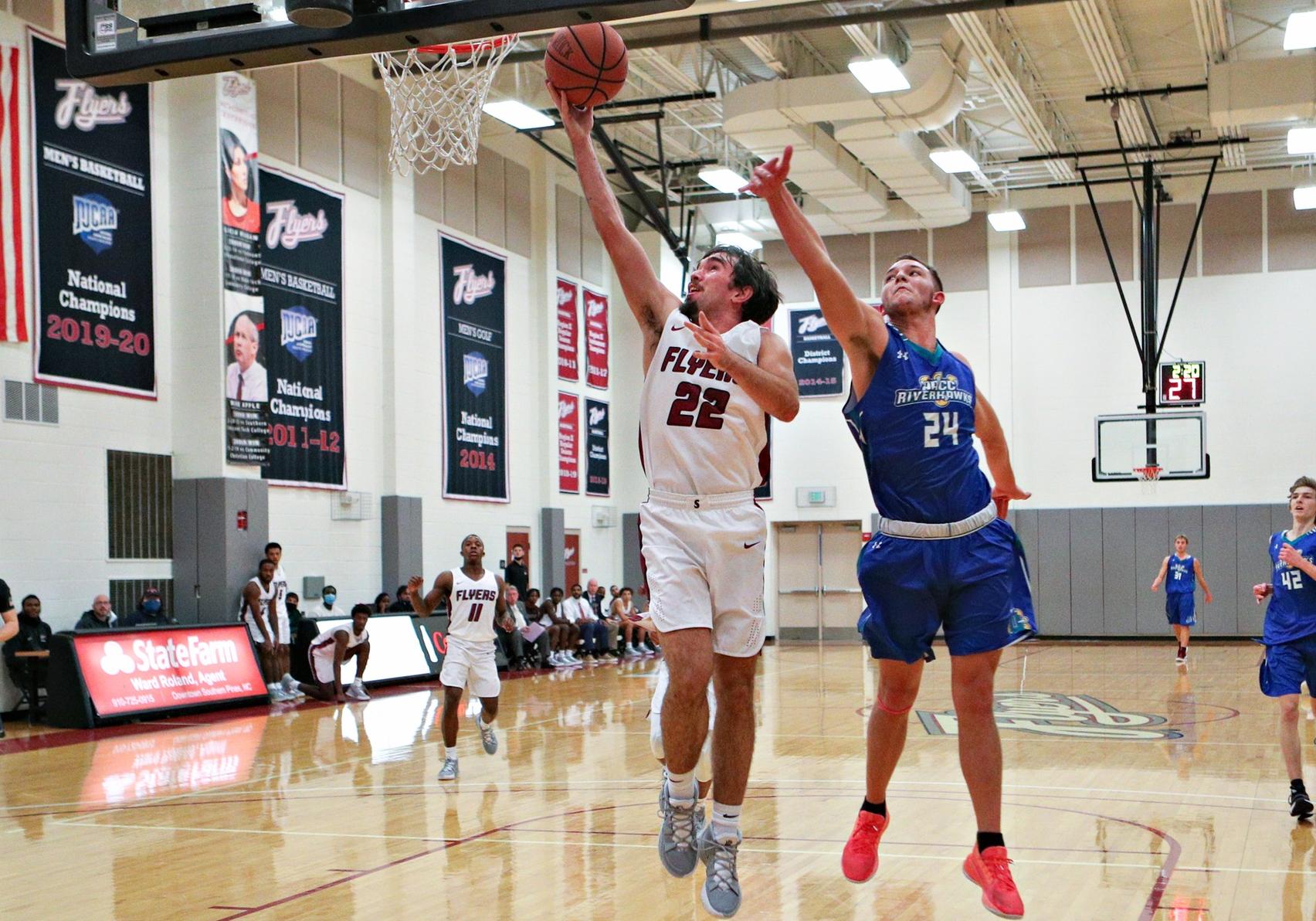 Joey McMullin: The Sandhills Community College men’s basketball team has won four in a row. On Saturday, the Flyers defeated Oxford College of Emory University 93-78 in Oxford, GA. McMullin scored 19 points, including 12 in the first half, as the Flyers improved to 4-0 in Region X of the National Junior College Athletic Association. McMullin shot 8-of-11 from the field, including 3-of-4 from 3-point range, as the Flyers pushed out to a 41-29 halftime lead. McMullin and Darryl McCaster each had 19 points to lead the Flyers. McMullin added three rebounds and an assist. On January 12, the Flyers defeated Central Carolina Community College in Pinehurst. McMullin had four points, one rebound, one assist and one block. Last weekend, the Flyers swept a two-game weekend series against Dabney S. Lancaster Community College in Clifton Forge, VA. On Friday, the Flyers defeated the Roadrunners 107-62. McMullin scored 13 points on 6-of-12 shooting from the field in 15 minutes. He also grabbed one rebound. The following day, Sandhills defeated Lancaster 100-55. McMullin led all Flyers with 20 points on 9-of-11 shooting from the field. He played 18 minutes. McMullin also led the team with nine rebounds. On January 4, USC Salkehatchie defeated Sandhills 104-91 in Walterboro, SC. McMullin scored 14 points in 20 minutes. He shot 7-of-15 from the field. He also had six rebounds and two assists. On New Year’s Day, Davidson-Davie Community College downed the Flyers 95-56 at Brinkley Gymnasium. McMullin had five points in ten minutes. McMullin, a freshman, is averaging 13.1 points per game over 20 games. Sandhills is 14-6 overall, 4-0 in Region X. McMullin is the last Orange player to score 1,000 points for his career. He accomplished that feat in his senior season during the 2019-2020 campaign.

Connor Crabtree: The Richmond Spiders men’s basketball team faced possibly the hottest team in the country on Friday night. The Davidson Wildcats won its 13th consecutive game after a 87-84 victory over the Spiders at the Robins Center. Crabtree came off the bench for Richmond to play three minutes. He knocked down his only shot from the field and finished with two points. On January 5, the Spiders defeated Massachusetts 80-72. Crabtree played eleven minutes against the Minutemen and scored five points. He shot 2-for-2 from the field, including his only 3-point attempt. Richmond scored 50 points in the first half, shooting 65% from the field. It was the most points in a half by the Spiders since March 2020. Richmond opened 2022 with a 76-69 loss to St. Louis at Chaifets Arena. Crabtree played seven minutes and scored two points and grabbed a rebound. Richmond’s game against George Mason, scheduled for January 11 in the Robins Center, was postponed due to COVID issues within the Patriots program. Richmond is 10-7 overall, 1-3 in the Atlantic 10. They will travel to Fordham on Tuesday. Crabtree started his college career with Tulane before transferring.

Braden Homsey: The Division III Ferrum Panthers wrestling team ended 2021 in the the Citrus Invitational in Fort Lauderdale, FL. Homsey, seeded #2 at 197 pounds, went to the finals. In the semifinals, Homsey edged Chance Lapier of Castleton University, who was seeded #3, 4-3 to advance to the finals. in the championship match, top-seeded Bentley Schwanbeck-Ost of Augsburg University defeated Homsey 10-4 for the championship. After receiving a bye in the opening round, Homsey defeated Sean Gillespie of Liberty University 14-1. In the quarterfinals, Homsey scored a technical fall over Tyler Raway of Augsburg 16-0 in 4:40. Ferrum placed 8th out of 12 teams in the tournament. Homsey placed the highest of any of the other Panther wrestlers.