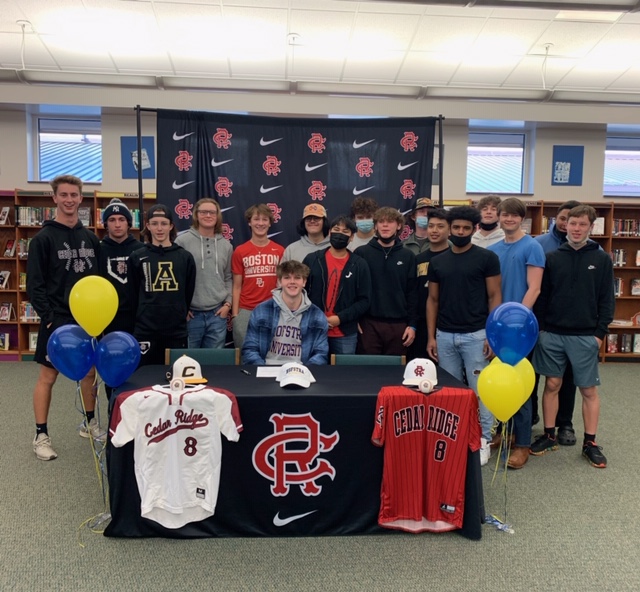 Aidan McAllister has had a long relationship with baseball. It didn’t start well.

“If I’m being honest, when I first started playing baseball, I was not good at all,” McAllister said. “I was originally a soccer player and I enjoyed that. It was my stepbrother who got me into baseball.”

Somehow, McAllister made the Hillsborough Youth Athletic Association Hawks in Hillsborough when he was ten years old, but his relationship with the game hasn’t always been smooth over the years. There were time he wanted to quit.

Yet baseball is a game of failure. In the Major Leagues, the best teams will lose 60 times a year. The worst teams usually win 60 times.

Bryson Massey, McAllister’s head coach at Cedar Ridge High School, was barely out of his mother’s womb when his beloved Atlanta Braves lost 97 games in 1990. The next year, they won the National League West and got within one win of a World Championship.

Though he’s been tempted to walk away, like any relationship worth preserving, McAllister have found that baseball is the thing he can’t leave behind.

“I wasn’t as gifted as others,” McAllister said. “I felt like I had to work a lot harder at it. I just wanted to prove to everyone else that I could be good at it. You have to be very mentally strong to play baseball. I’ve done things during slumps that I thought would help me and it only made me worse. I’ve learned from it and it had made me better.”

Massey, Cedar Ridge Athletic Director Andy Simmons and Principal Dr. Carlos Ramirez were on hand for the ceremony, along with McAllister’s teammates and other students.

“He’s a kid that’s going to outwork a lot of people,” Massey said. “We’ve talked a lot about focusing on proving some people wrong. We talked about that at the end of last season. Last summer, he got in the gym and worked on his body and his swing. He got a lot better at baseball and that’s what you have to do.”

While his high school career has consisted of just 16 games over two seasons because of the pandemic, McAllister has continued to work on his game as a first baseman with Cedar Ridge and the Canes Baseball showcase squad during the summer.

“It was definitely the coaching staff,” McAllister said of his reason for committing to Hofstra. “I formed the best relationship with them. I really enjoyed the Hofstra campus. The school is definitely different from North Carolina. it was very big. It was more rural than I expected.”

Officials from the University of Maryland-Eastern Shore and various schools across North Carolina had also contacted McAllister about playing.

McAllister briefly played with Team Elite, a showcase team coached by Andrew Cook, who spent last season as the Director of Baseball Operations with North Carolina Central. The Eagles’ shut down its baseball program in June.

Before classes at Cedar Ridge, McAllister is a daily morning presence at the Edge Sports Complex in Durham, where he’s worked on the mechanics of his swing.

“When I came here, we set a plan to reach his goals,” said Massey. “I’ve spent a lot of time with him on and off the field. Throughout this offseason and into the fall, we really focused on finding somewhere to fit him. We talked back-and-forth and felt that Hofstra was the best school that gave him what he needed and the opportunity he deserved.”

Though McAllister hasn’t had as much time in a Red Wolf uniform as he would hope through his first three years at Cedar Ridge, he credits Massey with helping him grow into a Division I-caliber player.

“I was pretty immature when I first came to high school,” McAllister said. “He helped me in that aspect. Maturing was a big part of it for me. That helped a lot. He’s also given me a lot to work on, like with drills. He’s helped me with the recruiting process.”

Next spring, McAllister will get a chance to play a full schedule. It’s something he hasn’t done at Cedar Ridge. The Red Wolves’ season begins at Chapel Hill on March 2.

“I definitely want to make a statement and show my ability,” McAllister said. “I’m just going to continue to put in the work.”