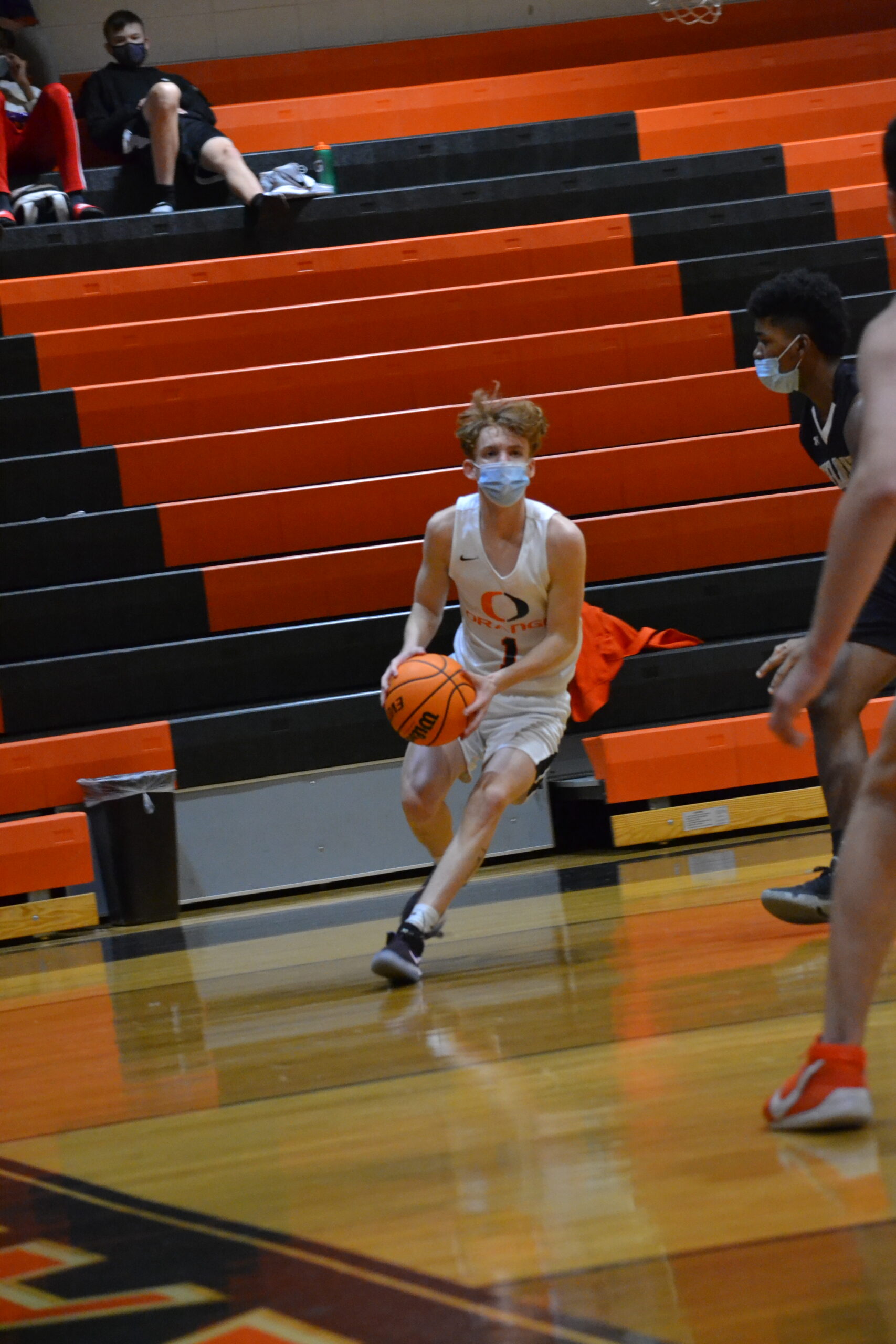 DURHAM–As Jerec Thompson stepped out of the visitor’s locker room after his first game of the season, he was greeted by two students from the North Carolina School of Science and Math.

At a time when even the most basic facts are prone to violent disagreement, these students didn’t want trouble after Orange had defeated their home team.

They waited ten minutes after the game to get Thompson’s autograph. They had Sharpies, but no paper.

So Thompson obliged them by signing his first autograph on one fan’s forehead. The other received a signature across his forearm

That was one of several firsts for Orange’s senior guard on Thursday night. It was his first game of the season after a near catastrophic fall in a scrimmage against Vance County at Franklinton High School on November 20 as he went up for a dunk. After several MRIs at Duke Hospital, it caused him to miss Orange’s opening games against Southern Alamance and East Chapel Hill.

Clamoring to return, Thompson didn’t exactly settle into the new season. Instead, he recorded a career-high 41 points on a night both exhilarating and strange as Orange defeated Science and Math 73-54 at Unicorn Gymnasium.

Thompson broke his previous career high of 32 points set on February 6 against Vance County in Henderson.

“I’ve been ready since I got hurt really,” Thompson said. “I’ve been antsy and ready to get back watching in practice. It’s been a little bit difficult.”

Thompson’s 41 points was the most by any Orange player since Connor Crabtree scored 44 points against Southern Durham in the 2017 Big 8 Conference Tournament championship game. Crabtree now plays for the Richmond Spiders. He also scored 40 points against Chapel Hill on January 5, 2017.

The game was a homecoming of sorts for Orange coach Darryl Britt, who simultaneously coached the Science and Math men’s and women’s basketball teams in 2013-2014. Thompson’s hot shooting didn’t overshadow the choppy nature of the game where 40 fouls and two technical fouls were whistled. At one point in the first half, the Unicorns were awarded possession twice in a row after held balls, which led to Britt picking up a technical.

Britt was whistled for another technical in the third quarter after a borderline traveling call, leading to his ejection. His experience with Unicorns gymnasium led to him trying to watch the game from afar on the catwalk balcony over the gym. That didn’t last long. Within seconds, after Guan was fouled and went to the foul line, an official spotted Britt spying from the other end of the gym and ordered him into his locker room. The fact that Britt was wearing an Orange sweater inside a dark setting didn’t exactly make him the master of deception.

“I should have worn a disguise like Bobby Valentine did,” Britt joked afterwards, referring to the former New York Mets manager who once was ejected from a game, only to return to the dugout wearing a fake mustache.

With assistant William Dobbs filling in during an emergency situation, Thompson wouldn’t let Orange lose. He scored 29 points in the second half.

Orange bolted out to a 15-points lead behind six early points from backup center Hunter Burch, who played the national anthem with an electric guitar before Tuesday’s game against East Chapel Hill. The Unicorns went on an 8-0 run, though they only scored one field goal in that span. Jackson finished the half strong for Orange. He sank two free throws, then stole an inbounds pass and scored on a lay-in to put the Panthers ahead 34-23 at halftime.