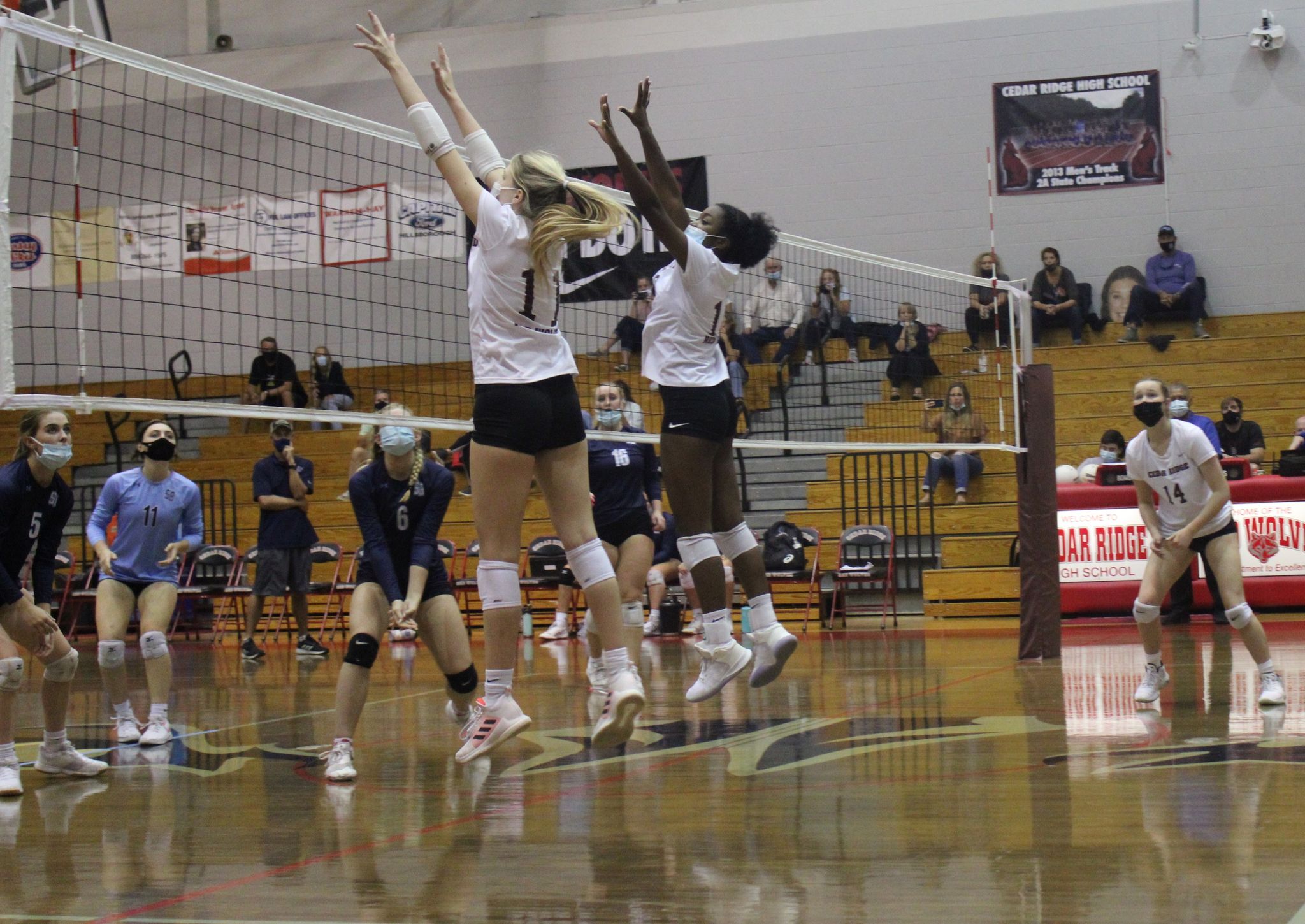 For the first time since 2015, the Orange volleyball team has advanced to the 2nd round of the 3A State Playoffs.

On a busy Saturday afternoon across Hillsborough, the Lady Panthers defeated West Johnston 3-0 in the opening round of the NCHSAA State Playoffs at Panther Gymnasium. Orange (11-9), hosting its first state playoff match in nine years, prevailed over the Wildcats on scores of 25-23, 25-17 and 25-19.

Across town, the top-seeded Cedar Ridge Red Wolves had no problem with the 32nd-seeded South Brunswick Cougars 3-0. The Red Wolves (26-2), who have already set the school record for wins in a season, prevailed on scores of 25-8, 25-8 and 25-12.

Orange will travel to face Wilson Hunt on Tuesday night. The Warriors (22-4), seeded #3, won the Quad County Conference championship with a 14-0 record. Hunt swept Triton in the opening round on Saturday.

Against West Johnston, Orange trailed 15-11 until Emma Wimsatt scored a kill off an assist from Caitlin Carden. Then junior Allie Wilkerson took over the match. She served 12 consecutive points for the Lady Panthers, including three aces. Wimsatt had four kills during the run, while Avery Miller had another. All five kills were assisted by Carden, who had 14 assists in the second and third sets. In a frame that had six ties and four lead changes, Miller scored set point on a spike that caught the center of the floor.

West Johnston jumped out to a 5-1 lead in the third set. Orange went on a 8-3 run to take an 11-10 lead off three kills by Miller. Kinzy Rowney and Wilkerson also had finishes.

Orange would take the lead with three straight points off kills by Wimsatt and Van Tiem. Wilkerson served the final three points for Orange, including an ace on match point.

It was Orange’s first home win in a state playoff match since they defeated McMichael 3-0 on October 20, 2012.

Cedar Ridge didn’t face a deficit against South Brunswick (4-14) until the third set. The Red Wolves scored the opening five points of the first set and led 6-0 in the second set. Cameron Lloyd finished with eleven kills, ten aces and nine digs, coming one dig short of a triple-double. Cameron Lanier had eight kills. Junior setter Julie Altieri finished with five aces and 13 assists. Rachel Alverson, who replaced Altieri as setter in the third set, had eight kills.

Lloyd racked up the opening three kills of the match. Altieri followed with consecutive aces. Cedar Ridge finished the opening set with eight of the last nine points, including a block by Lanier, followed by a kill by Lanier.

Altieri opened the second set with three aces. Lloyd had two kills, both assisted by Altieri, while Lanier scored another. Midway through the second, Cedar Ridge went on a 13-0 run, which included six assists by Lloyd, who finished with 10 aces.

Melissa Benkowitz, who had five kills and eight digs, notched a finish to wrap up the second set.

South Brunswick had a 3-2 lead in the third set, its only advantage the entire day. The Red Wolves quickly erased that with a 10-1 run.