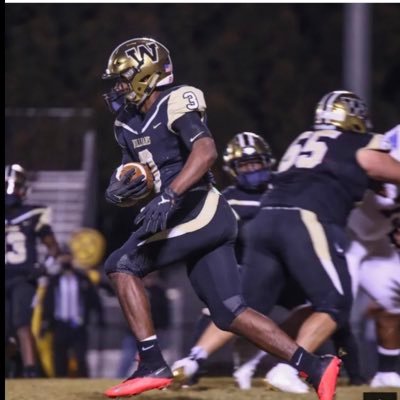 BURLINGTON–The only good news for Orange football coming out of Friday night is that they’ll never have to face Alijah Richmond again.

Richmond scored four touchdowns against Orange as Walter Williams defeated Orange 43-7 at Kernodle Field on Friday night in the second matchup between the two teams in 2021. Williams (5-4) will face Person next week in Roxboro. If the Bulldogs win, they will clinch its first winning season since 2013.

Williams is now assured of the 2nd automatic spot in the Central Carolina Conference for the upcoming 3A State Playoffs. On Friday night, Eastern Alamance defeated Northwood 38-0 in Mebane, which took the Chargers out of contention for surpassing the Bulldogs.

Richmond has scored eight touchdowns against the Panthers this year. On September 24, he scored four touchdowns in a 28-0 Bulldogs win at Auman Stadium in Hillsborough. On Friday, he finished with 150 yards rushing, just two short of his season-high of 152 set last week in a double overtime win over Western Alamance.

Friday night’s game, which counts as a nonconference game, was scheduled by Orange (2-7) in August to replace a spot vacated by Cedar Ridge, which didn’t field a varsity team this season.

It was another anemic offensive night for Orange, which was limited to 37 yards total offense. The Panthers almost went the entire game without picking up a first down on its own accord (there were four first downs via Williams’ penalties). Orange’s only bright spot offensively came after linebacker Jackson Wood somehow swiped a pitchout from Williams’ backup quarterback Dan Mahan to running back Kylel Richmond and rumbled all the way to the Williams 30-yard line.

Backup quarterback Ty Walker threw to Wynston Brown for a 30-yard touchdown with 2:01 remaining. That was Orange’s only first down of the night.

It was the sixth time this year that Orange was held under 150 yards total offense. Last week, the Panthers could only muster 90 yards and two first downs at Northwood.

“We’re playing against one of the best defenses in the county,” said Orange coach Van Smith. “They’re big and strong up front. They handled us on both sides of the ball really. Their offense has so many weapons all over the place. They can spread you out and still run it between the tackles.”

Four weeks ago, Williams mainly kept the ball on the ground to wear Orange down in Hillsborough. On Friday, quarterback Jaelen Brown threw for 153 yards and was more eager to run out of the backfield.

Williams’ scored touchdowns on its opening two drives. The Bulldogs went 57 yards on just four plays on its first series. Brown scrambled up the middle for a 12-yard touchdown, his first rushing score of the year, to start the rout.

After Orange went three-and-out on its first possession, Williams didn’t even face a 2nd down leading to its second touchdown. Brown hit leading receiver Isayah Ramsey for gains of 13 and 12 yards, leading to Richmond’s first touchdown run from one yard out.

Orange made a goal line stand at the end of the first quarter. Williams had a 4th-and-goal at the Orange 1-yard line, but Richmond was held out of the end zone by Wood and linebacker Ronald Cooper.

The second quarter scoring was dictated by, of all people, Williams’ defensive tackle Sam Rhodes. As Orange punted out of its own end zone to start the second quarter, the ball went off the foot of the punter straight up in the air. Rhodes won a scramble for the loose ball like he was Anthony Davis positioning for a errant jump shot, then staggered two yards into the end zone for a touchdown.

On the subsequent Orange drive, Rhodes sacked Panthers quarterback Jared Weaver for a safety to put Williams ahead 22-0.

Richmond scored the rest of the Williams’ touchdowns on runs of 26, five and five yards.

Orange will conclude its season against Eastern Alamance next Friday in Hillsborough. The Eagles have won six in a row.

“We’re going to go out and enjoy the last time we’ll get together as a team,” Smith said. “It will be the last time we get to come out under those Friday night lights and hear the roar of the crowd.”