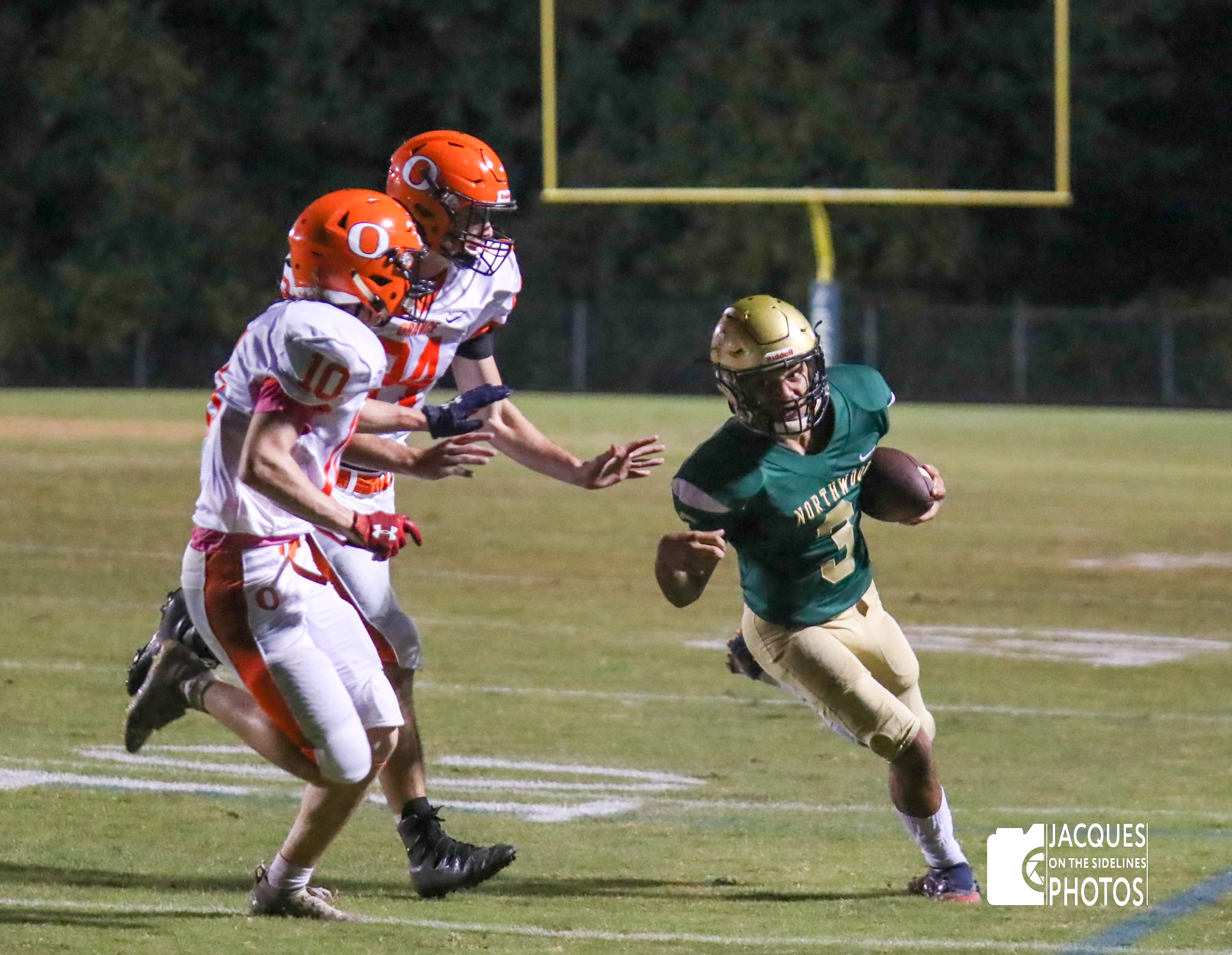 PITTSBORO–In the post-Pat Moser era of Orange football, the Panthers’ most competitive rivalry has been with Northwood.

In March, the Chargers prevailed 10-7 when Aidan Laros scored all of Nortwood’s points (a touchdown, the extra point and a field goal). In the fall of 2019, Orange trailed 24-6 before Machai Holt and Omarion Lewis triggered a comeback and the Panthers won 31-30 in overtime at Auman Stadium.

On Friday night, both Orange and Northwood met again, this time as members of the Central Carolina Conference. It wasn’t nearly as dramatic.

The Chargers used its power-I offense to dominate a battle of attrition, reducing Orange’s manpower to a nub and prevail 34-6 in front of a packed grandstand at Charger Stadium. Northwood (4-3, 2-1 in the Central Carolina Conference), which got all 363 yards of its offense on the ground, was led by senior tailback Jalen Page, who ran for 162 yards. Senior backup Ryan Hilliard rushed for 137 yards and three touchdowns the Chargers beat the Panthers for the second time in seven months.

The only positive aspect for Orange was that linebacker Jake Wimsatt was Northwood’s leading receiver. You read that right. With 6:46 remaining in the first quarter, after Orange punter Darius Satterfield booted a 47-yard punt to back the Chargers up to its own 4-yard line, Wimsatt picked off a pass from Northwood quarterback Carson Fortunes and returned it 13 yards for a touchdown.

Orange finished the first quarter with a 6-0 lead. They held Northwood without a first down and had just 12 yards total offense in the opening 12 minutes.

From the start of the second quarter to the end of the night, Northwood outgained Orange 351-67. Using a running game that was as successful as it was repetitive, the Chargers ran 52 plays in the final three quarters compared to Orange’s 21.

“It was the same old story,” said Orange coach Van Smith. “We play a team like that’s so big up front and we’re not big. We just got hammered on both sides of the ball.”

After being stymied by Orange’s defense, led by tackles for losses by Kameron Harshaw and Connor Ray, Page opened the second quarter with a 14-yard gain by Page on its first play from scrimmage for the Chargers’ initial first down of the game. From that point forward, Northwood scored on five of its next seven drives. The only two exceptions came when the Chargers took knees to end the first and second halves.

“They had a power formation with two tight ends and just started pounding away,” Smith said. “There wasn’t much we could do.”

Northwood faced a 4th-and-8 from the Orange 34-yard line where Fortunes ran around left end on a designed keeper for eleven yards. Freshman Gus Ritchey scored on a 12-yard burst up the middle to tie the game.

The Chargers took the lead with 2:41 remaining in the first half off a 7-play, 63-yard drive. After Paige gained ten yards on 2nd-and-7, Fortunes scored on a 2-yard quarterback sneak. Holder Jack Spotz threw to backup quarterback Kirk Haddix on the 2-point attempt to put the Chargers ahead 14-6.

Despite starting two drives in the opening quarter inside Northwood territory, the Panthers didn’t chain together two first downs in the same series all night. The Panthers finished with only three first downs, one of which came when quarterback Jared Weaver threw to wide receiver Wynston Brown for a 24-yard gain after the final points had scored.

Northwood opened the second half with a 14-play, 88-yard drive. Hilliard had four consecutive carries to cross the 50-yard line, and scored the first of his three touchdowns from ten yards out. Hilliard added touchdown runs of 28 and six yards in the fourth quarter.

Orange (2-6, 1-2) is now guaranteed its fourth consecutive non-winning season. They will travel to face Walter Williams in a nonconference game next week in Burlington. The Bulldogs defeated the Panthers 28-0 on September 24 in Hillsborough in Orange’s CCC opener.