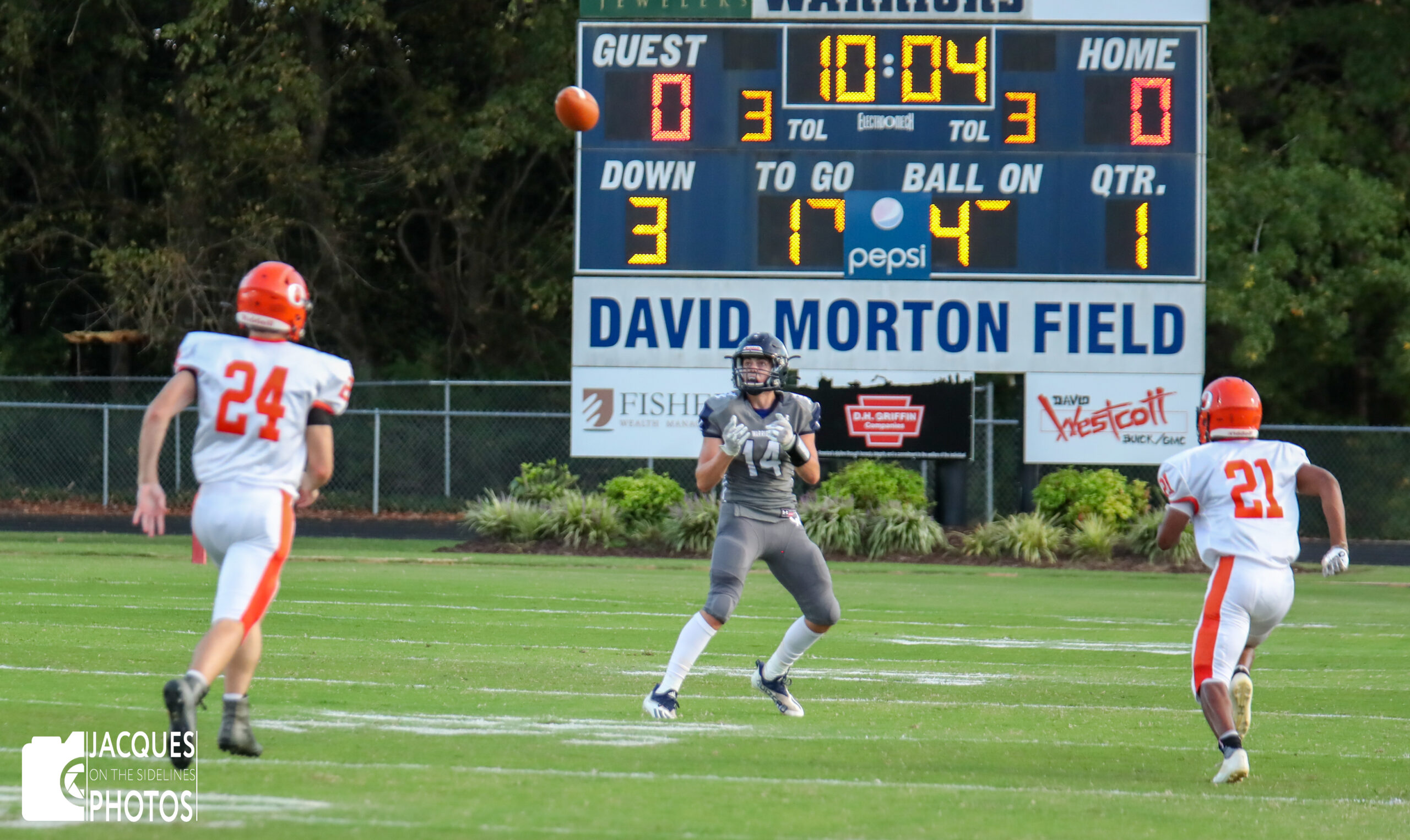 ELON-The home team walked through the stands during its entrance onto David Morton Field while a crowded grandstand cheered them, even during its worst start in decades.

There were sponsor banners stretched out from one end of the home fencing to the other, with even more in the end zone. It was enough patronage to make a NASCAR executive proud.

Even after the Western Alamance Warriors cruised to a 44-7 win over Orange, the night was hardly over. Parents played catch with their kids while the Homecoming court and cheerleaders gathered around the Warrior football team in a victorious huddle.

These were the images of Orange football’s new league. In its first game in the Central Carolina Conference, the Panthers couldn’t have looked more rattled and overmatched. Western Alamance, which hasn’t lost a conference opener in the ten-year stint of head coach Jeff Snuffer, looked right at home as they should have.

It was Snuffer’s 110th win as Western Alamance head coach.

After piling up a season-high 402 yards total offense and 21 first downs in last week’s win over Granville Central, Orange was held to 131 yards and seven first downs.

The Warriors, which had dropped its opening three games against Northern Guilford, Southern Alamance and Reidsville by a combined score of 125-28, put Orange on its back minutes after the opening kickoff and kept them there.

“We got off to another bad start,” said Orange coach Van Smith. “We weren’t executing. We got on ourselves early. All the Homecoming activities is great for what goes on beyond the field. But we let it get to us on the field. We have to more leadership from our coaches and our players.”

For the third time in five games, Orange gave up a touchdown on its opening drive and played uphill from that point forward. After Orange nose tackle Kameron Harshaw dropped Warriors running back James Newton for a 7-yard loss to force a 3rd-and-17, Wagoner threw to Kaden Wilborn for a 48-yard reception to invade the Panther red zone. On the next play, Wagoner danced up the middle for a 12-yard touchdown.

Orange fumbled on its next possession, which was recovered by Western Alamance’s Jordan Lambert. It led to Ty Belles scoring on a three-yard run.

After another 3-and-out by Orange, Hogsed rushed up the middle for a 22-yard score. Jacob Carter’s extra point put the Warriors ahead 20-0, and the Panthers hadn’t even picked up a first down yet.

Orange’s only substantial drive of the first half was aided by three offside penalties against the Warriors. After quarterback Jared Weaver hit running back Nathan Sorrells for a 5-yard gain, Orange attempted a 32-yard field goal, but it missed wide left as the first half expired.

The only saving grace on the night for the Panthers came when Weaver found tight end Jake Wimsatt for a 52-yard touchdown pass midway through the fourth quarter. Wimsatt made the catch along the Orange sideline, then ran across the field and beat the rest of the Warriors pursuit in order to avoid a shutout. Darius Satterfield added the extra point.

In the third quarter, Wagoner scored on an 11-yard touchdown run, while Hogsed burst up the middle for a 39-yard touchdown. Jacob Carter added a 34-yard field goal.

With its regular season halfway done, Orange looks ahead for the first of two meetings against Walter Williams. Next Friday’s game in Hillsborough will count in the conference standings, while the matchup on October 22 in Burlington (which replaced the scheduled date with Cedar Ridge, which is not fielding a varsity team) will be a nonconference game.

“Everybody has to get better on our side,” Smith said. “We have to have leadership from everyone right now because we didn’t get it tonight.”