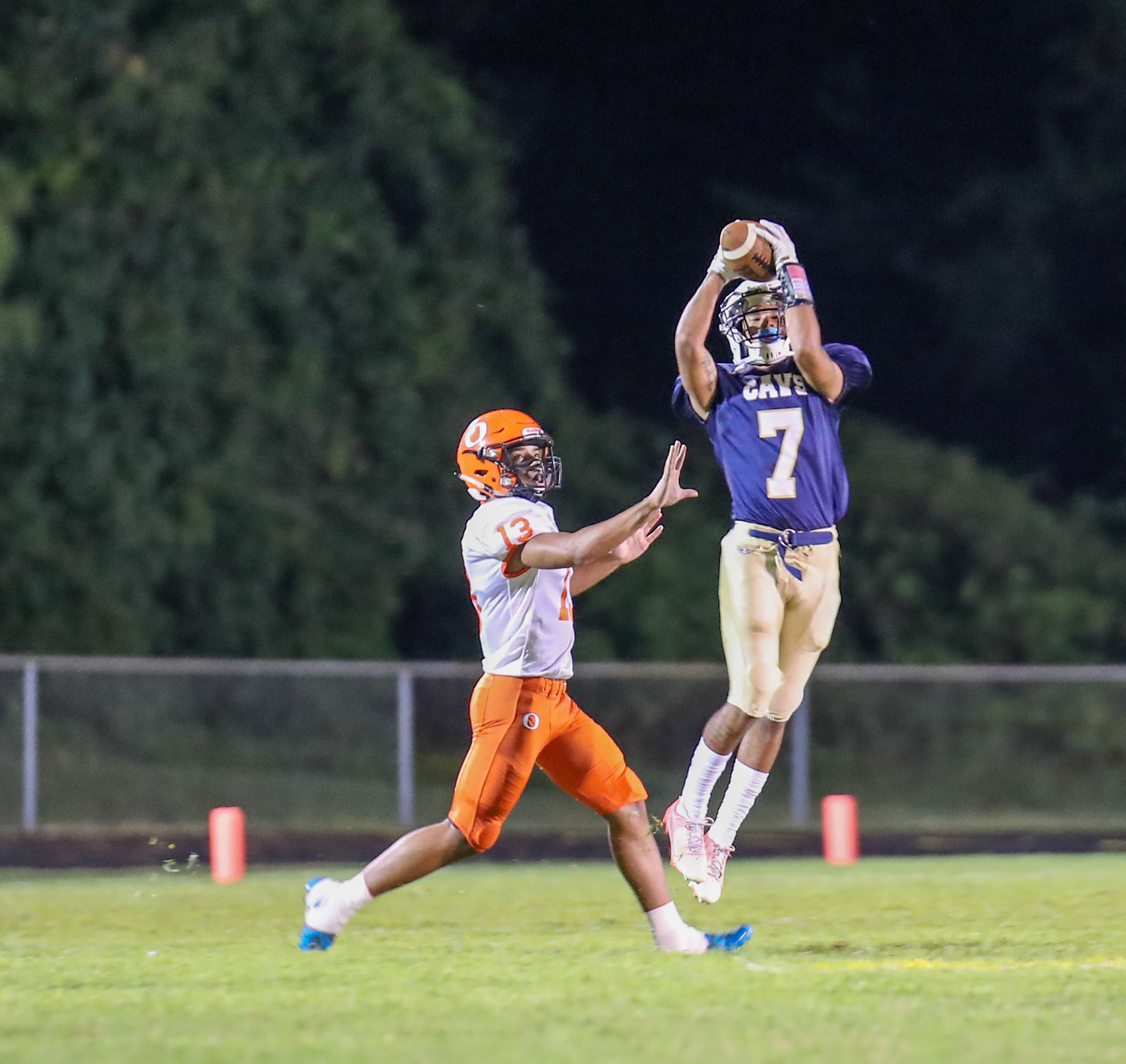 In the midst of its most lopsided regular season loss in recent memory, the Orange football team (0-3) harkened back to its glory days to bring some amount of hope to a tenuous situation.

Cummings quarterback Tylek Oliver had put on a clinic against the Panthers in the first half at Cavaliers Stadium. He engineered five touchdowns in five drives against an Orange defense lacking in speed and size. Oliver’s only mistake came on the final play of the first half when he was sandwiched between an Orange defender and the ground.

The first half clock expired and Oliver’s teammates started to go to the locker room content with a 40-6 lead. Oliver didn’t get up. His only movement came from his legs and remained face down.

He remained that way for roughly 35 minutes.

The scene was reminiscent of a sequence across two nights of Van Smith’s first year as Orange head coach in October 2017. In a junior varsity game against Hillside, Thys Oldenburg suffered a brain injury. Oldenburg remained in a hospital for two months before he returned home just in time for the holidays.

The following night at Russel Blount Stadium in Durham, Orange running back Marvante Beasley was knocked unconscious following a run up the middle. As Beasley remained motionless on the ground for several minutes, Hillside coach Ray Harrison told his team to kneel in prayer for the Orange running back, an act of goodwill that scoured a noticeable amount of tension that had quickly built between the two teams.

With Oliver on the ground Friday night, Smith followed Harrison’s example four years later. The entire Orange team kneeled in prayer for Oliver just a few yards away from where he was treated before he was finally removed from the field on a stretcher. Oliver was carried off in an ambulance, around 20 minutes after halftime had expired.

“That run through my mind,” Smith said of the scenes from four years ago. “We’ve been there and knew what it was like. Our thought and prayers are with him and everyone else at Cummings.”

The game itself was the polar opposite of Orange’s last trip to Cummings in 2016, when the Panthers romped past the Cavaliers 48-0 behind touchdowns from Beasley, Payton Wilson and Ryan Puckett.

Five years later, the Cavaliers were the ones with the decided talent edge. Before he was carried off the field, Oliver threw four touchdown passes to wide receiver Dylan James. Cummings (2-0) defeated Orange 54-12, even with Oliver absent from the second half.

From the first play from scrimmage, when Oliver found James for a 39-yard pass to break into the Orange red zone, the Cavaliers left no doubt that it would be a long night for Orange. Cummings scored three touchdowns in the first quarter and didn’t even face a third down on any of the series.

“I think were were surprised by their speed early,” Smith said. “We froze like a deer in the headlights and it just snowballed from there. Just trying to find a ray of light. I think the kickoff return team got better because they got a lot of reps.”

Oliver’s first touchdown pass to James came on a slant from one-yard out with 9:33 remaining in the first quarter. Oliver’s most potent weapon was sophomore running back Jonathan Paylor, who has garnered plenty of attention on the recruiting trail. After Oliver hooked up with James o a 15-yard touchdown pass with 5:43 remaining in the first quarter, Paylor ran in the 2-point play to put the Cavaliers ahed 16-0 and they were just getting going.

Orange’s only offensive touchdown came midway through the second quarter. Senior running back Omarion Lewis concluded an 8-play, 55-yard drive with an 11-yard touchdown run, his second of the year.

Without Oliver in the second half, Cummings’ stagecoach of an offense turned into a pumpkin. Oliver constantly fielded low shotgun snaps and had enough poise and skill to make big plays. Without a magician like Oliver, the Cavaliers basically turned the offense to Paylor, who simply fielded shotgun snaps seven yards from center and ran sweeps for much of the second half.

One errant snap was recovered in the end zone by Orange linebacker Jabari Albright for the Panthers’ last touchdown.

At one point, another poor snap turned into a scene straight from a 1992 Super Tecmo Bowl game with your best friend as a troll playing with the Los Angeles Raiders. Paylor had the ball go over his head. Doing his Bo Jackson impression, Paylor ran backwards 25 yards to get the ball, then ran forward to convert a 2nd-and-14. He ultimately scored a touchdown to finish the drive. Paylor ended the night with 137 yards rushing.