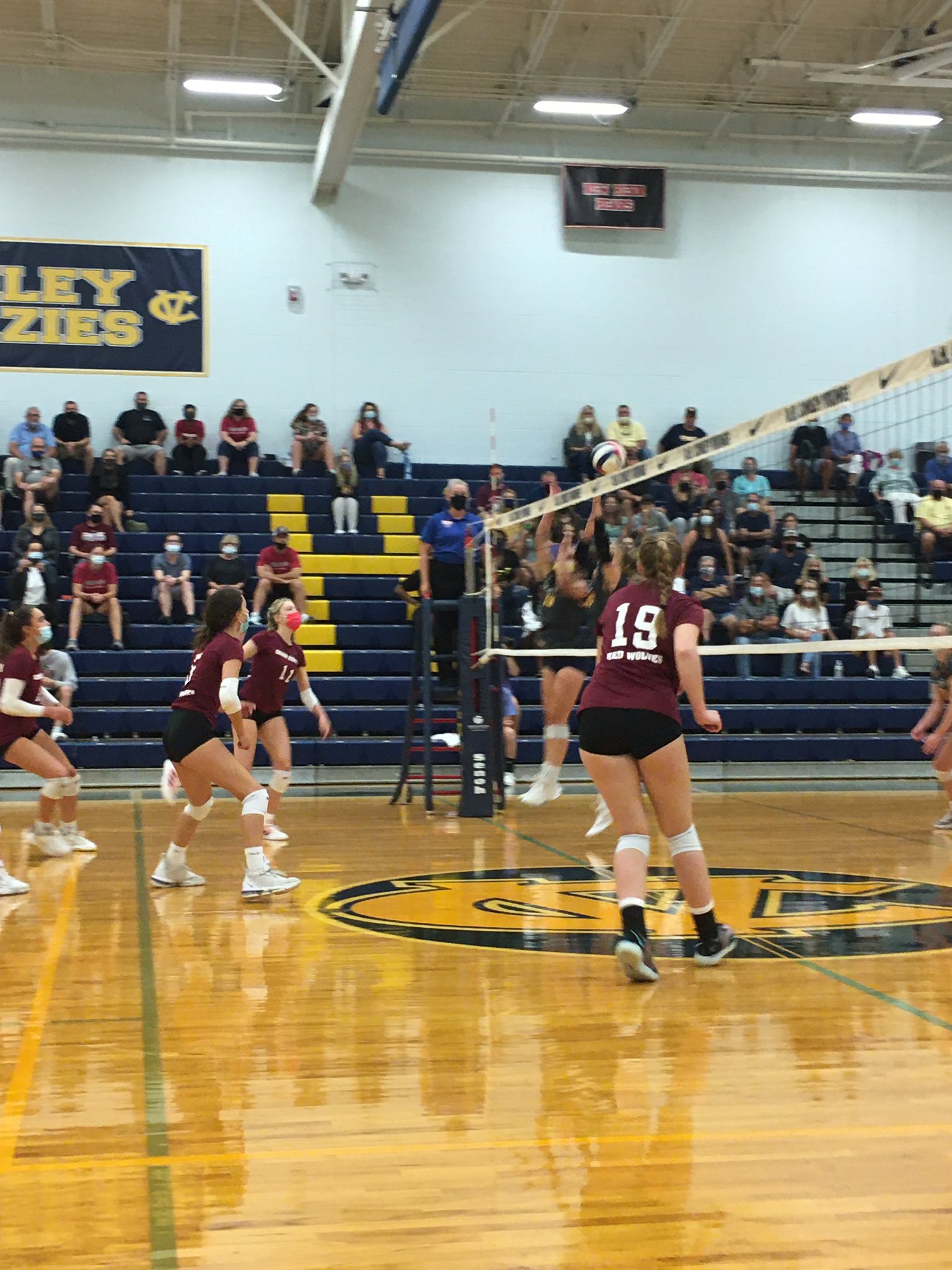 While many schools welcomed back high school football on Friday night, the Cedar Ridge volleyball team was busy serving notice to the rest of the state.

And they did it in hostile territory at the scene of its only loss from last year–against the defending 3A State Champions.

It wouldn’t be fair to call this a breakthrough victory. Cedar Ridge had one of those in 2019 when they beat defending 3A State Champion Chapel Hill in Hillsborough to open the Big 8 Conference season. Back then, Cameron Lloyd, Cameron Lanier and Julie Altieri were all freshmen.

After reaching the state playoffs in 2019, then winning the Big 8 title last winter, this edition of Red Wolves volleyball has started 2021 with the intention of ending with something bigger.

Last January in the same location, Conley defeated Cedar Ridge 3-1 in a gym that was 85% empty as pandemic restrictions were still in place. While the stakes in Friday’s game were nowhere near as big, Cedar Ridge’s win came in a much more imposing atmosphere.

About three rows of students, decked out in Hawaiian shirts and dubbed the “Conley Crazies” by a banner hanging about the bleachers, were positioned directly across from the Red Wolves. They yelled as Cedar Ridge players served, but if it impacted the Red Wolves, they didn’t show it in the slightest.

Instead, Cedar Ridge Coach Fiona Cunningham and the reserves on the bench rejoiced in the silence that followed whenever Lanier or Lloyd slammed down a point against the hardwood floor of the Vikings’ gym.

“Lloyd and Lanier did an awesome job along with a few others hitting the ball,” Cunningham said. “But it was a team effort. Julie Altieri was great serving and so was Lauren Cecil.”

Conley, which won its opening matches against Heritage and Hoggard in three sets, opened with a 4-1 run in an opening set that had seven ties and five lead changes. The difference between January’s loss and Friday’s win for Cedar Ridge was a wider array of finishers and better execution. With the first set even 17-17, East Chapel Hill transfer Melissa Benkowitz stepped up with consecutive aces that spurred a 4-0 Red Wolf run. Sophomore Addie Reid had her only kill of the match, followed by another spike by Lloyd to put Cedar Ridge ahead 20-17.

Conley responded with three consecutive points to even the set at 20-20, but Lloyd slammed home a kill off an assist from Altieri, which started a string of five straight Red Wolf points. After an ace by Young, Lloyd scored set point as Cedar Ridge wrapped up the first frame 25-20.

“We have a strong, confident team,” Cunningham said. “It was a team effort and everyone had a vital role to play. We are not taking anything for granted and play every game to the best of our ability. The coaching staff is working hard to establish a positive and winning program.”

Cedar Ridge didn’t trail in the second set. They jumped out to a 4-0 lead behind two kills from Lanier and another from Lloyd. After the Vikings reduced its deficit to 9-7, Benkowitz notched a kill to return serve to the Red Wolves, then scored an ace that hugged the inside right line. Lloyd had consecutive finishes to push Cedar Ridge’s lead to 14-8.

Three straight Cedar Ridge returns that wound up in the net reduced its lead to 17-16, but Lanier came up with a strong block to end the run. Lanier registered back-to-back kills to increase Cedar Ridge’s lead to 20-17.

After Conley closed to 22-20, Lloyd teed off on a spike set up by Altieri, which wound up off the hands of a Viking and into the seventh row of bleachers. After Lanier set up another Lloyd kill, Lanier would finish the set with a spike that went off the hands of a blocker and bounced aimlessly off the court to give Cedar Ridge a 25-21 win.

The Red Wolves (3-0), who defeated Riverside in its home opener on Monday, will face Northern Durham at Red Wolves Gymnasium on Monday night. They will travel to perennial 2A power Carrboro on Wednesday.