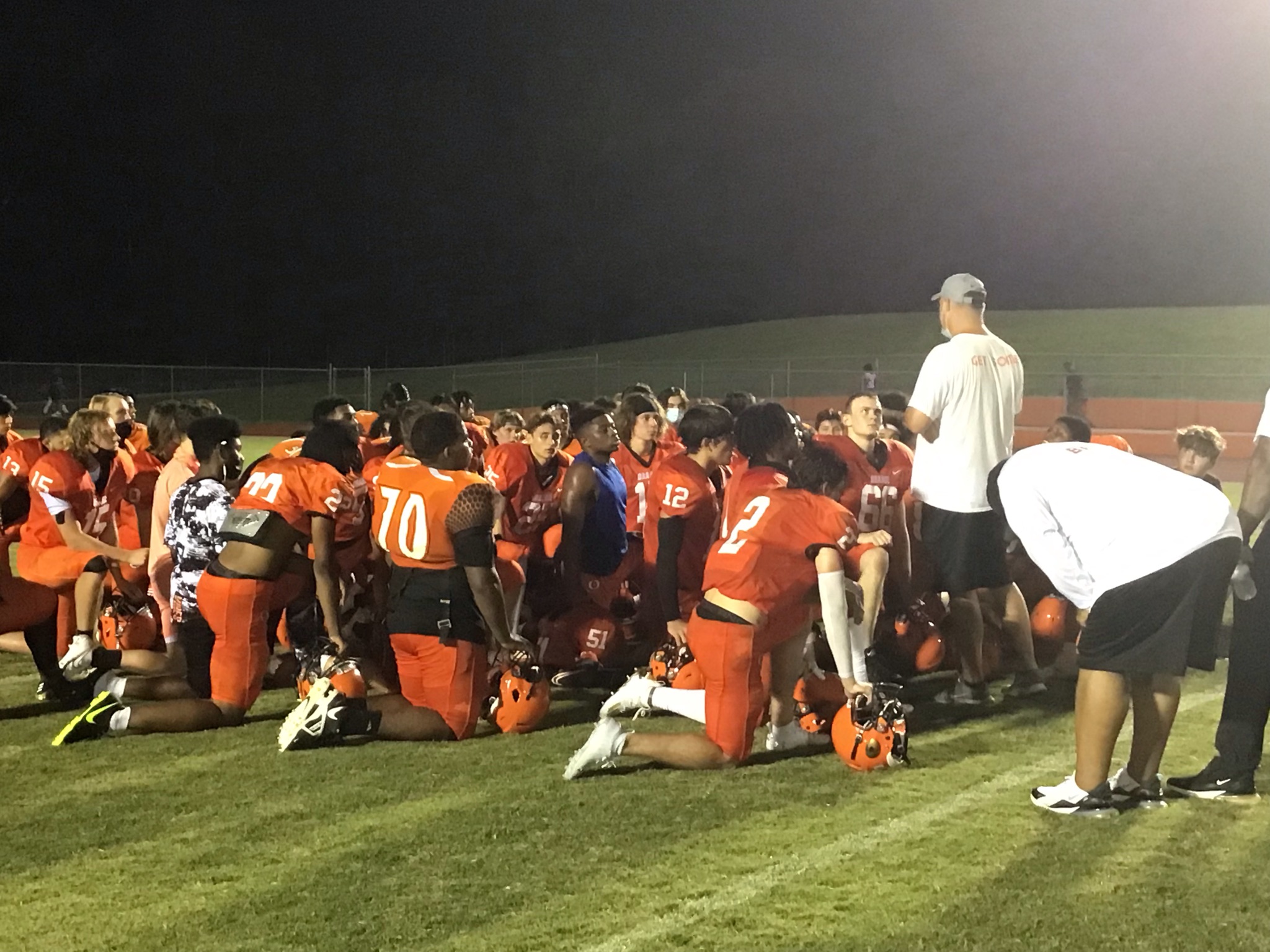 The spring football season was an exercise in learning for Orange’s offense.

The team had a total extreme makeover after the first week, when the starting quarterback left the team following a season-opening loss to Southern Durham. Coach Van Smith inserted linebacker Jayce Hodges at quarterback in preparation for a road trip to Northern Durham. That’s despite the fact that Hodges had not played quarterback since his 8th grade year at Stanford Middle School.

Over the subsequent four practices, offensive coordinator Marty Scotten engineered a crash course in the double wing offense. After years operating out of the shotgun, Orange resembled a 1940s service academy team moving at the pace of a chess match.

But it worked. Orange stunned Northern Durham 7-6, beating the Knights for only the fifth time since 1968.

Smith and Scotten used the pandemic-mandated spring season to teach their team how to crawl under the new offense. For 2021, they want to move closer to a sprint.

In a scrimmage against Riverside on Friday night at Auman Stadium in Hillsborough, the Panthers scored two touchdowns. Pacing was more rapid between snaps under starting quarterback Wynston Brown, who was the starter for Orange’s junior varsity squad last spring The Pirates, under the direction of former Cedar Ridge head coach Cory Lea, committed three turnovers and were held to three first downs.

The scrimmage, which didn’t start until 8PM because of excessive heat, was limited to 30 plays for each varsity offense.

With Brown at quarterback, Orange scored first. On the opening drive, sophomore running back Nate Sorrells had a 15-yard run, which set up Brown’s 25-yard touchdown pass to senior tight end Brendon Worsham.

“We were trying to go faster,” Smith said. “It’s hard to simulate game speed in practice for both our offense and our defense. So we have a ways to go on that. We hope to get more crisp and pick up the pace as needed. If we can get to where we can go really, really fast, then it’s easier to slow it down when you have to. As opposed to when you go slow all the time, it’s more difficult to pick it up.”

Jared Weaver and Ty Walker played quarterback for Orange in its second and third series, respectively.

Senior Elijah Danley, who was a long jumper for Orange’s track & field team last spring, had two interceptions, which helped keep the Pirates scoreless during the brief scrimmage.

In a run-oriented offense, returning senior Omarion Lewis could stand to benefit. Lewis, who didn’t play last spring, was Orange’s leading rusher in 2019 with 784 yards and eight touchdowns. On Orange’s second drive, Lewis brought back memories of his sophomore year with a 64-yard touchdown gallop, the longest play from scrimmage all night.

To start his senior year, Lewis will journey back to where it all began–practically by accident. On August 23, 2019, Lewis entered the game in the third quarter after an injury to starter J.J. Torres. Up to that point, the coaching staff had penciled Lewis in for the junior varsity. Those plans changed after Lewis rushed for 127 yards, all in the second half, as the Panthers nearly came back from a 14-0 halftime deficit. The Vikings won 20-15 behind freshman quarterback Khawan Bobbitt, who engineered South Granville’s triple-option attack and scored two touchdowns.

When Orange journeys to Creedmoor on Friday, they will be without linebacker Elliott Woods and defensive tackle Dari’us Watkins, who both graduated in June. Both had played varsity for three years.

Jake Wimsatt, a junior linebacker who was a face-off specialist for Orange’s lacrosse team last spring, was back working out on the gridiron this summer. He will be one of the new faces that Smith hopes can fill the gap.

“We’re a little bit thin at some positions and obviously we have some big shoes to fill,” Smith said. “We’re young at some spots. A lot of guys from last year’s junior varsity team are coming up. It was good to see how they would perform against another varsity team. I was pleased tonight. We have some ingredients to bake the cake. So we’ll see if we can bake the cake.”