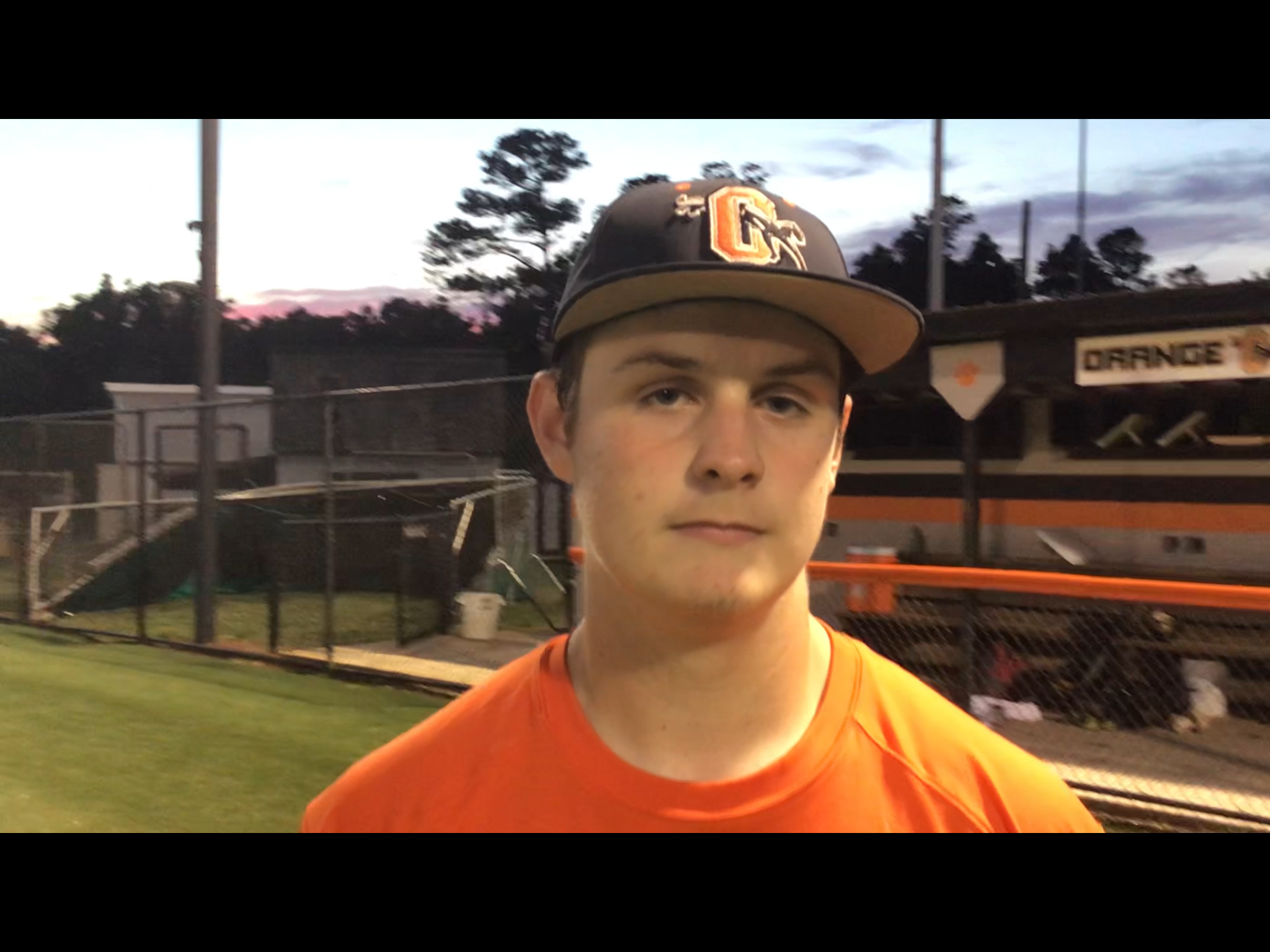 A 15-game hitting streak and being the most reliable presence behind the plate for Orange baseball since Brad Debo has to count for something.

For Davis Horton, it has led to being named the Big 8 Conference Player of the Year.

The junior was officially honored after a vote of the Big 8’s coaches at the conclusion of the regular season last Friday. Horton, who transferred to Orange from Riverside last summer, led the Panthers in three offensive categories in 2021. He had a .490 batting average with 24 hits and 15 RBIs. Horton also tied for the team lead with six doubles.

Horton had a base hit in every regular season game. It started with a three-run homer in his second at-bat as a Panther against East Chapel Hill on April 27, an 15-5 Orange win in six innings. In his first game with Orange, Horton went 3-for-5 with 5 RBIs with two doubles and the home run.

Horton’s hitting streak, which ended in last week’s opening round loss in the 3A State Playoffs at Asheboro, actually extended all the way back to his freshman year at Riverside. In the final game of the 2019 season, Horton went 2-for-3 as the Pirates defeated Southern Nash 18-0. In 2020, Horton played in two games before the season shut down due to the COVID-19 pandemic. He had hits against Wake County Home School and Green Level.

This season was Horton’s first full season as a catcher at the varsity high school level. He proved to be a steady presence for Orange pitchers Ryan Hench, Pierson Kenney, Jordan Underwood, and Joey Pounds. Horton didn’t concede a passed ball all year and only committed one error.

Horton supplied consistent offense throughout the season for the Panthers, who stormed out to a 5-0 start to secure a birth in the state playoffs for the 19th consecutive year. In a 19-9 win over Cedar Ridge on May 5, Horton reached in each of his first three plate appearances. In the first inning, he singled to left field to score Jackson Berini. Usually, senior Jacob Jones was the courtesy runner for Horton, which limited Horton’s total output to four runs. Horton went 2-for-4 against Cedar Ridge.

In Orange’s 10-1 win over Northwood in Hillsborough on May 7, Horton went 3-for-4 with 4 RBIs. The Panthers immediately took control with five runs in the first inning, which included Horton knocking in Conner Funk with a single down the left field line. In the second, Horton lined to right field to bring in Jackson Berini. Horton finished the night with a two-run single in the fourth.

Against Chapel Hill on June 4, Horton had a single in the first inning, which led to Jackson Berini scoring off a throwing error. Horton rounded the bases off another throwing error to put Orange ahead 2-0. They would go on to win 3-2.

There were three games where the hitting streak was in jeopardy with Horton was down to his final at-bat. In Chapel Hill on June 23, Horton was 0-for-3 when he had a two-out single, which later led to Jones scoring off a hit by Hench. Against Northwood on June 1, Horton was 0-for-2, but reached on an infield single to lead off the 7th inning. In the regular season finale against Northern Durham, Horton singled to right field in the sixth inning against the Knights’ Matthew Lombard, the co-Big 8 Pitcher of the Year.

Horton is the second consecutive Orange player to earn Big 8 Player of the Year honors. In 2019, shortstop Joey Berini earned the honor after he hit .541 with 33 hits, 26 RBIs and 12 doubles. Berini, whose younger brother Jackson starts at shortstop for the Panthers, now plays for the East Carolina Pirates.

The last Orange catcher to be named Big 8 Conference Player of the Year was Brad Debo in 2016. Debo, who would go on to play at N.C. State for four seasons, hit .446 with 29 hits and 24 RBIs in his senior season.