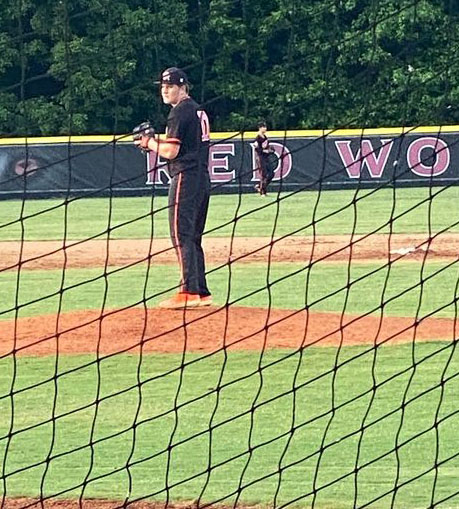 Why does it keep getting denied?

That seemed to be the question that Cedar Ridge senior catcher Tucker Cothran asked himself as he stared at the ground in left field while an assistant coach tried to console him after the most painful loss of his career.

It seemed like Cedar Ridge’s first baseball win over Orange since 2018 was a mere formality. They were the first team to score more than one run against Panther sophomore starter Ryan Hench all season. In fact, they put up six.

Did Cedar Ridge outplay Orange on Tuesday night? To put it mildly, yes. The Red Wolves’ hitting was more timely. Orange barely had any offense at all–until the end. In the resumption of a game suspended due to rain May 28, the Panthers had just one hit before the seventh inning after action resumed Tuesday night. Cedar Ridge rattled Hench to the point where he committed two balks, both directly leading to runs. Junior Will Berger resembled his older brother Phillip, the winningest-pitcher in school history, in delivering a fundamentally strong performance against his crosstown rival. It would have been a classic final Big 8 Conference game for the six Red Wolves seniors to finally beat Orange, and they were one strike away from doing it.

With two out in the seventh inning and Cedar Ridge leading 6-3, second baseman Conner Funk was saddled with an 0-2 count when he barely tipped a Berger fastball to the backstop. It seemed like it was delaying the inevitable at the time, but Funk would foul off another pitch before finally drawing a walk.

That started a string of nine consecutive Panthers to reach base.

After Hench drilled a double to left field to score Jackson Berini and Jacob Jones (running for catcher Davis Horton), to put Orange within a run, Orange third baseman Cezar Lozano was hit by a pitch. Then centerfielder Jaren Sikes had a 2-2 count, where the Red Wolves were again a strike away with the bases loaded. Sikes would go on to walk and tie the game.

Orange senior left fielder Tyler Lloyd, who started the seventh inning with a single to right field, hit a 3-2 fastball to left to score Hench and Mason Thompson (running for Lozano). And the floodgates were wide open.

After being shut out the prior four frames, the Panthers would eventually score eleven runs in the 7th to stun the Red Wolves 13-6 at Red Wolves Territory. It was a tense night where tempers flared between former teammates who now find themselves on opposite sides of the rivalry, as well as the coaches.

“That’s a first for me right there,” said Orange Coach Jason Knapp. “These guys can do that. It just took them a while to wake up tonight. We grew up tonight. Our young guys grew up and learned some valuable lessons”

It was the most disappointing result imaginable for the Red Wolves (5-8), who have lost five times this year when they’ve had the lead or the winning run on base during the 7th inning.

“It hurts so much because our guys have put in so much during the year,” said Cedar Ridge Coach Bryson Massey. “To judge come up three outs short against a team like Orange….This rivalry is one of the best baseball rivalries I’ve been a part of. You know it’s going to be a good game. It means a lot to each kid. That’s why it hurts. It does.”

Orange (10-3) has won four in a row. Senior Jordan Underwood replaced Hench on the mound in the fifth inning and earned his third win in 14 days. In two-and-two-thirds shutout innings, Underwood allowed one hit and two walks with four strikeouts.

“We leaned on our seniors,” Knapp said. “Jordan came out and pitched well. Jaren drew a walk late. The bottom of our order found a way to get on base and the hitting became contagious.”

The game resumed with Orange leading 2-1, but the Red Wolves jumped right on the Panthers with four runs in the third inning. Cedar Ridge loaded the bases after walks to Aidan McAllister and Bryce Clark, while B.J. Thornton was hit by a pitch. Centerfielder Garrett Ray sliced a 3-2 fastball to the right side of the infield to score McAllister and tie the game. Massey, who took his chances every chance he could on Tuesday, signaled for Thornton to steal home with Christian Macias at bat. As Thornton dashed for the plate, Hench committed a balk, much to the protest of Knapp, to put Cedar Ridge ahead 3-2. Macias out Cedar Ridge ahead 5-2 after he sent a dribbler into right field to bring in Clark and Ray.

Clark would add another run in similar fashion in the fifth inning. He drew a leadoff walk, stole second, and went to third on a sacrifice bunt by Ray. Like Thornton, Clark made a dash down the third base line, which led to Hench being called for another balk and Clark scored.

Berger kept the Orange offense in check most of the night. Until the seventh inning, Hench was the only Panther to reach third base. That came in the fourth after he drew a leadoff walk. The threat ended when Clark fielded a grounder hit by Jackson Berini and dove on second base to retire Lloyd, who had reached on a fielder’s choice. Horton, who went 3-for-4 and increased his hitting streak to 14 games, had Orange’s only hit after the resumption—until the 7th inning.

That’s when Lloyd started with a single to right. After a Berini walk, David Waitt flew out to left field. But Horton lined a double to left field to score Lloyd and trigger an epic Orange rally.

When the game started May 28, Clark hit a solo homer in the first inning, the first run that Hench allowed in four starts this season. Hench responded with a two-run homer in the second inning, just before the contest was suspended.

The game was also a benefit for Vs. Cancer. Organized by Massey wherever he’s served on a coaching staff, the event raised over $5,000 for the UNC Lineberger Comprehensive Cancer Center.

Afterwards, despite enduring the most painful loss of his young head coaching career, Massey sat down and had his head shaved at home plate for cancer awareness. This happened while the results of a raffle were announced, which included autographed merchandise from current Major League players, as well as gift cards from businesses throughout Hillsborough.

“I think baseball is one of the best sports to teach life lessons,” Massey said. “There are so many ups-and-downs. Tonight, it didn’t go our way. It hadn’t gone our way quite a bit. But you move on to the next day. You can’t dwell on what happened. It’s going to hurt, but it teaches you a life lesson. There are things in life that will be tougher than a baseball game.”