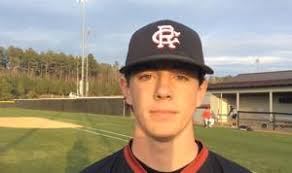 Phillip Berger: After completing the season with Division III William Peace University, Berger has started play for the Elizabethton River Riders of the Appalachian League. Following the reshaping of minor league baseball over the winter, the Appalachian League has rebranded from Rookie-level professional baseball into a collegiate wooden bat league. Berger has already collected two wins, including the first win in franchise history. On opening night for Elizabethton on Thursday, June 3, Berger earned the victory in a 5-2 decision over the Greenville Flyboys at Northeast Community Credit Union Ballpark in Elizabethton, TN. Berger came out of the bullpen to throw one-and-one-thirds innings. He surrendered one run on two hits with two strikeouts. On Saturday, Elizabethton defeated the Bristol State Liners 4-0 at DeVault Memorial Stadium in Bristol, VA. Once again, Berger pitched in relief and took the win after he threw two shutout innings. He surrendered one hit with one strikeout. Elizabethton is 2-2 and will host the Kingsport Axmen on Tuesday. Berger, the winningest pitcher in Cedar Ridge history, will almost visit his old hometown when the River Riders face the Burlington Sock Puppets (finally get to type that nickname) on June 22 and June 23 for a two-game series at Burlington Athletic Stadium.

Joey Berini: The East Carolina Pirates swept its regional series this weekend to open the NCAA Baseball Tournament. Early Monday morning, East Carolina defeated third-seeded Maryland 9-6 to advance to the Super Regional. It is East Carolina’s sixth regional championship since the current format was introduced in 2001. On Saturday, the Pirates defeated Charlotte 7-5 at Clark-LeClair Stadium in Greenville. In the 7th inning, Berini hit a pinch-hit single to left field to score Lane Hoover. It was Berini’s first RBI of the season. Berini was immediately replaced by pinch runner Ryley Johnson. On Friday, the Pirates came from behind to defeat Mid-Eastern Athletic Conference Champion Norfolk State 8-5. Berini entered the game as a pinch-hitter to lead off the seventh inning and grounded out to the pitcher. It was ECU’s 11th comeback win of the season. Berini, the 2019 Big 8 Conference Player of the Year for Orange, has played in 13 games this season. East Carolina will travel to Nashville this weekend to face #4 Vanderbilt in a best-of-three Super Regional starting Friday.

Landon Riley: The Liberty Flames baseball team competed in the Knoxville Regional of the NCAA Tournament over the weekend. The Flames avenged two losses to Duke by beating the Blue Devils twice. On Friday, Liberty defeated the Blue Devils, who came into the tournament ranked #19, 11-6. On Sunday, in an elimination game, the Flames scored eight runs in the first inning to prevail 15-4. #2 Tennessee defeated Liberty 9-3 on Saturday, and 3-1 on Sunday at Lindsay Nelson Stadium in Knoxville, TN to advance to the Super Regional round. Riley played in Saturday’s loss to the Volunteers. He pitched to one batter, which led to a groundout. Liberty, the regular season champions of the Atlantic Sun Conference, finished with a record of 41-16. It was the second regional final in program history. The Flames finish the year with over 40 wins for the seventh time. Riley concludes the year with 19 pitching appearances, all in relief. He had a 2-0 record with a 4.00 ERA and five saves. Riley had 19 strikeouts and nine walks in 18 innings. He will be a senior next season.

Dante DeFranco: Two former Orange High teammates were on opposing sides on Saturday in the NCAA Tournament. As East Carolina faced off against second-seeded Charlotte, Berini suited up for the Pirates and Dante DeFranco was in uniform for the 49ers. DeFranco didn’t play in any games this weekend. The 49ers, ranked #20, opened with a 13-10 win over Maryland on Friday, but it was its final victory of the season. After the loss to ECU, Maryland edged Charlotte 2-1 on Sunday in an elimination game. Charlotte, the regular season champions of Conference USA, end the year 41-20. It hasn’t been publicly announced whether DeFranco, a freshman, will redshirt this year.