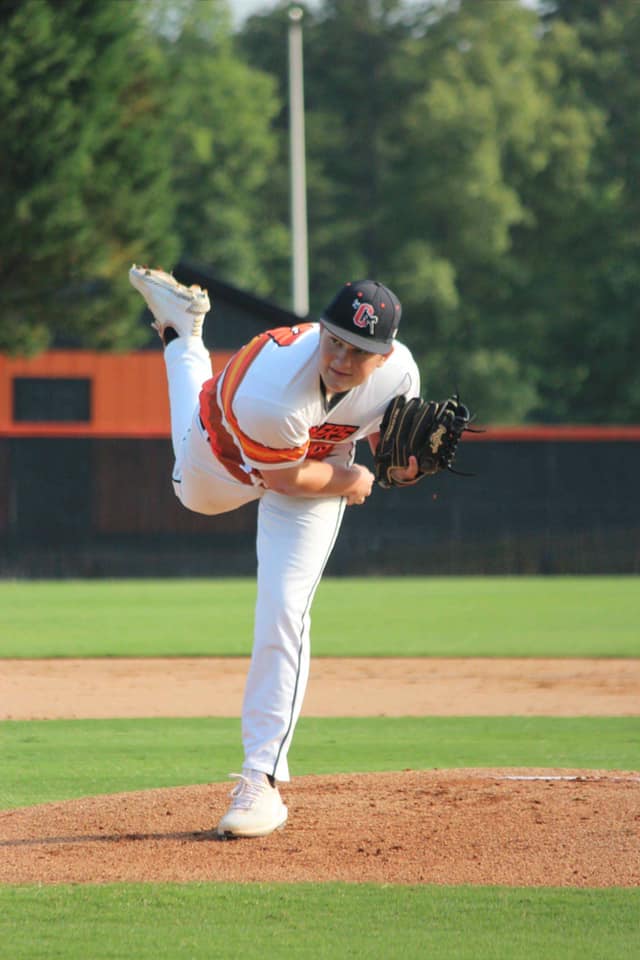 By his own admission, it was the best game Jordan Underwood has thrown in his life.

The fact that it happened in his final game on Orange High Field was poetic justice considering all that he’s had to overcome.

That includes more than just a pandemic, which took away most of his junior season in 2020, when he would have been Orange’s top starting pitcher. There have also been arm troubles that he’s still working his way back from. Even on Friday night against Chapel Hill, Underwood was on a pitch coach as mandated by Orange Coach Jason Knapp.

Despite that, Underwood needed just 44 pitches to complete five innings against the Tigers, tying the longest start of his career.

Underwood earned his second win of the season, while sophomore Joey Pounds picked up his second save as Orange (9-3) defeated Chapel Hill 3-2 in Hillsborough. It was the final game between the two longtime rivals as Big 8 Conference opponents. The Tigers will return to 4A in August.

“I’m proud of him,” said Orange Coach Jason Knapp said of Underwood. “He wanted the baseball. He’s come back from injury and has been itching to get back on the mound. I was tickled to be able to give him more than just a couple of innings. I felt like it was time to let him roll and he did a great job.”

The only other time in Underwood’s career that he completed five innings was his first varsity start against Hillside on March 22, 2019 in Durham.

It was another near miss for Chapel Hill (7-5), who have lost three one-run games this season.

Orange struck for two runs in the first inning. Jackson Berini, whose brother Joey played for East Carolina earlier in the day against Norfolk State in the NCAA Tournament, drew a leadoff walk. With one out, catcher Davis Horton extended his hitting streak to 13-games with a line drive to left field. As Berini reached third base safely, Horton raced for second, which drew an errant throw that rolled all the way to the centerfield fence. Horton scored easily.

“That was the longest I’ve run in a long time,” Horton said.

The 2-0 lead stood through four innings because of the Orange defense. Underwood only allowed three baserunners in five innings. Midway through the game, Underwood retired seven in a row until an error led to Will Epstein getting onboard to start the fifth inning. Panther right fielder David Waitt had a season-high five putouts, and second baseman Connor Funk had five assists.

Third baseman Ryan Hench led off the fourth inning with a solo blast to the porch in left field that straddled the line but stayed just to the right of the fair pole to push Orange’s lead to 3-0.

Trevor Liebe, who had Chapel Hill’s only two hits in the first matchup against Orange on May 11, blasted a two-run homer in the sixth off Pounds to reduce the Chapel Hill deficit to 3-2. Pounds, a sophomore, remained composed and smoothly retired the final five Tigers he faced. Senior Jaren Sikes made a big catch in centerfield on a tricky line drive to conclude the sixth. Pounds quickly set down Chapel Hill in order in the seventh for the win.

“He bailed us out down in Pittsboro the other night,” Knapp said about Pounds. “He’s thrown strikes and that’s the name of the game. It sounds simple but that’s what you have to do. We have the defense behind us and it usually plays good like they did tonight.”

Orange will travel to Northern Durham next Thursday before starting play in the 3A State Playoffs. The Knights handed the Panthers its only conference loss on May 18.