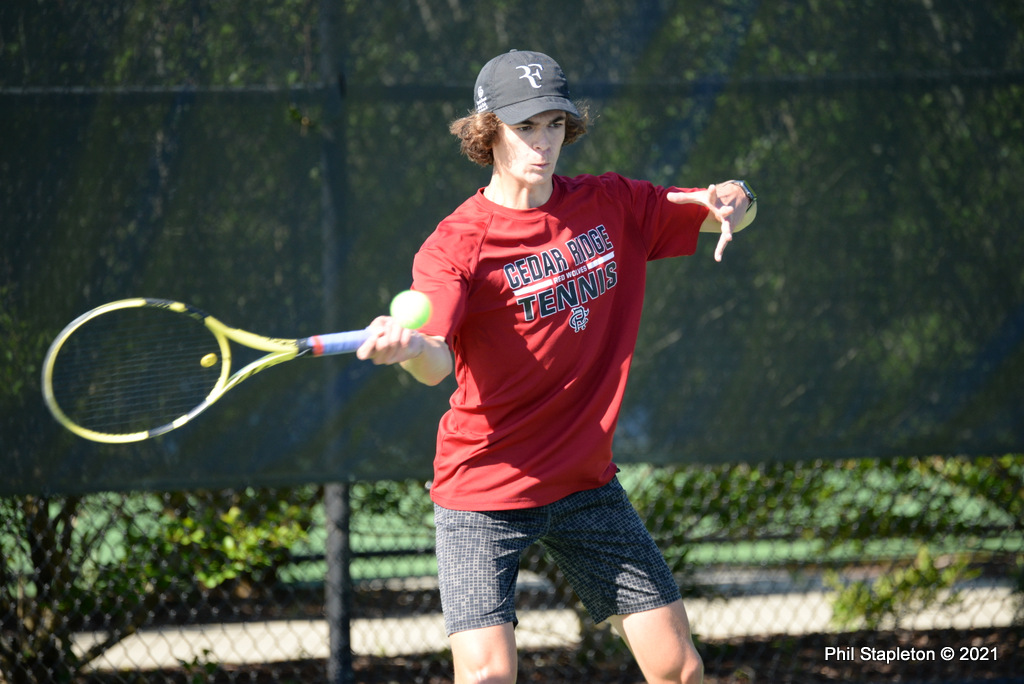 On May 15, Mayhew defeated Soham Pradhan of Marvin Ridge 6-2, 6-4 to reach the 3A State Tennis final at the Burlington Tennis Center. He became the first Cedar Ridge singles player to become a state finalist. The only other player from the Orange County School District to ever reach a state final was Britton Webb of Orange, who played for the 2A championship in 2005.

This was Mayhew’s first full varsity season. He went 14-4 in singles play. All four of his losses were to 3A State Champion Dennis Perumov of Chapel Hill, who naturally was also the Big 8 Conference Player of the Year. Mayhew finished second in the Mideast Regional, where he defeated Chapel Hill’s Eddy Ferreira 6-2, 6-2 in the semifinals. Mayhew qualified for the state championships on May 8 with wins over Western Alamance’s Will Geiger and East Chapel Hill’s Rama Varanasi in the opening rounds of the Mideast Regionals. He became the first singles player from Cedar Ridge to qualify for the state tournament since 2014.

Rachlin was the junior co-Captain of the team. He started all matches at #2 singles. Rachlin helped the Red Wolves sweep the season series from crosstown rival Orange. On March 22, Rachlin defeated Orange’s Colin O’Hagerty 6-2, 7-5. Throughout the season, Rachlin teamed with Lev Bearman on #2 doubles. Together, they defeated Northwood’s #2 doubles team 8-7, winning the tiebreaker 7-5 on March 15. It preserved a 5-4 Cedar Ridge victory.

Ballenger had 14 wins this season. He teamed with Mayhew to go 8-2 as the Red Wolves’ top doubles team. Ballenger also played #3 singles for much of the year, including a three-set victory over Carrboro’s Joseph Lee that ended 2-6, 7-5, 7-6 (12-10). It helped the Red Wolves defeat the Jaguars 9-0 at Carrboro Tennis Courts.

Orange’s Brandon Gwinn teamed with O’Hagerty to reach the 3A State Doubles Tournament. It was the first time since 2013 that Orange High was represented in a state tennis tournament. On May 8, Gwinn and O’Hagerty defeated Northern Guilford’s Duncan Moore and James Harrington 6-3, 6-4 to reach the 3A Mideast Regional semifinals. Earlier in the day, Gwinn and O’Hagerty knocked off Isai Gutierrez & Francisco Urieta of Harnett Central.

In his third year as a varsity player, Conover was usually Orange’s #1 singles player. He helped the Panthers to a winning season on the strength of two wins over Northwood. Conover defeated the Chargers’ Jio Sumogod 6-4, 6-4 on March 24. A month later, Conover defeated Sumogod 7-5, 6-4 as Orange defeated Northwood 5-4 in Hillsborough.

In addition to tennis, the Big 8 Conference has named its All-Conference teams for men’s golf. Orange’s Josh Frank and Cedar Ridge’s Bradley Monschein made All-Big 8.

Frank, a senior, had a nine-hold average for the year below 42. He qualified for the 3A Mideast Regionals at Keith Hills Golf Club on the campus of Campbell University. On April 13, Frank shot a 79 at Occoneechee Golf Course in Hillsborough, the home of Orange and Cedar Ridge golf.

Monschein was the Red Wolves’ top player throughout the season. In mid-March at Occoneechee Golf Course, Monschein led Cedar Ridge with an 87 over 18 holes, which was tied for fourth among competitors from five different schools. Somewhat remarkably, Monschein didn’t start getting serious about golf until about a year ago. This was his first season on the Cedar Ridge golf team. He’s currently playing for Cedar Ridge’s junior varsity baseball team.