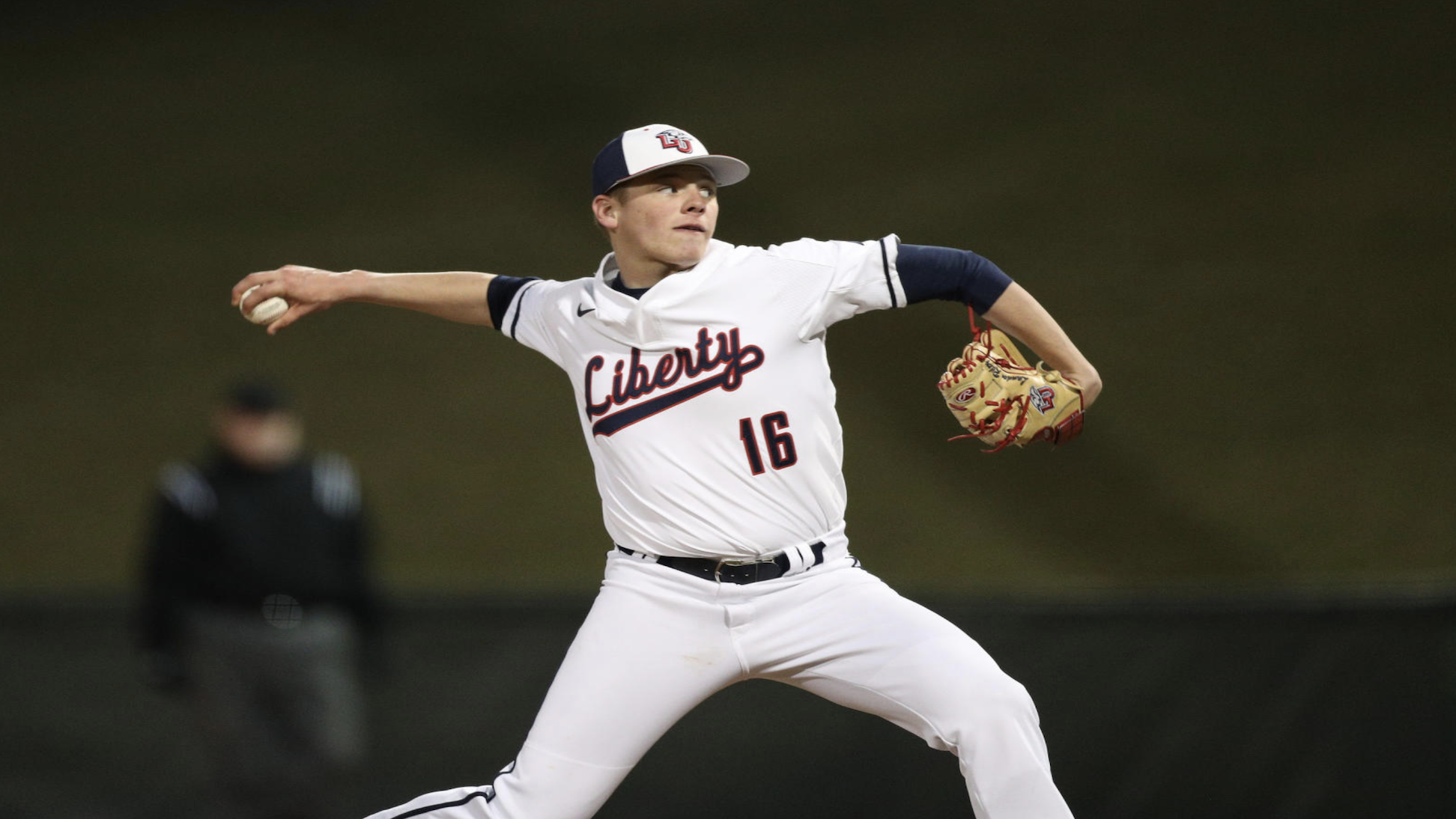 Landon Riley: The Liberty Flames were upset in the Atlantic Sun Tournament championship game by Jacksonville 7-3 on Saturday at Harmon Stadium in Jacksonville, Florida. Riley threw one inning of scoreless inning against the Dolphins with one walk and one strikeout. Liberty defeated North Florida 5-2 in Friday’s semifinal game. On Thursday, Jacksonville defeated the Flames 2-1, Liberty’s first loss in the tournament. On Friday morning, Liberty shut out Kennesaw State 6-0. The Flames now await for the NCAA Selection Show at noon on Memorial Day to learn if their season will continue. Projections from Baseball America and D1baseball.com both have Liberty receiving an at-large bid for the NCAA Tournament. The Flames have two wins over North Carolina, as well as victories over Virginia and Virginia Tech. Liberty, which won the Atlantic Sun regular season championship, are 39-14. In 18 pitching appearances this season, Riley had a 2-0 record with a 4.08 ERA and five saves. In 17-and-two-thirds innings, Riley had 19 strikeouts and nine walks.

Joey Berini: #11 East Carolina was eliminated by UCF on Saturday in the American Athletic Conference Tournament at BayCare Park in Clearwater, Florida. Berini entered the game as a pinch hitter for the Pirates in the eighth inning and hit a two-out single to centerfield. It was Berini’s third hit of the season. Berini also played Wednesday at East Carolina defeated Cincinnati 13-9 in an elimination game. He went 0-for-1 as a pinch hitter. East Carolina is 41-15 and will wind up with a spot in the NCAA Tournament when the field is announced later today. Berini has played in eleven games this year.

Brandon Andrews: The Jacksonville State baseball team ended the year with consecutive wins over Eastern Illinois. It was not enough for the Gamecocks to qualify for the Ohio Valley Conference Tournament. They finished 26-27, 10-14 in the Ohio Valley Conference. Andrews pitched in one game for Jacksonville State after he transferred from Nicholls State. He has one season of eligibility remaining.

Bryse Wilson: After his win over the Toronto Blue Jays last Friday, Bryse Wilson was optioned back to the Gwinnett Stripers of Triple-A East. On Friday night, Wilson earned the win as the Stripers defeated the Memphis Redbirds 8-2 in a rain-shortened six innings. It was the first complete game by a Gwinnett starter this year. He struck out five over six innings and surrendered only two runs. He also had a bunt hit in the third inning and scored off a home run by Jason Kipnis. In his last nine starts with the Stipers, Wilson is 8-0 with a 1.58 ERA dating back to July 21, 2019.

Marvin Jones: Jones competed for North Carolina Central at the NCAA Division I Outdoor Track and Field East Regional Preliminary Championships at the University of North Florida in Jacksonville, FL. Jones finished tied for 37th place in the high jump with a 2.06-meter leap. During his senior season, Jones had five top-5 finishes with three wins. He won the gold medal at the Mid-Eastern Athletic Conference Outdoor Track & Field Championships.

Olivia Ward: The former Cedar Ridge women’s tennis player ended the year on a strong note for Division III Methodist. On April 25, Ward defeated Chandler Brice of North Carolina Wesleyan 6-4, 7-6 (7-5) in the opening round of the USA South Women’s Tennis Tournament. North Carolina Wesleyan won the match 6-3 at the Slick Family Tennis Center in Rocky Mount. Ward ended the year with wins in six consecutive matches. Methodist end the year 8-14, but finished 2nd in the USA South Conference with a 5-1 record.

Brad Debo: Though he didn’t play for N.C. State this season, Debo was still honored during the Wolfpack’s home game against Florida State on May 22 at Doak Field in Raleigh. Debo didn’t have a senior day game during his senior year in 2020 because of the COVID-19 pandemic. Debo played in eight games in 2020 for the Wolfpack as a catcher and designated hitter. He hit .263 with one double. For his Wolfpack career, Debo hit .284 with nine home runs and 96 RBIs. He has started work as an organizational instructor for catchers at North Carolina Development Baseball out of Durham.