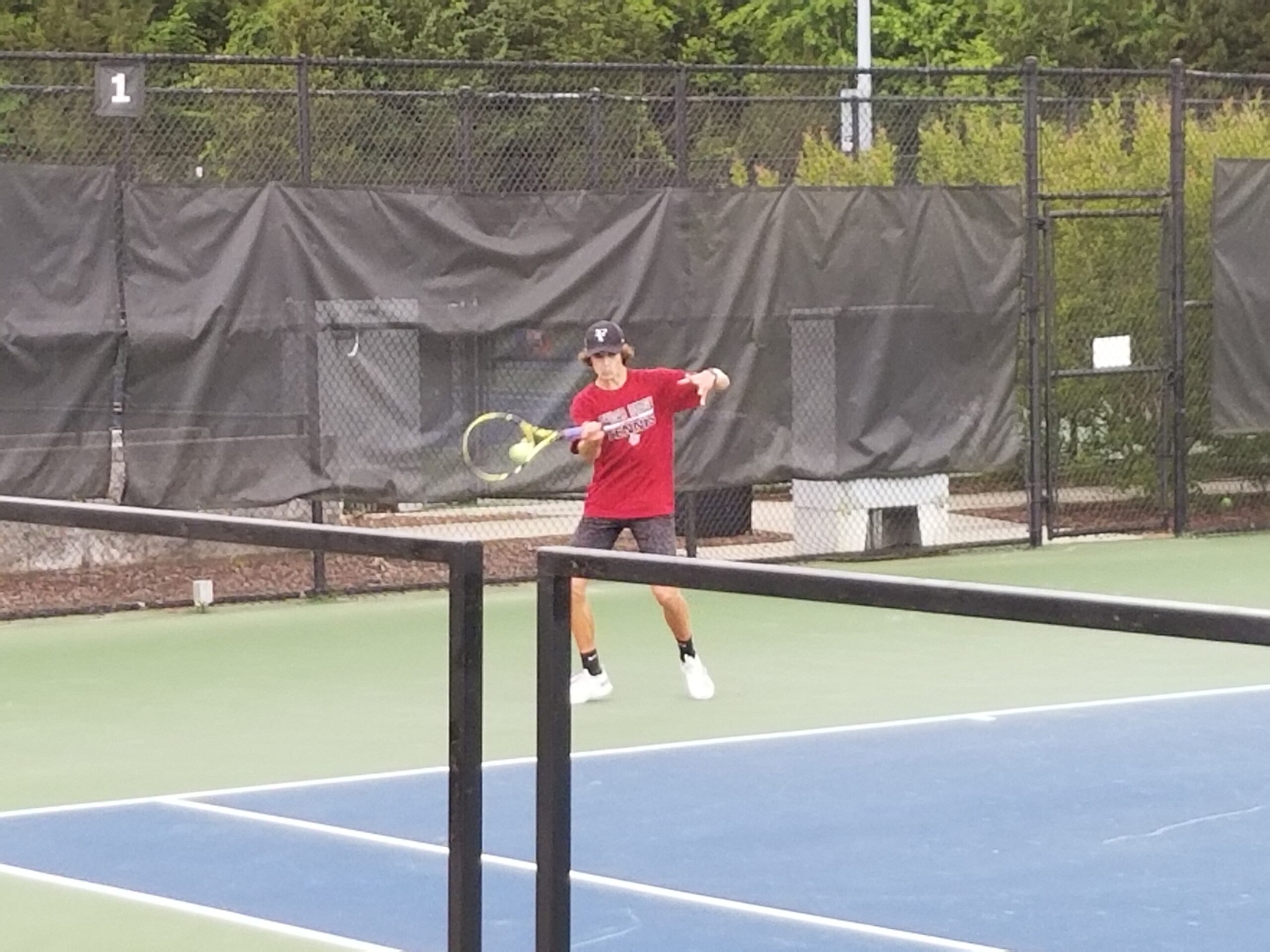 After a long day of school, why does someone stay after a two-hour practice to work on their serve for another 90 minutes? So that they accomplish things that no one has done before.

Only a sophomore, that’s what Cedar Ridge sophomore Josh Mayhew has done. He has become the first Red Wolf to advance to the semifinals of the 3A State Men’s Tennis Semifinals.

On Friday, Mayhew defeated Nicholas Clementi of Charlotte Catholic 6-3, 6-1 in the opening round of the 3A State Tennis Tournament at the Burlington Tennis Center. That win alone put Mayhew in a class by himself. He became the first tennis player from Hillsborough to win a match in the 3A State Tournament since 2012, at least.

Then Mayhew really outdid himself. He defeated Clayton’s Ben Jones 7-5, 7-5 to reach the semifinals. On Saturday morning, Mayhew will face Soham Pradhan of Marvin Ridge for a spot in the championship match.

The only player from Hillsborough to ever reach a state tennis championship match was Orange’s Britton Webb in 2005. Will Rollinson of Cardinal Gibbons defeated Webb 6-2, 2-6, 6-3 in the 2A Final.

Representatives from the Big 8 Conference comprise half of the 3A State Semifinals. Chapel Hill’s Dennis Perumov will take on Western Guilford’s Josh Gillis in the other semifinal on Saturday morning.

The victory continues a whirlwind week for Mayhew, which started last Saturday. After the 3A Mideast Regional was delayed a day by rain, Mayhew became the first Cedar Ridge player since Zac Mayhew in 2014 to reach the 3A State Tournament. Mayhew defeated Western Alamance’s Will Geiger 6-0, 6-2 in the opening round of the regionals in Burlington, then punched his ticket to the state championships with a 6-0, 6-0 win over East Chapel Hill’s Rama Varanasi.

Rain delayed the regional finals to Tuesday, but Mayhew defeated Chapel Hill’s Eddy Ferreira 6-2, 6-2 to reach the championship match. Perumov, the only player to beat Mayhew this year, won the regional championship 6-2, 6-2.

Mayhew’s run was part of a noteworthy day for Hillsborough tennis. Earlier, the doubles team of Colin O’Hagerty and Brandon Gwinn became the first representatives from Orange High in the 3A State Tennis Tournament since 2013, at least. In the opening round, Rish Reddy and Harrison Williams of Marvin Ridge defeated Gwinn and O’Hagerty 6-2, 6-1.

Mayhew, in his first varsity season, is 13-2 in singles play. He helped Cedar Ridge to a 9-4 overall record this season.

“Josh played two outstanding opponents who made you earn every point,” Steve Mayhew said. “Toward the end of the second match against Ben, Josh started cramping in his legs but persevered to win.”

Mayhew has strengthen himself with out-of-state tournaments during the summer in South Carolina and Georgia. While the pandemic ruined any chances of developing at Cedar Ridge during his freshman year, he still worked out with his coach at various facilities around UNC, even though many of the tennis clubs were shut down.

At night, Mayhew’s family gathers at Cedar Ridge tennis courts for games of pickle ball and doubles games. Now, Mayhew is on the cusp of something no Red Wolf has ever done before: play in a state tennis championship match.

“I think all the tournaments that Josh has played in the past helped him be ready both mentally and physically for regionals and today,” Mayhew said. “As his coach I am very proud of Josh but as his Dad, I am extremely happy for him because I know all the hours and sacrifice that he puts into tennis. To see all the hard work pay off is very nice. I like the fact that he is not satisfied and is ready to compete tomorrow.”