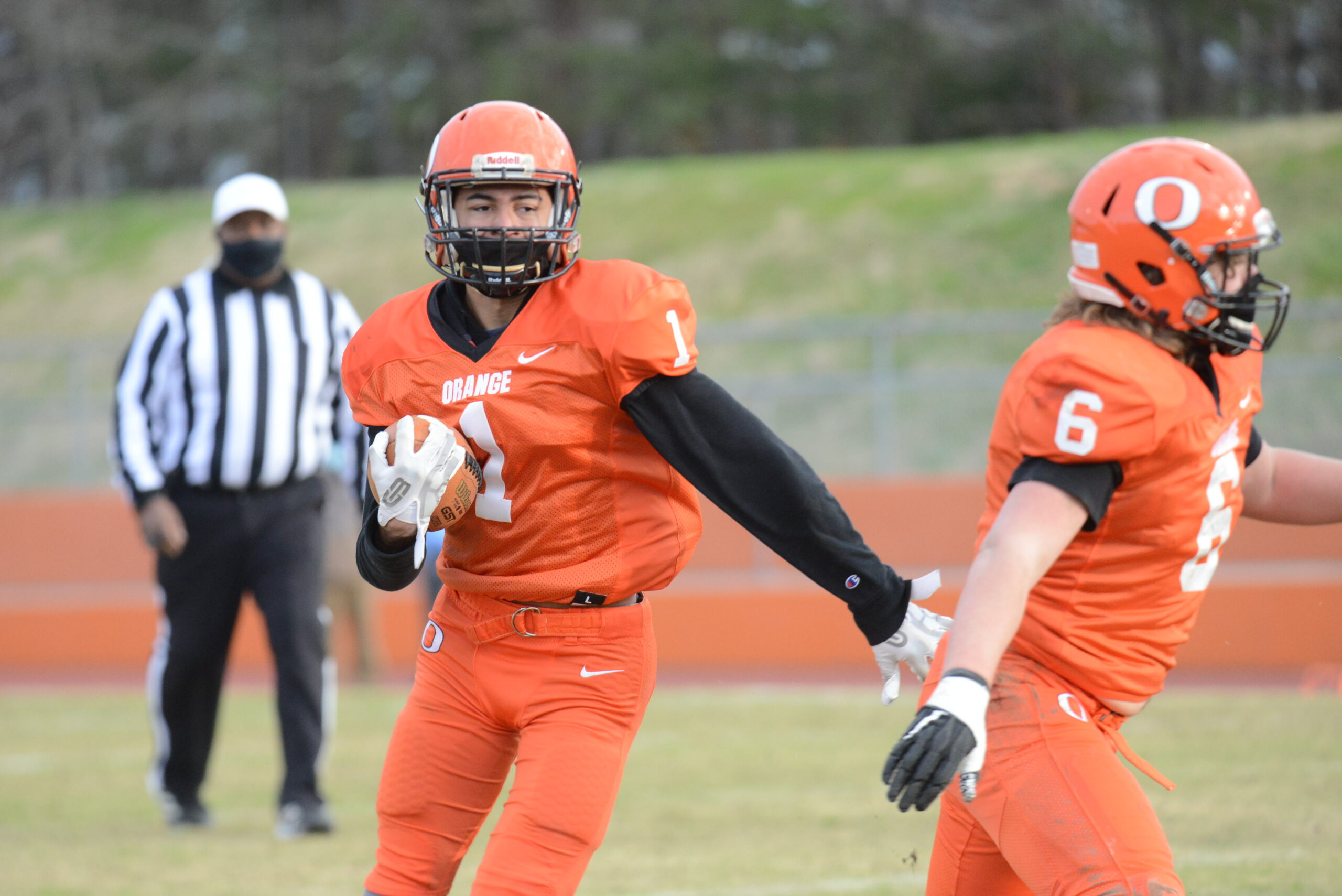 Just weeks after ending the season with a classic game against Chapel Hill at Culton-Peerman Stadium, six Orange Panthers have been named to the All-Big 8 Conference squad for the 2021 season.

During a six-game regular season shortened by the COVID-19 pandemic, the Panthers finished 3-3. The record can’t begin to tell the tale of a team that had to reinvent itself offensively after the opening week of the season and was competitive with the Big 8’s best teams. It’s possible that Orange was two kicks away from making the state playoffs.

The Panthers opened the year with a 20-0 loss to Southern Durham at Auman Stadium. In the ensuing week, quarterback Nigel Slanker left the team and transferred to Cedar Ridge, where he practiced but never played. Hodges became Orange’s starting quarterback and engineered a team that relied almost exclusively on the run for the remainder of the season.

After a crash course in the double wing the following week in practice, Hodges led Orange’s offense in a 7-6 upset of Northern Durham at Durham County Stadium. Woods scored the Panthers’ only touchdown early in the second quarter. He finished with 43 yards from scrimmage and five tackles. In addition to playing quarterback, Hodges started at linebacker, where he had six tackles, including two for a loss.

For the season, Hodges had 19 tackles and four tackles for loss. He also had an interception late in the first half against Vance County that set up a touchdown as the Panthers came from behind to beat the Vipers 22-8 on March 20.

Brooks, a senior, got better as the year went on in the new offense. In his final game at Orange, Brooks ran for a career-best 128 yards, his first-ever 100 yard games at the varsity level. Brooks scored a 2-point conversion with 24 seconds remaining to put the Panthers ahead of the Tigers 22-21. He led the Panthers with 309 rushing yards and five touchdowns. Against Vance County, Brooks scored three touchdowns. He also started at cornerback after starters Zahmir Watkins and Daniel Champion suffered injuries against Southern Durham.

With the greater reliance on an old-fashioned running game, Horne anchored the offensive line from his right tackle position. After a fumble-prone Orange offense was held to a measly 50 yards against Southern Durham, the Panthers had 151 yards the following week against a solid Northern Durham defense. Orange’s offense largely improved from that point forward. Horne and co-horts Brendon Worsham, Jaylen Partin, Jose Guzman and Dari’us Matkins helped the offense register 250 yards against Vance County, 270 yards against Cedar Ridge and a season-best 373 yards against Chapel Hill.

Torres started on offense and defense in several games. He rushed for 218 yards and scored one rushing touchdown against Cedar Ridge (his first came in the 2019 season opener against R.J. Reynolds). Torres had an interception against Northwood on the Chargers’ opening drive in their matchup on March 26 in Pittsboro.

In his first year as starting punter, Satterfield averaged 27.4 yard per punt. His longest punt was 53 yards and two of his kicks were downed inside the 20-yard line. Satterfield showed so much promise in his first season that, last week, he was invited to the Kicking World Kicking Camps National Showcase in Austin, Texas on December 4-5.

Making honorable mention All-Big 8 Conference from Orange was fullback/linebacker Jackson Wood, Trey Grizzle and Elijah Danley. Wood scored Orange’s last touchdown on the season against Chapel Hill. He also led the team with ten tackles for loss. Danley, a junior, had three interceptions on the season. Grizzle caught a touchdown pass in his final game for Orange agains the Tigers. He registered 19 tackles and six tackles for loss.

Orange was also honored with the sportsmanship award from the Big 8 Conference.