Green Eggs and Hamlin: Hillsborough softball was a nonstop thrill ride this spring 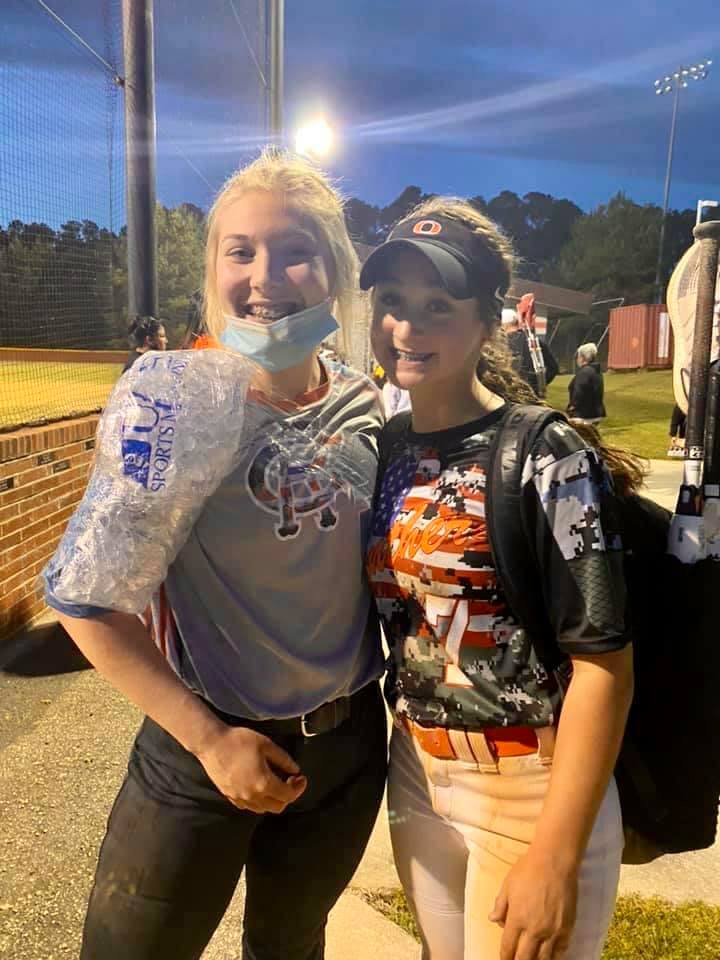 Savannah Wynne broke her nose in the first inning of Orange’s playoff game on Monday night. She wanted to stay in anyway.

A passing thunderstorm that cut through Hillsborough hours before the first pitch between the Lady Panthers and Southwestern Randolph had created a bumpy outfield, despite the best efforts of Orange softball’s coaching staff that worked on the field right up past game time. Randolph’s Alley Lowe lined a 3-2 fastball through to the outfield, which took a sudden, violent hop off the grass and into Wynne’s face.

Immediately, blood started coming out of her nose, which was covered with a towel by Orange trainer Emily Gaddy right away. It was only after lobbying from Gaddy that Wynne agreed to be replaced by freshman Delaney Shaffer. But she told Gaddy “I’m going back in.”

And she did. In the fifth inning, Wynne was back in left field. Most players who return from injury in the middle of the game aren’t effective. Wynne, however, lined a double to right field to drive in Emma Puckett to continue building an Orange rally after Southwestern Randolph jumped ahead 6-0. The Cougars would hold on to win 7-5.

Afterwards, Wynne’s mother drove her to UNC Primary Care, where she walked in still wearing her uniform. Doctors had to glue the top of her nasal cavity back together. But she had to go back in the game because, well, as her mother says, “softball is in her heart.”

Chances are several Cedar Ridge players would have done the same thing.

In its final year in the Big 8 Conference, Orange rolled to the league title. They scored at least eleven runs in every game. Only one team came within nine runs of beating the Lady Panthers during the regular season.

Naturally, that team was Cedar Ridge. On April 15, it appeared Orange won on its way to its eighth straight win in dominant fashion. They led 9-2 going into the bottom of the seventh behind three runs scored by Carson Bradsher and two more from Serenity McPherson.

Then Cedar Ridge came up with a rally for the ages. They scored seven runs in the bottom of the seventh inning. For context, Orange had not surrendered four runs in a game yet, and they still didn’t until this past Monday night.

Cedar Ridge would have won if it wasn’t for the defensive reliability of Mary Moss Wirt, normally a second baseman who played third against the Red Wolves because Puckett was out of the lineup. Forgotten in the avalanche of runs that Cedar Ridge scored in the seventh was Wirt making the final out on a short grounder hit by Emma-Rae Sharp. Wirt, two steps in front of third base, fired to catcher Lauren Jackson, who retired Marlee Rakouskas.

The talk after the game among Cedar Ridge coaches, among other subjects, was “What if we played in a smaller ballpark?” For a brief moment, Red Wolf shortstop Ava Lowry appeared to win the game for Cedar Ridge with a long fly ball to lead off the bottom of the eighth inning. The only problem was she hit it to right center, which extends to 227 feet–the longest part of the stadium. The ball landed two feet shy of the wall and Lowry settled for a triple. Carson Bradsher made the final out of the inning to extend the game into the ninth, which led to another reminder of how bright the future of Hillsborough softball truly is.

Shaffer, a freshman who made just her second start, had the game-winning hit when she drove in Wirt in the ninth inning. Shaffer finished 4-for-5 with 3 RBIs. After her heroics at the plate, Shaffer made the game’s biggest defensive play in the bottom of the ninth when she caught a sinking popup off the bat of Alexandria Matthews at second base, then threw to first for a double play.

Years ago, Cedar Ridge 2nd baseman Tori Dalehite and Orange 1st baseman Jaden Hurdle started a tradition where they would pose together for a picture after every game they played against each other, regardless of who won. In 2017, Orange dominated the Red Wolves en route to the 3A State Title. In 2018, Cedar Ridge swept Orange on its way to the first softball conference championship in school history. Each time, the following morning, Dalehite and Hurdle would be on their mother’s Facebook feed, smiling with softballs in their hands and their arms around each other.

For King, it’s been a tough 2021. In January, she lost her grandmother to COVID-19. Sherry Carter never missed any of Haley’s games. Not during the sweltering heat of summer travel ball, which usually included a new town every weekend. Not during the early games of a regular, non-pandemic season when the spectators are often bundled up amidst blustery weather like they’re at Lambeau Field, except it’s a softball diamond.

Against Orange, Haley’s grandfather brought along a t-shirt that Sherry wore to many of Haley’s games. Hayley kept that in her back pocket during games for the rest of the season. She rubbed it whenever she needed inspiration.

As the Cedar Ridge seniors gathered together on Friday night after its doubleheader sweep of Southern Durham, ShiLi Quade, Rakouskas, Matthews, Sharp, Reagan Ruhl, and Lajoan Stuart hoped that wouldn’t be the end. The Red Wolves ended the season with four straight wins, but the following day their hopes of a state playoff spot was dashed.

Cedar Ridge Coach Allen Byrd didn’t want to talk like it was the end on Friday night, but started to reflect on a group that help bring two Big 8 Conference championships and a 50-11 record since 2017 to the program.

“Those six kids devoted their lives to this program,” Byrd said. “They helped build this program. We played a little down this year. We’ve lost a lot over the last few years but they never gave up. It’s said it ended for them.”

The future is bright for both programs. Next season, Cedar Ridge third baseman Takia Nichols will be a senior, but her name is firmly embedded in the Red Wolf record books for generations to come. She’s already the all-time home run hitter, softball or baseball, in school history with 26 dingers after 42 career games. Her teammate, shortstop Ava Lowry, has already committed to play at North Carolina Wesleyan and will also return.

Orange only loses two seniors in first baseman Gracie Colley and third baseman Emma Puckett. Of Orange’s ten starters on Monday night, half of them were either freshmen or sophomores.

Combined with the fact that Orange, Cedar Ridge and Northwood will join a new league that includes defending 3A State Champion Eastern Alamance, powerful Western Alamance and longtime contender Person, 2022 may make this spring’s thrill ride look like a merry-go-round.