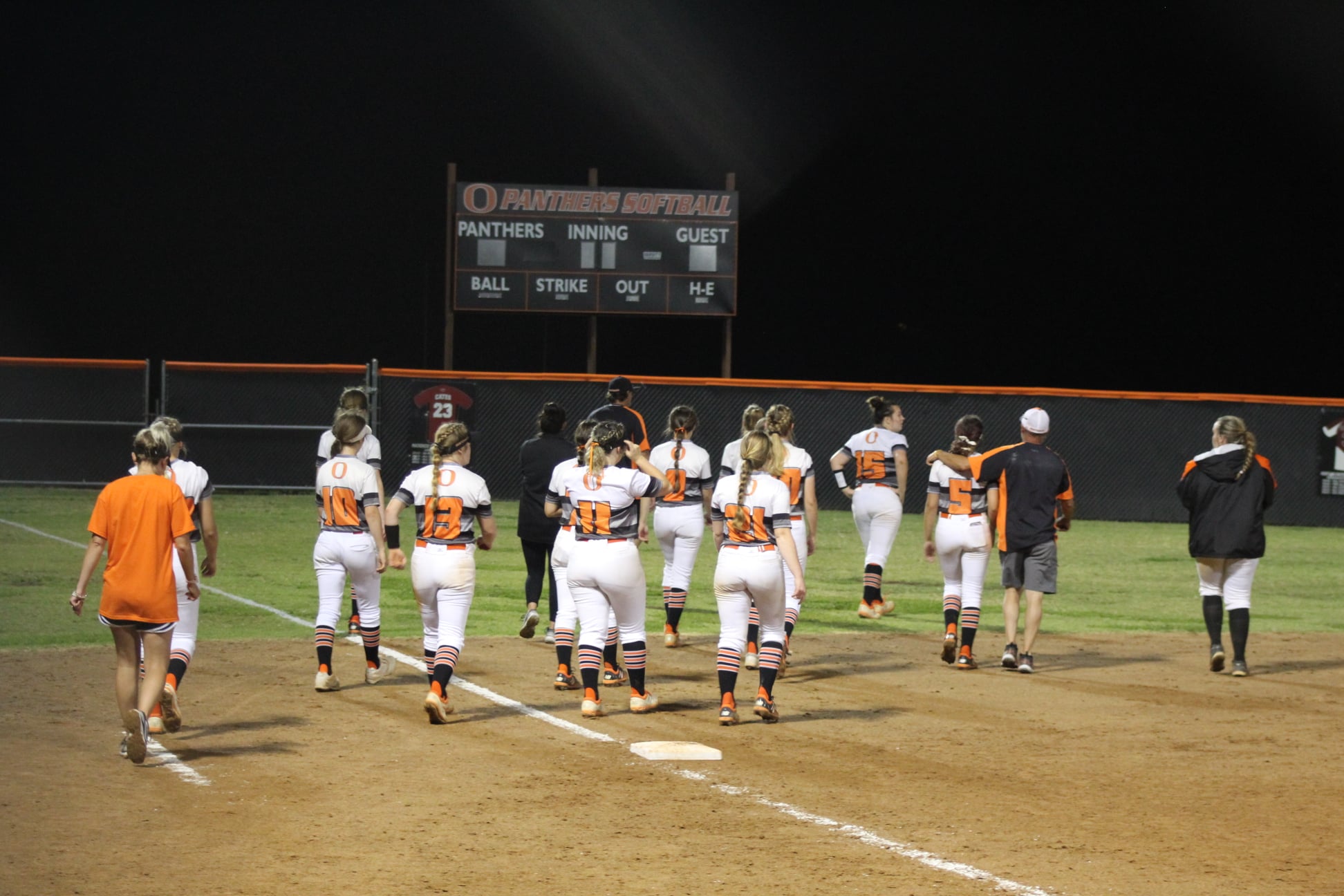 When you’re used to winning, the end of the season feels sudden.

For Orange softball, losing in the first round of the 3A State Playoffs was one thing. How it happened was another.

For a fleeting moment in the 7th inning, it appeared Panther designated player Kelsey Tackett would bring the tying run to bat with a sharply hit line drive to right field. It would have been her second hit of the game.

Southwestern Randolph second baseman Carleigh Whitson, with the reflexes of a cat, stood in the way.

Well, dove in the way.

With her body parallel to the ground, Whitson lunged on a diving catch for the final out. In an instant, Orange’s 12-game winning streak was over. So was its season.

Whitson’s defensive gem was an appropriate finale. The Lady Panthers romped through the Big 8 Conference by forcing opposing defenses into mistakes and racked up one unearned run after another until they captured the league championship.

The message that Orange sent to opposing teams was “prove you can play defense on us.” It worked until Monday night, when Southwestern Randolph showed it was the best defensive team the Lady Panthers had faced.

The Cougars (9-4) defeated Orange 7-5 at Orange Softball Field in the opening round of the 3A State Playoffs. Southwestern Randolph, who tied Southern Alamance for the Mid-Piedmont Conference championship, will travel to Clayton for the second round on Wednesday night.

Orange ends the season 12-1 after winning the Big 8 Championship outright. It was the first time all year that the Lady Panthers were held below eleven runs in a game.

Orange pitcher Gracie Walker, who injured her quad while running to first on a single in the 6th inning against Northern Durham last Thursday, was pulled in the second inning after she surrendered four runs on three hits and two walks. Freshman Caden Robinson pitched the rest of the way. In five-and-two-thirds innings, she conceded five hits and three runs, with six strikeouts.

“I don’t know if we were tight to begin the game,” Orange Coach Johnny Barefoot said. “We knew what we had to do. We might have thought it was do or die early. But they settled down and I’m very proud of them.”

Southwestern Randolph struck for two runs in the first inning. Leadoff batter Alex Coleman, who came into the game hitting .733, walked. After Haley Epps moved her over on a sacrifice bunt, Walker struck out Molly Strider. Cougar catcher Gracie Ward stroked a single to centerfield to bring in Coleman.

Right fielder Ally Lowe lined a single to left that took a sharp bounce off the ground and struck left fielder Savannah Wynne in the face. The hit scored courtesy runner Lileigh Payne. Wynne suffered a broken nose and left the game–for two innings. She was taken to the hospital later, but remarkably finished the game.

In its first at-bat, Orange put Southwest Randolph to the test right away. Serenity McPherson lined the first pitch she saw off the leg of freshman Cougar pitcher Lindsey Beck, who remained in the game. Shortstop Carson Bradsher reached on an infield hit. Normally, McPherson and Bradsher each getting on board to start an inning is a recipe for disaster against opposing teams. Instead, the Cougars emerged unscathed when catcher Lauren Jackson grounded out to Strider at third base, then first baseman Lindsi Brown threw to Ward to tag out McPherson at the plate for the final out.

Centerfielder Caressa King walked to lead off the 2nd inning. After Beck delivered another sacrifice bunt, Brown lined a hard single off Emma Puckett’s leg at third base to score King. Robinson replaced Walker as pitcher, but Coleman drilled a double to the right field gap to plate Brown and increase Southwestern Randolph’s lead to 4-0.

Orange freshman Delaney Shaffer led off the third inning with a solid bunt to third. Against most teams in the Big 8 Conference, it would have been a much-needed leadoff hit. Against the Cougars, it was bare-handed by Strider, who fired to first for an out.

As the Lady Panthers’ offense struggled to get on track, the Cougars relied on the longball to pad its lead. King led off the fourth inning with a solo blast to centerfield. In the fifth, Strider stroked a first-pitch fastball over the centerfield wall to push the SWRHS advantage to 6-0.

Jackson put a long-awaited jolt into the Orange offense with a double to the right-centerfield wall to lead off the sixth inning Mary Moss Wirt lined a two-run homer over the left field wall, nearly hitting the scoreboard, for Orange’s first runs. But it wasn’t over.

Puckett sent a squibber off the end of her bat barely five feet from the plate for a single. Wynne, with a yet-to-be diagnosed broken nose, reentered the game and stroked a double to right field which scored Puckett. Walker, who moved to right field after being replaced as pitcher, lined a fastball to right field that was nearly caught by Ally Lowe. Puckett scored to cut the Cougar lead to 6-4.

This was the dream scenario for an Orange comeback. Walker at second with one out and the tying run at the plate. But Beck struck out McPherson, then Bradsher flew out to left field when Coleman made the catch despite the wind nearly blowing it over her head.

Coleman scored Southwestern Randolph’s final run. She reached off a perfect bunt right that inched down the third base line. She stole second and went to third after Epps reached on an error. Strider grounded out to Bradsher, which brought Coleman in.

Trailing 7-4, Orange got hope from Jackson, who lined a solo homer to left field. Jackson ended the year with four home runs in her final four games.

As Orange’s season ended, its stint in the Big 8 Conference is also over. They will move into a whole new world in a yet-to-be-named league that’s so full of softball powerhouses, the NCHSAA should just call it the Southeastern Conference Northern Division and be done with it.

There’s defending 3A State Champion Eastern Alamance. Perennial power Western Alamance. And familiar face Person, who hasn’t been a conference rival to Orange in over 20 years. That will change in August.

Monday’s battle featured teams that were mirror images of each other. Orange loses two seniors, Emma Puckett and Gracie Colley. The Cougars will lose just three. Both teams had freshman pitchers the vast majority of the game.

As Orange ventures into a new conference with stiffer competition, Barefoot isn’t about to forget his memorable first year at Orange that made history, even if the end came too soon.

“They battled,” Barefoot said. “Most teams when they were down 6-0 would have just hung their head. I told them the only difference between winning and losing is those that give up. They come to life and they played hard. I’m proud of them.”