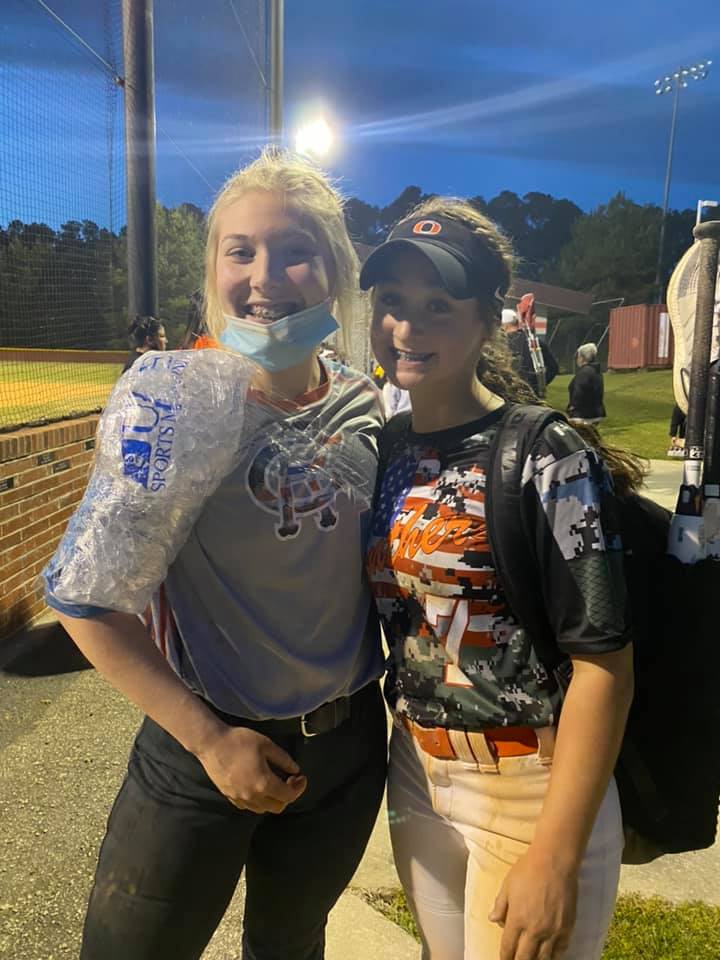 As the sun started to set on a remarkable day in Hillsborough, it appeared for just a moment that Ava Lowry would make it a celebration unlike any other for Cedar Ridge.

In any other ballpark across the Big 8 Conference, it would have been. Lowry had worked the count as only she could, and sent Orange pitcher Caden Robinson’s payoff pitch towards right centerfield. As Orange’s Serenity McPherson gave chase, the only drawback for Cedar Ridge was that Lowry had hit it to the deepest part of a big ballpark.

It landed two feet shy of the wall.

Lowry would wind up with a triple in the eighth inning, but she would go no further. The most remarkable comeback win in Cedar Ridge softball history, and possibly every other sport as well, would fall just short.

Orange scored three runs in the ninth inning to escape from Cedar Ridge with a 12-9 win in extra innings. Freshman 2nd baseman Delaney Shaffer, in just her second start, went 4-for-5 with two RBIs, including the game-winning hit when she drove in junior Mary Moss Wirt with a drive to left field. Wirt led off the ninth with a liner up the middle on an 0-2 pitch.

Not that anyone in attendance, bundled up on a chilly night wearing orange or burgundy and gray, thought it would remotely reach that point to begin with. Cedar Ridge trailed 9-2 going into the bottom of the seventh inning against an undefeated Orange team that had already clinched the Big 8 Championship on Tuesday with a victory over Vance County.

Besides, some Cedar Ridge fans felt that they had already sewed up a moral victory. They were the first team this year to extend Orange past the fifth inning. The Lady Panthers (8-0, 6-0 in the Big 8) had won all of its games via the run-rule, i.e. 10 runs after five innings, or 15 runs after three. On March 23, Orange beat Cedar Ridge 20-0. Their closest game had come against Vance County on Tuesday, an 11-1 win that was stopped in the fifth after Carson Bradsher drove home Delaney Shaffer.

With Cedar Ridge trailing 9-2 going into the seventh, it appeared another Orange win would be a mere formality.

“I’ve never seen anything like it,” said Cedar Ridge Coach Allen Byrd. “We come out of this game with our heads held high. What amazed me is that they never gave up. We were down seven runs, and they knew that wasn’t the time to give up. It was time to fight.”

Pinch hitter Tori Carden, in her second plate appearance of the year, drew a walk. Alex Matthews singled to centerfield. Takia Nichols walked to load the bases, which led Orange coach Johnny Barefoot to put in freshman right fielder Caden Robinson to pitch. Robinson struck out Emma-Rae Sharp, but Carden scored off a wild pitch. Senior catcher ShiLi Quade laid down a bunt to third and reached safely to load the bases again. Olivia Aitkin lined a single to centerfield to bring in Nichols and Matthews to make it 9-5.

With Lowry at bat, Quade scored off a wild pitch. Then Lowry reached on a dropped ball in the outfield, which allowed Aitkin to come in. Second baseman Reagan Ruhl grounded a ball to Shaffer, who flipped to second base, but no one was covering. Senior Marleee Rakouskas got an infield hit on a slow roller to shortstop to load the bases again.

Carden, the tenth batter for Cedar Ridge in the 7th, came up. On a 1-1 pitch, Lowry scored off a wild pitch and moved Ruhl to third. After Carden drew another walk, Matthews grounded out to Carson Bradsher at short, which allows Ruhl to tie the game. Rakouskas, incredibly representing the game-winning run, moved to third.

After Nichols was intentionally walked, Sharp grounded to Wirt at third base, who came up with the ball and chucked it to catcher Lauren Jackson to retire Rakouskas at the plate on a force out. A game that appeared to be a breeze for Orange was now going to extra innings.

After Lowry’s near miss in the 8th, Wirt led off the ninth inning with a single. Following the RBI by Shaffer, centerfielder Serenity McPherson laced a 2-1 liner to left field to score Shaffer. Bradsher drilled a fastball to left field, which brought in Gracie Colley for insurance, but McPherson was tagged out at the plate.

Shaffer, in just her second varsity start at second base, made the game’s biggest defensive play in the bottom of the ninth inning. After Rakouskas and Carden hit consecutive singles to lead off the frame, Matthews lofted a soft liner to second. With the ball fading quickly, Shaffer dove under it to make the catch, then doubled up Carden at first. After Nichols was intentionally walked to a chorus of boos from the Cedar Ridge fans, Wirt fittingly got the final out on a grounder hit by Sharp.

Lowry, who finished 2-for-4 with a triple and a double, was responsible for ten outs (four putouts and six assists) at shortstop. Rakouskas went 3-for-4.

Orange opened with three runs in the first inning. McPherson hit a leadoff single to centerfield, and Bradsher followed with an RBI triple to left field. Robinson wound up at third a dropped ball in left field to score Bradsher. With Jackson at bat, Robinson scored off a wild pitch.

McPherson scored again in the second inning after she got onboard off a single to shallow centerfield. Bradsher reached on an error, then got caught in a rundown after McPherson went to third. As Bradsher baited a throw, McPherson raced across the plate safely

It was one of seven unearned runs scored by Orange.

Cedar Ridge scored in the second inning after Lowry doubled to left field. After going to third on a groundout by Ruhl, Lowry touched the plate after a wild pitch to cut Orange’s lead to 4-1.

Jackson reached on an error to start the third inning. With Brianne Foster running for Jackson, Wirt singled up the middle. Pitcher Gracie Walker knocked in Foster with an groundout to Lowry. Shaffer singled in Wirt with a base hit to right field.

In the 80s, a walk followed by two stolen bases was known as the “Ricky Henderson triple.” Well, Bradsher increased Orange’s lead in the fourth with a Carson Bradsher home run to increase Orange’s lead to 6-1 during a sequence where she reached on a single, stole second and wound up at home after two throwing errors.

In the sixth, Brasher notched her third run of the game following another error. After Robinson moved her to second base on a groundout, Jackson lined a fastball to left field for a RBI double. At the time, it felt like an extraneous run, but it proved to be vital a short time later after Cedar Ridge scored seven runs in a 7th inning no one will soon forget.