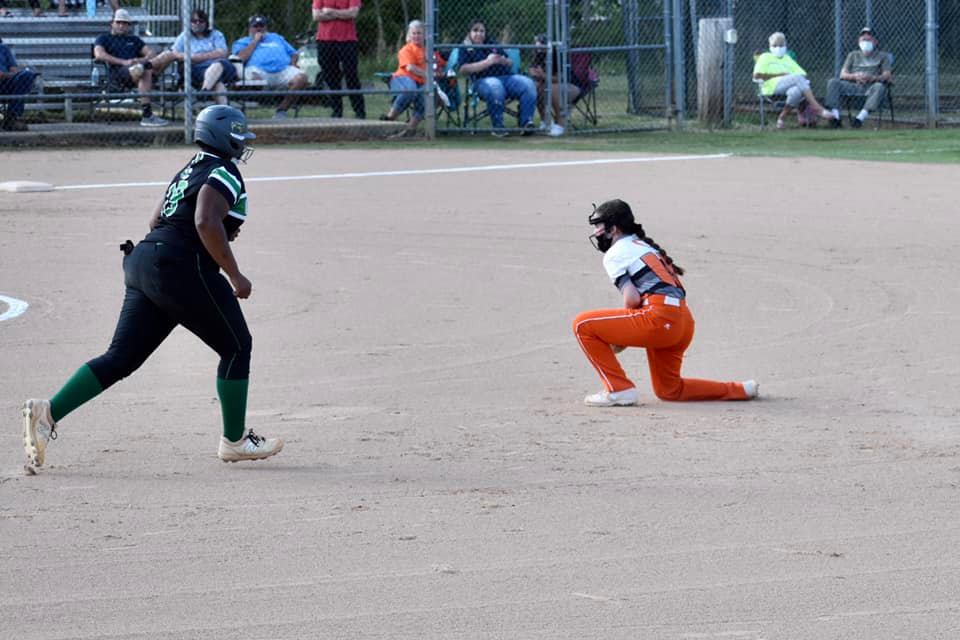 The Orange softball team has won the Big 8 Championship and it wasn’t close.

On Tuesday, the Lady Panthers rolled past Vance County 11-1 in five innings in Hillsborough to officially clinch the title.

But that’s only part of the story.

Among the ten players on Orange Coach Johnny Barefoot’s lineup card on Tuesday, there were two freshmen, four sophomores, and three juniors. The only senior was first baseman Gracie Colley, who was at first base and wasn’t even in the batting order.

The conference title may only be the beginning for a team that is still young in terms of class, but has grown wise through years of summer travel ball and success in various middle schools.

When the season started a month ago, no one was sure what to expect since it was a new chapter for Hillsborough softball. Cedar Ridge lost five seniors after the pandemic-shortened season in 2020. Orange lost six, including two starters from its 2017 3A State Championship team.

“A lot of people thought we were young with new coaches,” Barefoot said. “Some might have thought with a new staff, we wouldn’t do very well. But I knew what was here and I knew what was coming with me. I was praying that COVID wouldn’t shut us down because I knew we could put the chemistry together. I had it in the back of my mind that we were capable of winning this conference.”

Orange’s last outright Big 8 Championship team was the 2017 state title squad, but it was a different time. For one thing, the regular season race was a full-fledged 14-game season, not a 7-game campaign sawed in half because of a pandemic. In 2017, there were four seniors in the starting lineup, along with freshmen Jaden Hurdle and Grace Andrews. The Panthers of Eddie Davidson went 26-3, but lost a conference game to J.F. Webb. They held off Northwood 3-0 in Pittsboro.

It was a stronger league back then. Nonetheless, the 2021 Orange team (7-0, 6-0 in the Big 8 Conference) has dominated its league counterparts with all the suspense of a mid-1980s Super Bowl blowout.

They’ve won all seven games by at least ten runs. None of the contests have gone beyond five innings.

With the Big 8 Championship now in the bag, Orange finds itself in a unique position. They have four more games against league opponents that won’t count as conference games, starting with Friday’s trip to Cedar Ridge. To get a sense of what awaits Orange in the 3A State Playoffs, Barefoot has scheduled a nonconfernece game at Southern Alamance on April 28 to guard against letdown.

“I was talking to the girls about it after Tuesday night,” Barefoot said. “I told them we’re going to work hard and take the rest of this season to prepare. Anybody in our conference can come up and knock our feet out from under us. I told them that. We have got to keep practicing hard and playing hard.”

Against Vance County, Barefoot installed freshman Caden Robinson in the pitching circle, where she improved to 4-0. In her fourth complete game, Robinson struck out eight, and allowed four hits and one unearned run with zero walks.

Vance County’s Tymiah Wimbush scored the game’s opening run in the 1st inning after she reached on an error. Pitcher Blake Vick drove her in on a fielder’s choice groundout. The Vipers had only three singles the rest of the day.

Orange took the lead in the second inning with two runs. After a leadoff infield single by Mary Moss Wirt, Savannah Wynn reached on a fielder’s choice. Right fielder Gracie Walker hit a grounder up the middle that reached the fence to bring in Wynne. Designated player Kelsey Tackett, who finished 3-for-3 with two runs scored, drove in Walker with a double that reached the fence in left centerfield.

Tackett opened the fourth inning with an infield single, freshman Delaney Shaffer lined a double to left centerfield to bring in Tackett and increase Orange’s lead to 5-1. Bradsher legged out an infield single to shortstop to bring in Shaffer. After Robinson walked, Jackson lined a 1-1 fastball to right field to bring in two runs. Wirt, who moved to third base for this game, reached on an error, leading to Bree Harris, running in place of Jackson, scoring.

Orange ended the game with two more runs in the fifth to complete the run-rule victory. Tackett and Shaffer opened with singles. McPherson looped a 0-1 pitch to right field, bringing in Tackett. Bradsher plated Shaffer with a single to right field.