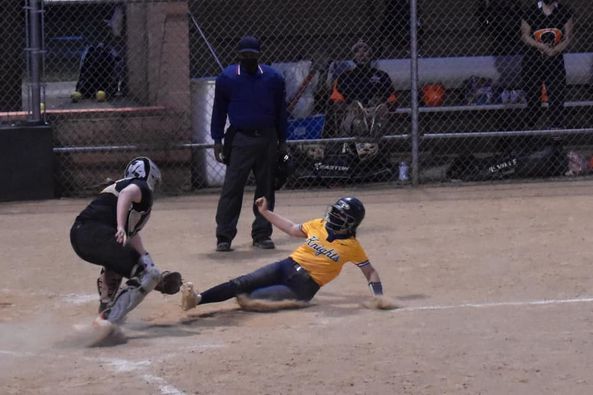 At least Northern Durham can say they were the first team to lead against Orange this season. In a campaign that has quickly turned into a Panther domination, the fact that the Knights gave the Lady Panthers its first dose of adversity for 2021 has to count for something.

But even when early fortunes aren’t going Orange’s way, Johnny Barefoot’s Lady Panthers have proven that they’ll simply create their own luck when the situation warrants it.

When all was said and done Tuesday, Orange still hasn’t had a game go beyond five innings this year. And the Lady Panthers are all alone in first place.

With the Big 8 Championship likely on the line due to the league’s peculiar setup this season, the Orange softball team scored ten unearned runs to defeat Northern 13-3 in five innings at Orange Softball Field on Tuesday night. With the win, the Lady Panthers are one game ahead of Northern with two conference games remaining.

Sophomore centerfielder Serenity McPherson laced a three-run homer over the centerfield wall to cap a five-run 2nd inning for Orange, where the Lady Panthers got all of its offense with two outs. Senior third baseman Emma Puckett, who finished 3-for-3, started the rally with a fly ball to right field that fell between three Northern players.

Orange pitcher Gracie Walker improved to 3-0 on the season with a complete game six-hitter.

Orange and Northern came into the game tied for first place in the Big 8 Conference with identical 4-0 records. It was certainly the biggest game for the Lady Panthers since 2019, when they faced D.H. Conley in the second round of the 3A State Playoffs in Greenville. The kicker is that two years ago, the majority of Orange’s starting lineup was at Stanford Middle School.

“I knew what was at stake, but I kept it quiet from them,’ Barefoot said. “Now that we’ve won this one, we just need to beat Vance County and it will be a done deal.”

Still, the big game dynamic was new for some Lady Panthers. Against a Northern team that started five seniors, the nerves were apparent early. Catcher Abi Walker doubled down the right field line to open the game against Walker, who had to shield her eyes from the fading sun behind home plate to catch the signals from catcher Lauren Jackson. After Northern’s Macy Ellis walked, second baseman Aubrey Clayton connected on a long single that brought in Walker. Ellis later scored on a groundout by Kassidy Smith to push Northern’s lead to 2-0.

It was the first time this year that Orange trailed.

On the very first pitch of Orange’s initial at-bat, McPherson slapped a line drive down the left field line for a triple. Shortstop Carson Bradsher looped a shallow fly to left field that was caught by Northern’s Alana Holland, and McPherson scored on the tag-up.

After Northern’s two runs in the first, the sun had faded into the trees, and Walker allowed only five baserunners the rest of the game. She retired eleven of the next 13 Knights she faced.

It appeared Orange would go quietly in the second after their first two batters were retired. Then Puckett singled, and Walker reached on a dropped ball by a Northern infielder. Designated player Kelsey Tackett hit a fly ball to centerfielder, which was also dropped and led to Puckett coming in to tie the game. Then McPherson delivered the pivotal blow of the night, a three-run blast to centerfield that carried all the way down to the old football practice field, valuting Orange ahead 5-2.

Bradsher lined a 1-1 fastball to right field and flew around the bases, eventually getting caught in a rundown between third and home plate. Bradsher took advantage of a low throw on the subsequent rundown to slide into home plate safely and put Orange ahead 6-2.

Orange added three more runs in the third. Jackson reached on an error. After Savannah Wynne got an infield hit on a bunt, Emma Puckett got aboard off a fly ball to left field, bringing in courtesy runner Delaney Shaffer. Walker sent a ground ball to shortstop, where Ellis made a diving stop for the out, but also scored Wynne. Tackett grounded an RBI single to centerfield to bring Puckett home and push the Lady Panthers lead to 9-2.

After Jackson started the fourth by reaching on another error, junior second baseman Mary Moss Wirt lined a double over the centerfielder’s head to score Shaffer. Puckett stroked a 1-1 fastball to left field for her second RBI, scoring Wynne.

Bradsher scored the game’s final run in the fifth. After she singled up the middle, Caden Robinson lined a comebacker off the left leg of Smith in the circle. The ball ricocheted off Smith’s leg into foul ground along third base, and Bradsher raced around the bases to put Orange ahead 13-3 to complete another run-rule victory. Smith walked off the field without help.

Orange will travel to East Chapel Hill on Wednesday. Since only the first matchups between two teams count in the conference standings, this will be a nonconfernece game. Orange defeated East Chapel Hill 14-1 on March 16 in Hillsborough.

Orange has two more conference games remaining. The first is against Vance County next Tuesday and the other against Southern Durham on a date to be determined.