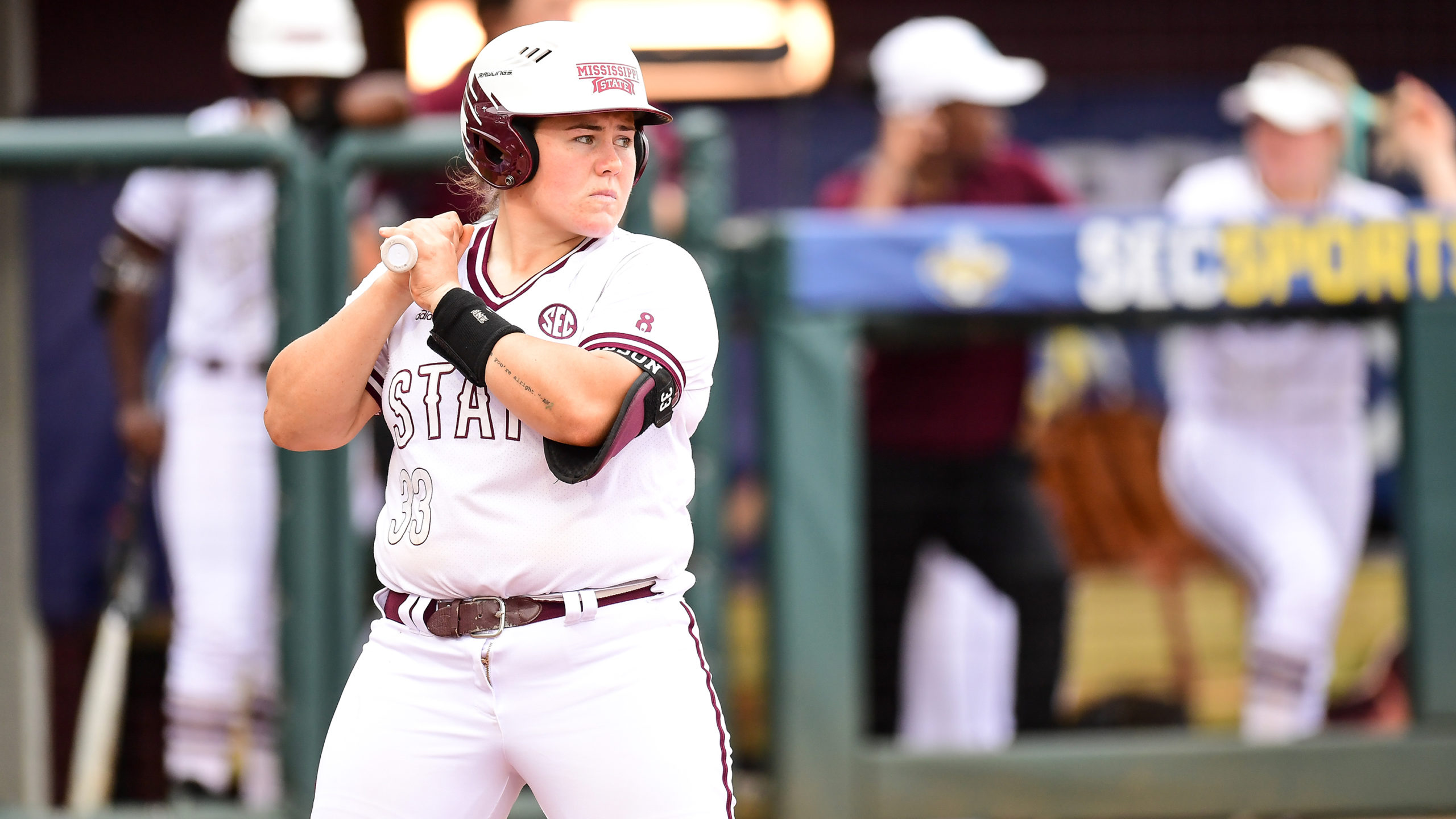 Mia Davidson: The Mississippi State softball team swept North Alabama in a doubleheader at Hilda B. Anderson Stadium in Florence, AL on Saturday. In the opening game, the Bulldogs trailed 7-1 at the end of five innings, but stormed back to win 9-7 in nine innings. It was Mississippi State’s largest comeback win since 2004. In the third inning, Davidson hit her 61st career home run, tying her with Will Clark on Mississippi State’s career home run list. She’s also now tied for sixth on the Southeastern Conference’s career home run list. In the opener, Davidson went 1-for-3 with two runs scored and two walks. She also drew a key walk that set up a grand slam by Fa Leilua that sparked the comeback. Mississippi State won the second game 9-1 in five innings, where Davidson went 0-for-2 with two walks. Last Wednesday, the Bulldogs edged Southern Miss 2-1 in nine innings. Davidson went 0-for-4 with one walk and one run scored.

Montana Davidson: Against Southern Miss last Wednesday, Montana had an RBI groundout which led to the first Mississippi State run. She finished 0-for-3 with the RBI. Against North Alabama, Montana started both games at third base. In the opener, Montana went 0-for-3 with two walks and a run scored. In the nightcap, Montana finished 1-for-3 and scored off a double by Leilua in the 4th inning. Mississippi State is 18-14 and will travel to Southeastern Louisiana today (Monday).

Jaden Hurdle: The Louisburg College softball team, #4 in the National Junior College Division II rankings, swept Patrick Henry Community College in a doubleheader in Martinsville, VA on Saturday. Hurdle started both games for Patrick Henry and went 0-for-6 combined in both games. Hurdle also started as pitcher in the second game. She threw five-and-one-third innings. She struck out five and conceded three runs and five hits. The Patriots are 8-12 overall, 4-4 in Region X of the NJCAA. Hurdle is hitting .396 over 18 games, which is 4th on the team. She has three home runs and 15 RBIs.

Marvin Jones: Another big week for the former Cedar Ridge Red Wolf. Jones was named the Mid-Eastern Athletic Conference Field Athlete of the Week after his performance last weekend at the Raleigh Relays, where he finished 2nd in the high jump. That was the MEAC’s best mark so far this outdoor season. On Saturday, Jones responded by winning the high jump competition at the VertKlasse Meeting in Dick Very Stadium at High Point University. Jones cleared 1.99 meters to take his first championship of the outdoor season for the Eagles. Tanner Henry of Wofford finished second at 1.94 meters.

Phillip Berger: Division III North Carolina Wesleyan baseball swept a three-game series from William Peace over the weekend at the USA Baseball Complex in Cary. Berger threw five-and-one-thirds innings of middle relief for the Pacers in the opening game of a doubleheader on Saturday, which the Battling Bishops won 4-0. Berger gave up seven hits, three runs, three walks with three strikeouts. So far this season, Berger is 2-2 with a 3.78 ERA in nine pitching appearance with four starts. Peace is 12-11 overall, 4-4 in the USA South Athletic Conference.

Dylan Boyer: Boyer tallied another goal for the Queen’s men’s lacrosse team in a 22-6 win over Lincoln Memorial at Dickson Field in Charlotte on Saturday. Boyer scored on an unassisted goal with 3:18 remaining in the first quarter to put the Royals ahead 8-2. Queens, which is ranked #15 in Division II, improved to 6-3 overall, 6-1 in the South Atlantic Conference. Boyer has played in nine games thus far in his freshman season with one start. He has five goals and four assists with the Royals, who will travel to Limestone on Wednesday.

Olivia Ward: The former Cedar Ridge All-Big 8 tennis player won for Division III Methodist University at the Clayton Tennis Center in Fayetteville on Saturday. Ward defeated Hannah Smith of Southern Virginia in #3 singles 5-7, 6-1 and captured a 10-point tiebreaker 10-3 to take the match. Southern Virginia won the team match 7-2. Later in the day, the Lions defeated Pfeiffer 8-1 in its final home match of the year. Methodist is 5-11 overall, 2-0 in the USA South Athletic Conference.

Adam Chnupa: The remaining game of the Elon football team’s season is in question. The Phoenix’s game against James Madison was postponed on Saturday because of COVID-19 protocols at Elon. A decision on rescheduling the contest will be made at a future date. This was supposed to be the regular season finale for Elon, who are 1-5 overall, 0-4 in the Colonial Athletic Association. Chnupa, a former All-Big 8 Conference linebacker at Cedar Ridge, has played in every game for the Phoenix this year.