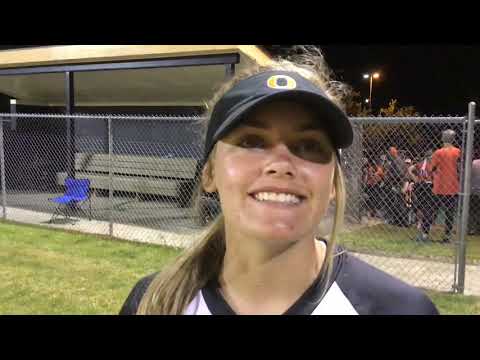 The Cedar Ridge softball team seemed to do it all in its conference opener against Northwood.

Northwood’s Shakhai Mole scored off a grounder by freshman Carolina Garner in the bottom of the eighth inning to propel the Chargers past Cedar Ridge 17-16.

As you may have guessed, it was a night of offense. The two teams combined for 35 hits, eight extra base hits and 18 walks.

It was a costly loss for the Red Wolves since the Big 8 Conference standings will only include the first games against league opponents, the same format that was used in volleyball, men’s and women’s basketball this year.

In what will probably be a theme this season, Cedar Ridge’s Takia Nichols hit a solo homer to lead off the third inning, then was intentionally walked in her final four plate appearances. That included an intentional pass in the fifth inning–with the bases loaded.

Even with Nichols’ powerful bat taken out of her hands, Cedar Ridge still managed to erase an 11-4 deficit in the fifth inning, incredibly starting a seven-run rally with two outs. After Olivia Aitkin reached on an infield single Marlee Rakouskas lined a hit to center field. Alexandria Matthews’ bloop to the outfield scored Aitkin. Sophomore Anaya Carter walked to load the bases, which led to the Nichols walk, bringing in Matthews.

ShiLi Quade reached on a bunt to first to score Matthew. Junior Ava Lowry came up with a three-run double to clear the bases. Aitkin, in her second at-bat in the inning, double to left to score Lowry and tie the game at 11-11.

Northwood took the lead back with a run in the fifth when Caroline Dorshimer scored off a groundout by Garner.

The Chargers led 14-11 when Cedar Ridge scored five runs in the top of the seventh inning. Carter hit a leadoff single, followed by the obligatory Nichols walk. Quade loaded the bases with another bunt single. Lowry’s sacrifice fly to left scored Carter. Aitkin hit another sacrifice fly to plate Nichols. Senior Reagan Rhul doubled to left center to score Quade and Lowry and give Cedar Ridge a 15-14 lead. Hayley King legged out an infield single to bring in Ruhl and Cedar Ridge extended its led to two runs.

Northwood forced extra innings when Zoe Hatzidakis doubled down the left field line, leading to a run from Carlee Harris. With two outs, Sarah Warfford reached on an error, leading to Hatzidakis tying the game.

Cedar Ridge will host Chapel Hill on Friday afternoon at 5:30. That game can be heard on Hillsboroughsports.com.

HILLSBOROUGH-Johnny Barefoot’s debut as the coach of the Orange softball team didn’t have very much drama. But there was plenty of hitting and even better pitching.

Orange rolled past East Chapel Hill 14-1 in five innings at Panther Softball Field on Wednesday afternoon. It was the season opener for both teams.

Junior Gracie Walker earned the victory in the circle. She threw three innings and finished with seven strikeouts. Walker surrendered two hits, one runs with one walk. Freshman Kaden Robinson and junior Courtney Watkins finished out the final two innings in mop up duty.

The Lady Panthers amassed eleven hits with every player in the starting lineup getting aboard. In her first varsity game, Robinson finished 4-for-4, nearly hitting for the cycle. She had a double and a triple.

Junior Mary Moss Wirt, who has committed to play at Elon, went 2-for-3 with two doubles and 2 RBIs. Senior Emma Puckett went 1-for-3 with a double.

Orange (1-0) had a game scheduled against Vance County on Thursday but it was rained out. The Lady Panthers will host Cedar Ridge on Tuesday in what will be the only game between the crosstown rivals that will count in the Big 8 standings.