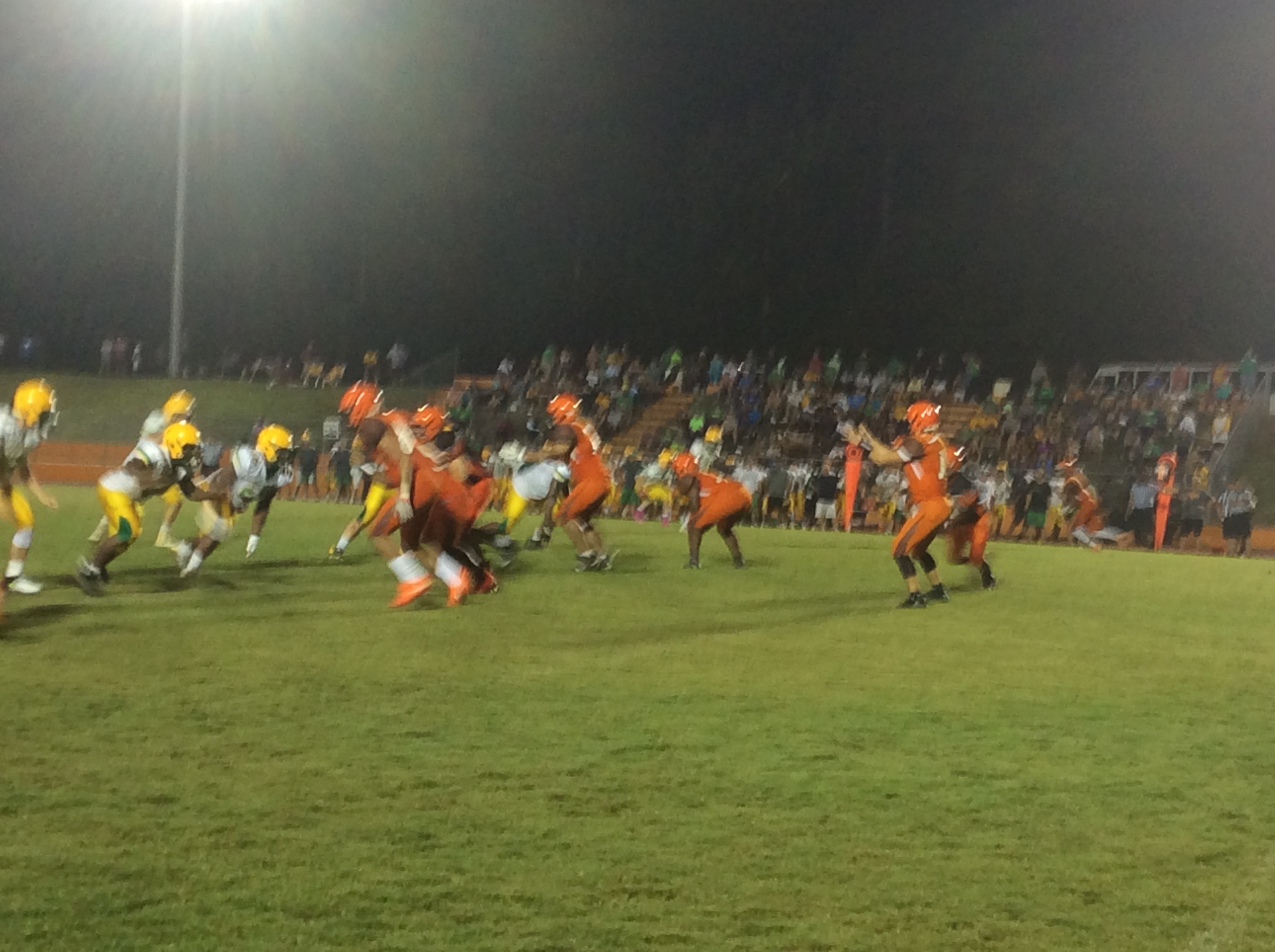 On paper, it was a scrimmage. The atmosphere at Auman Stadium on Friday night felt like something more.

A tweet on Friday afternoon from the Orange Football account read “We only have 4 home football games this season. So we are treating this scrimmage tonight like a game!” The visitors from Eastern Alamance packed the visitors grandstand, possibly as full as it will be for any of Orange’s four regular season home games. And it was certainly no scrimmage to Marvante Beasley.

The Orange senior running back rushed for two touchdowns in the second quarter as the Panthers defeated the Eagles 27-13. It was Orange’s final tuneup before its regular season opener at Northern Nash next Friday.

Last year’s scrimmage against Eastern Alamance teased the potential of the Panthers. They held the Eagles to four first downs, but struggled offensively, which proved to be the team’s undoing months later in the state playoffs against Havelock.

Transitioning away from a double wing setup to a spread offense under new offensive coordinator Steve Burdeau, Orange looked like a team learning a new offense early. In its initial drive, a shotgun snap went over starting quarterback Rodney Brooks’ head at the 3-yard line. The subsequent punt traveled ten yards, leading to Eastern Alamance scoring on a two-yard run by running back Tre Boseman.

Orange Coach Van Smith says the team is ready to delve deeper into the spread offense, but first they must learn the basics.

“They’re eager to learn it,” said Smith. “Right now, (Coach Burdeau) has the vanilla ice cream in the bowl. As he starts adding in the sprinkles and the chocolate chips and the syrup and all that good stuff, it’s going to get better and better as it goes. I’m exciting to see where it goes.”

Brandon Huss, the backup to starter Jackson Schmid, entered the game on the next drive and found wide receiver Payton Wilson, who carried three Eagles with him over midfield for a 21-yard gain that also vaulted Orange out of its doldrums. After an interception by Colin Guetensberger, Beasley scored on a 34-yard toss sweep.

The Panther defense returned to form in the second quarter, limiting the Eagles to one yard of total offense. After Beasley converted a 3rd-and-6 with a ten yard run, junior running back Hunter Pettiford scored on a 16-yard run to give Orange a 14-6 lead. Beasley ended the first quarter with a 52-yard scamper.

The Panthers played four quarterbacks with Brooks getting the start. Huss, the backup to starter Jackson Schmid last season, also saw action during the first half. Wilson and Travis Ray played during the final quarter. Smith has yet to name a starter for opening week.

“We’ll have it nailed down by Monday,” said Smith. “That’s up to the quarterbacks coach and the offensive coordinator. All three are looking pretty good.”

In the final minute, Ray found Sebastian Flores for a 45-yard gain. After a dropped pass in the end zone, Ray found Milton Purcell on a short dump off, but Purcell escaped early turbulence and found the wide side of the field to score a 15-yard touchdown on the final play of the night.

Beasley finished with 97 yards on six carries. Of the four quarterbacks, Ray finished 3-of-6 for 66 yards and a touchdowns. Huss finished 4-for-8 for 34 yards.

You can hear the Orange-Northern Nash game next Friday at 6:45 here on HillsboroughSports.com.