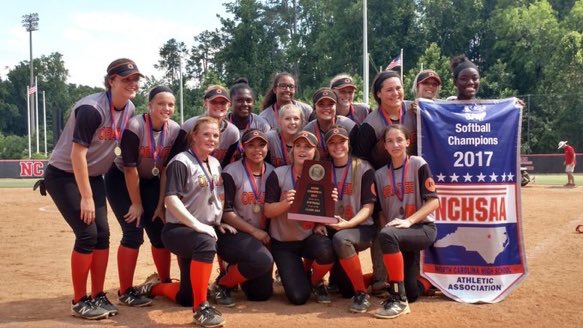 The path to Orange’s 1st Regional softball championship was one where logic didn’t apply.

On May 26th, West Brunswick wheeled into Hillsborough riding an 18-game wining streak, fresh off an 8-5 win over Orange in Shalotte in the opening game of the best-of-3 Eastern Regional Series. Torrential rain throughout the week and North Carolina High School Athletic Association guidelines forced the series to end on May 26th, which meant Orange had to beat WBHS twice in one night.

How could a team lose twice in one night when they hadn’t lost once in two months?

Logic would dictate that the player most responsible for Orange’s success, Mia Davidson, would play the largest role in overcoming the daunting task of winning twice in one night against the Mideastern Conference champions.

Yet Davidson labored through the worst slump of her high school career, going 0-for-6 with two walks. She was hit by pitches three times.

The most important at-bat of the series came in game 2 from sophomore Olivia Ruff, who launched a grand slam to cap a five-run 1st inning.

It was the first home run of her career. Not just in a high school game, in ANY game.

When West Brunswick fought back to narrow the Orange lead to 5-4, sophomore Alisha Pettiford pounded a two-run homer to left, ensuring a third and deciding game.

It was Pettiford’s second career home run. Because you know how that goes.

Logic would imply that, in the third game, an Orange senior would step up in a crucial role, which proved true.

Except Enzyah Holt didn’t start. She was a courtesy runner who came in whenever pitcher Kristina Givens got on base.

In two separate instances, Holt drew throws from West Brunswick’s catcher that wound up in the outfield, and scored each time. That, and Givens’ arm which logged 230 pitches on the night, was enough to carry Orange to a 5-1 win.

That’s only a partial list of the dramatic, quirky, strange and downright funny events that comprised Orange’s run to its first 3A State Championship, which ended with a 4-1 victory over Piedmont on Saturday at Dail Softball Stadium at N.C. State in Raleigh.

If the heroes of the regional series against West Brunswick were underclassmen, the state title series was carried by Orange’s three senior captains.

Piedmont outplayed Orange in game 1 on Friday night. They had nine hits, while Orange had half of its six hits in the sixth inning. After freshman Jaydin Hurdle knocked in senor Abby Hamlett in the first inning to take a 1-0 lead, the Panthers were limited to one baserunner in the next four innings.

By the time the sixth inning rolled around, Piedmont led 2-1 off an RBI groundout by Gracie Rape which scored Avery Bellai.

Sophomore Hayley Funk lined the first pitch of the bottom of the sixth into left field. After Grace Andrews moved Funk to 2nd with a sacrifice bunt, Davidson came to bat.

Piedmont coach Jason Phelix had no intention to pitch to the most prolific home run hitter in state history with a state championship on the line. He instructed Rape to pitch around Davidson, who still took a cut on a 1-0 fastball.

Then Rape made the mistake of coming too close to the plate with a 2-1 fastball. Davidson placed it almost 300 feet over the centerfield wall, nearly hitting a shed that stores a tractor for the N.C. State ground crew.

Orange led 3-2. They never trailed again in the series.

“I had been in a slump,” said Davidson. “I told myself to relax and do what I gotta do. I finally did.”

Game 2 on Saturday was your typical early summer playoff game. It was 88 degrees, about three degrees above normal in Raleigh. On the field, the heat index was 95.

Heat was the latest obstacle for an Orange team that has dealt with adversity through a variety of settings, but it was something that anyone with summer softball experience deals with regularly. Many of the Orange players, along with Piedmont, journey throughout the southeast playing on travel teams.

The players know in advance that heat of the day playoff games means more than just suburns and excess sweat.

And Givens got lightheaded in the dugout.

“She felt like she was going to throw up,” said Davidson.”

“You have to remember you aren’t playing for yourself, but everybody else,” said Givens, who will focus on a medical career in college. “When you state think about that, you stop thinking about how you feel.”

“She’s the best pitcher in 3A softball,” said Davidson. “That’s more heart than any kid I got. Pitching isn’t about throwing the right pitches and throwing hard. It’s about enduring, overcoming and persevering.”

Givens led the defense. On offense, Hamlett went 4-for-7 in the series, scoring twice. In the top of the seventh, she lined a single to left, scoring Funk and Davidson, putting Orange ahead 4-1 and starting a raucous celebration for the Orange fans along the 1st base line.

It was the final time Hamlett would swing the bat in an Orange uniform, a fact that wasn’t lost on her afterwards.

“I’m glad this was how I was able to go out,” said Hamlett with tears in her eyes. “It’s sad, honestly. I’ll never step foot on a softball field again.”

“She was really the key who brought it all together this year,” said Davidson. “She came to me before practice one day and said she would move to shortstop so she could cover Mia’s throws. I said ‘Let’s do it.’ She’s been clutch.”

“Our three captains all did something for us to win this weekend,” said Davidson.

Davidson’s biggest chore for next year is the unenviable task of replacing his daughter, possibly the greatest female athlete in Orange history. He’ll also need a new pitcher, a role that Hurdle may assume.

Those are problems for tomorrow. For now, he can look back on his team’s incredible run through the state tournament, and a state championship that will last forever.