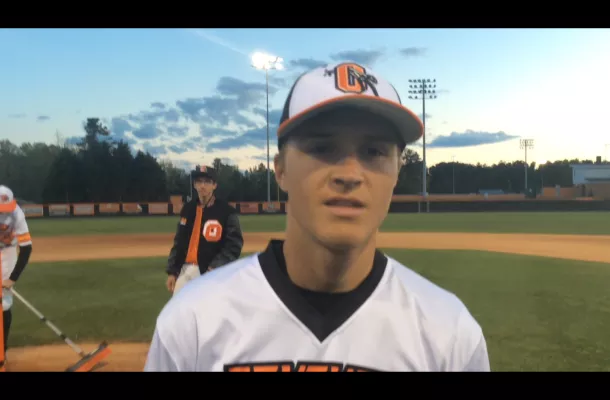 The Orange baseball team currently has more cliffhangers than a soap opera block on Friday afternoon.

Orange has four games that were either rained out and are awaiting rescheduling or suspended because of weather or darkness.

Two weeks ago, Orange’s game against Northern Vance was halted in the top of the 14th inning tied 3-3. The following Friday’s game against Chapel Hill in Hillsborough was rained out.

On Wednesday, the Panthers somehow completed five innings in a regularly scheduled game against East Chapel Hill before it was suspended because of rain. The Wildcats led 2-1 at the time of the stoppage. That game will be completed on Monday afternoon in Hillsborough, followed by another game between East and Orange that was rained out in March.

The Panthers are  4-5, 2-1 in the Big 8 after beating Southern 7-1 on Tuesday. Orange trailed 1-0 before a 4-run 3rd inning. Shortstop Joey Berini singled to right field to score freshman right fielder Cooper Porter. Jaydin Poteat, who singled to center earlier in the inning, scored off a throwing error to give Orange the lead for good. Berini scored off a wild pitch. Second baseman Jason Slaughter walked, and eventually scored off a sacrifice fly by Caige Clayton.

In the 4th, catcher Ryan Puckett, returning after suffering an injury to his right hand, walked. Rodney Brooks replaced Puckett as a courtesy runner, and Porter followed with his first career RBI on a line drive down the right field line, scoring Brooks easily.

Left fielder Dalton Brown singled to lead off the 6th. After advancing to second and third off wild pitches, Brown scored after Porter lifted a fly ball to left field that was misplayed. Slaughter earned the game’s final RBI by drawing a bases-loaded walk, plating Porter.

Orange travels to Southern tonight at 6:00.