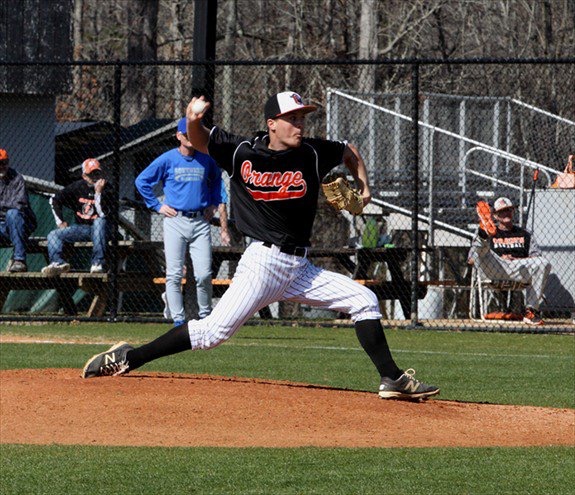 After dropping a game against Southern Lee two weeks ago, Orange Baseball Coach Dean Dease said he hoped his club would be a good team by April.

While the Panthers aren’t there yet, they took a forward step on Tuesday night.

Joey Berini hit a two-run single in the fifth inning, while Dalton Brown went 2-for-3 with 3 RBI as Orange (2-4, 1-0 in the Big 8) defeated Northern Vance 9-8 at Panther Field. Brown, who started in left field, came on in relief of starter Derek Lindaman for his first save.

After the Vikings scored two runs in the 2nd, the Panthers extended its lead to 6-2 in the 3rd inning when Brown singled off a Baltimore chop over the head of Vikings third baseman Chris Stainback, scoring Slaughter and Noah Rogers, who doubled earlier in the inning.

Northern Vance narrowed the gap to 6-5 after scoring three runs in the 5th after three Orange errors.

The Panthers came right back with three more runs in the bottom of the inning. After Caige Clayton drew a one-out walk, Nichols reached on an infield single. Both runners advanced off a throwing error. Catcher Dylan Hall was hit by a pitch to load the bases. Berini hit a bouncer over second base that found its way into centerfield to score Clayton and Brown. With Cooper Porter running for Hall, Poteat reached on an infield single, leading to a throwing error that scored Porter to put Orange ahead 9-5.

Northern Vance never quit, scoring two more runs in the sixth and another in the seventh. After shortstop Payne Harris scored off a Qwadre Hanks RBI groudout, the Vikings cuts Orange’s lead to 9-8 with two out in the seventh. Brown struck out Ryan Stainback to end the game.

Orange travels to Northern Vance on Friday at 4:30. You can hear that game here on HillsboroughSports.com.