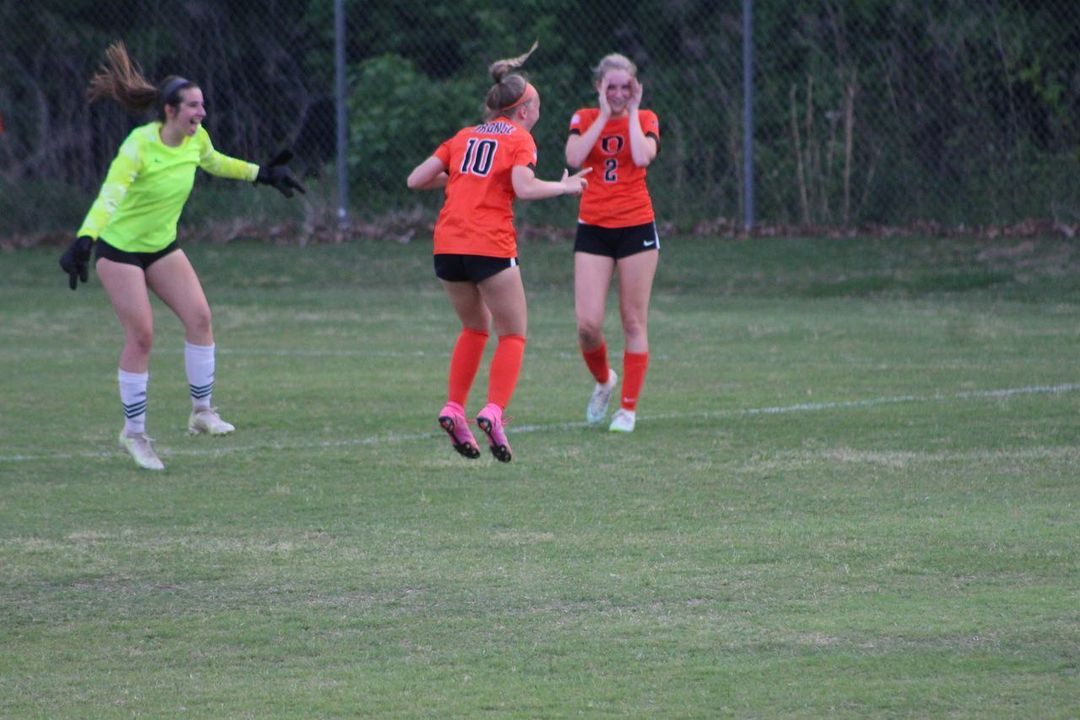 The Orange women’s soccer team is the lowest-remaining seed remaining in the state playoffs.

That’s not just in the 3A State Tournament. That goes for all four classifications sanctioned by the North Carolina High School Athletic Association (actually, Orange is a #23 seed. So is Cardinal Gibbons, who will face Middle Creek in the 4A State Tournament tonight in Cary).

Tonight, Orange will attempt to reach the state quarterfinals when they face Walter Williams in Burlington. Kickoff is at 7PM.

The Lady Panthers’ run to the third round of the state playoffs may be a surprise to some outside observers. For many of the players, however, it continues a wave of confidence that started after a double-overtime loss to eventual Central Carolina Conference champion Eastern Alamance on April 12 in Hillsborough. Since then, the Lady Panthers have gone 6-2.

For a select few players, they knew something special could eventually happen for Orange women’s soccer way back in 2018.

In 2018, the Chargers defeated longtime power Phillips 2-1 in the championship game, avenging its only loss in the regular season. Orange Middle finished 7-1 that year. It was the only time in school history where the Chargers defeated all four of its OPAC rivals in the Southern Division (Phillips, Culbreth, McDougle and Smith) in a single season.

It was a milestone for Orange Middle School soccer. Now, some of those players have led Orange High to another milestone–the best postseason run in the 34-year history of women’s soccer at Orange.

Preparing how to train some of those players is something Lady Panthers head coach Jacki Mignosa was mulling back when Garcia was still in eighth grade, while Orange, Torkewitz and Rogers were in the seventh.

“When I had this group come up, it was ‘Let’s get them trained,'” Mignosa said. “Let’s get them working together, playing together constantly. Then, by the time they’re juniors and seniors, then this is where we are. And it worked.”

There have been notable additions along the way. Senior Bella Brown arrived in 2020 from Burlington Christian Academy . Brown scored a hat trick in Wednesday’s 5-2 win over Cape Fear in Fayetteville, ending the night with a stunning goal from 20 yards that sailed across the 18-year-box into the left corner of the night. It was her ninth goal of the season.

Freshman Elliana Sullivan Gaddy, who leads the team with 12 goals, went to Central Park Middle School in Durham. She plays with the Mebane Youth Soccer Academy as her travel team.

“This is the best soccer I’ve ever played in my life,” Sullivan Gaddy said the day after she scored two goals in a 5-3 win over Harnett Central. “It’s the most welcoming community that I’ve had. Eastern Alamance was the toughest team we’ve had to play. It has been a pretty tough conference.”

Orange was supposed to face Williams on Monday night, but it was postponed after severe storms tore through the Triad, which is appropriate. The Orange-Williams regular season series was as unpredictable as a North Carolina spring.

On April 14, Williams rolled past Orange 2-0 in Hillsborough. The following week, Orange traveled to Burlington and pounded the Bulldogs 5-0. It was Williams’ most lopsided loss of the season. Lady Panthers goalkeeper Abby Monteith notched the clean sheet.

Whatever happens tonight, this group of Lady Panthers will walk off the pitch knowing they’ve done something that no over Orange team before them ever did. The deepest playoff run in school history.

“I think it’s going to be a tough game,” Mignosa said “I really do. We split with them this season. So it’s going to be another battle. But as I told my team, I believe in them. And they just have to believe that they can do it.”