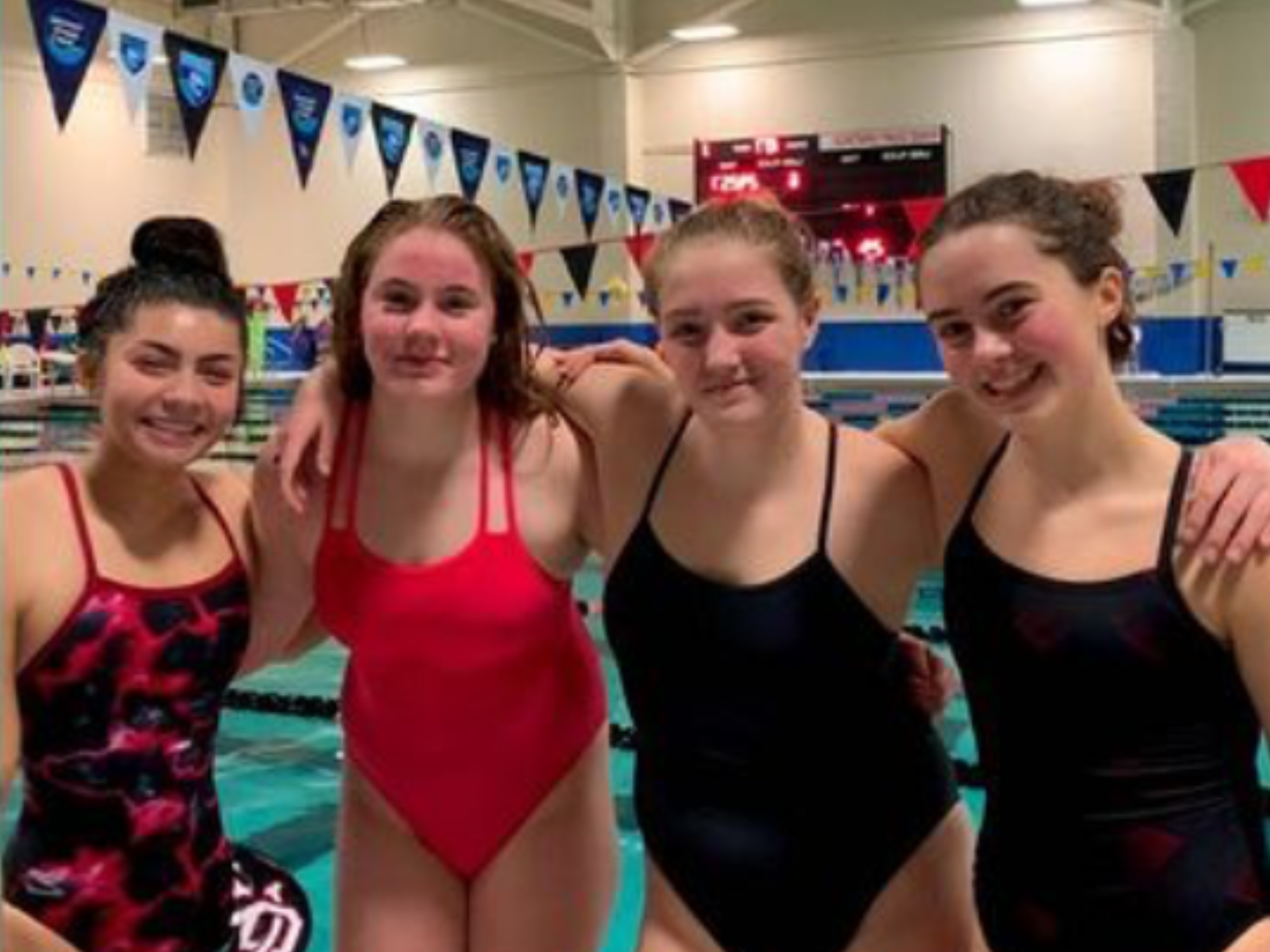 For the swimmers at Orange and Cedar Ridge High Schools, the Orange County SportsPlex is a second home.

Unlike most other athletes who practice in the afternoons, swimmers typically work out before school, usually showing up for practice at 6AM several days per week.

Naturally, it was where Orange held its senior night last Wednesday. Inside the daycare center that was once the home of the workout center in the Sportsplex’s formative years, the swimmers were honored by head coach Ron Geib while Orange Principal Jason Johnson, Athletic Director Mark McCauley and retired baseball coach Dean Dease watched on. While several Cedar Ridge and Orange seniors qualified for February’s 3A Central Regionals at the Greensboro Aquatic Center, one Cedar Ridge relay team that runs the gamut on the experience spectrum made it a senior night to remember.

The Orange contingent of sophomore Katie Belle Sikes, Sandra McCouch, Melissa Campbell and Ellie Wileman won the 200 yard freestyle event at 1:50.02, edging a team from Walter Williams by three-tenths of a second. Sikes, McCouch, Campbell and Wileman had already qualified for regionals in the 200 yard medley relay. On Thursday, they finished second behind a team from Northwood at 1:59.67.

The irony on senior night was a number of freshman set personal bests in their young careers to advance to Greensboro. Cedar Ridge’s Stinnett qualified for four regional events. In addition to the two relay races, she finished 2nd in the 100 yard freestyle at 58.09 seconds. Stinnett also qualified in the 100 yard backstroke at 59.67 seconds.

In the 100 yard Butterly, McCrimmon earned a trip to Greensboro in the 100 yard butterfly, finishing third at 1:07.05. Orange senior Melissa Campbell also automatically qualified at 1:07.26.

Orange sophomore Katie Belle Sikes, who finished second in the 3A State Championships in the 50 yard freestyle last February, won the 200 yard freestyle at 1:56.81. Belle, who had already qualified for the Central Regionals in four different events earlier this year, also won the 100 yard backstroke, touching the wall at 59.71 seconds.

Orange senior Sandra McCouch set a new personal best in the 200 yard Intermediate at 2:29.65. McCouch qualified for Regionals in the opening meet of the season in November.

Overall, Roman qualified for three regional events. Roman and Andre teamed with junior Andrew Weeks and another freshman, Nick Baczara, to win the 200 yard freestyle at 1:42.52.

The Cedar Ridge men’s team had several strong freshmen of their own.

The 3A Central Regionals will take place Saturday, February 5 at the Greensboro Aquatic Center.

The 3A Central Diving Championships will be held Thursday, February 3. Orange’s Statz Zitko, who has already finished in the top three in the 3A State Championship three times in his career, has qualified for regionals once again.