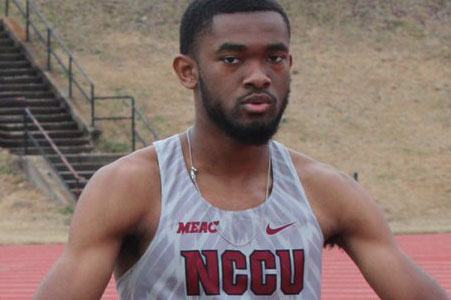 Robert Jones: After capturing the gold medal at the Mid-Eastern Athletic Conference Championships in the high jump, former Cedar Ridge Red Wolf Robert Jones earned his third victory of the season. Last weekend, Jones finished first in the men’s high jump at the Aggie Classic Twilight at North Carolina A&T State University in Greensboro. Jones’ winning jump was 2.05 meters. This season, Jones has not finished outside the top-five in any of the events he’s competed in. He now heads to the NCAA Eastern Regional Championships, which will start Thursday inside Hodges Stadium in Jacksonville, Florida.

Mia Davidson: The Mississippi State softball team’s season came to an end over the weekend in the Stillwater Regional of the NCAA Softball Tournament. The Bulldogs opened play with a 3-1 win over Boston University on Friday afternoon at Cowgirl Stadium in Stillwater, OK. On Saturday afternoon, #5 Oklahoma State defeated Mississippi State 9-3. In the elimination game on Saturday night, Mississippi State easily defeated Campbell 12-0 in five innings. Oklahoma State eliminated the Bulldogs 10-2 in five innings on Sunday afternoon. Mia Davidson opened the tournament going 1-for-3 against the Terriers. She had an RBI fielder’s choice to score Aquana Brownlee in the fifth inning. In the first game against the Cowgirls, Mia went 1-for-3. Against Campbell, Davidson hit the 69th home run of her career. That moved her into sole possession of 2nd place all-time in Southeastern Conference history. It was also her third home run in the NCAA Tournament for Mississippi State, another school record. Mississippi State broke a school record with four home runs in an NCAA Tournament game. In the third inning, Mia tagged out Campbell’s Katelyn Chisholm at the plate. Davidson went 1-for-2 in her final game of the season. Mississippi State took a 1-0 lead in the opening inning after Davidson drove in a run with a single up the middle. It was her seventh career RBI in the NCAA Tournament, which is third in school history. She also reached base for the 20th straight game, a new career-high. Mia ended the year with a .311 batting average after starting all 60 of the Bulldogs’ games. She was second on the team with 17 home runs. She also registered 42 RBIs. Davidson, who was accepted into graduate’s school last month, will enter her senior season only two home runs shy of the SEC record, held by Florida’s Lauren Haeger.

Montana Davidson: Montana started all four of Mississippi State’s games at third base in the NCAA Tournament. Against Boston University, she singled up the middle in the sixth to knock in Christian Quinn for the game’s final run. Montana finished 1-for-3 against the Terriers. She went 0-for-3 against Oklahoma State. Later in the day against Campbell, Montana finished 1-for-3. She scored in the 3rd inning off a Carter Spexarth. On Sunday, Davidson drove in the final Mississippi State run of the year with a single in the 2nd inning. For the season, Montana finished with a .252 batting average in 58 games. She had three home runs and 21 RBIs. Mississippi State finished the year 34-23, which included an 8-game winning streak down the stretch. Montana is a senior, but can opt for another year of eligibility after the COVID-19 pandemic ended the 2020 season before the NCAA Tournament started.

Tori Dalehite: After winning the Southern Conference Championship for the first time, the UNC Greensboro softball team participated in the NCAA Tournament for the first time this weekend. Duke defeated the Spartans 2-0 in the opening game of the Athens, Georgia regional at the University of Georgia. Western Kentucky ended the Spartans season 8-4 in the elimination game at Jack Turner Stadium. Dalehite, a freshman, didn’t play in either game. This year, Dalehite appeared in 12 games, almost exclusively as a pinch runner. She had one at-bat, walked once and scored six runs. UNCG finished 34-17, 14-4 in the Southern Conference.