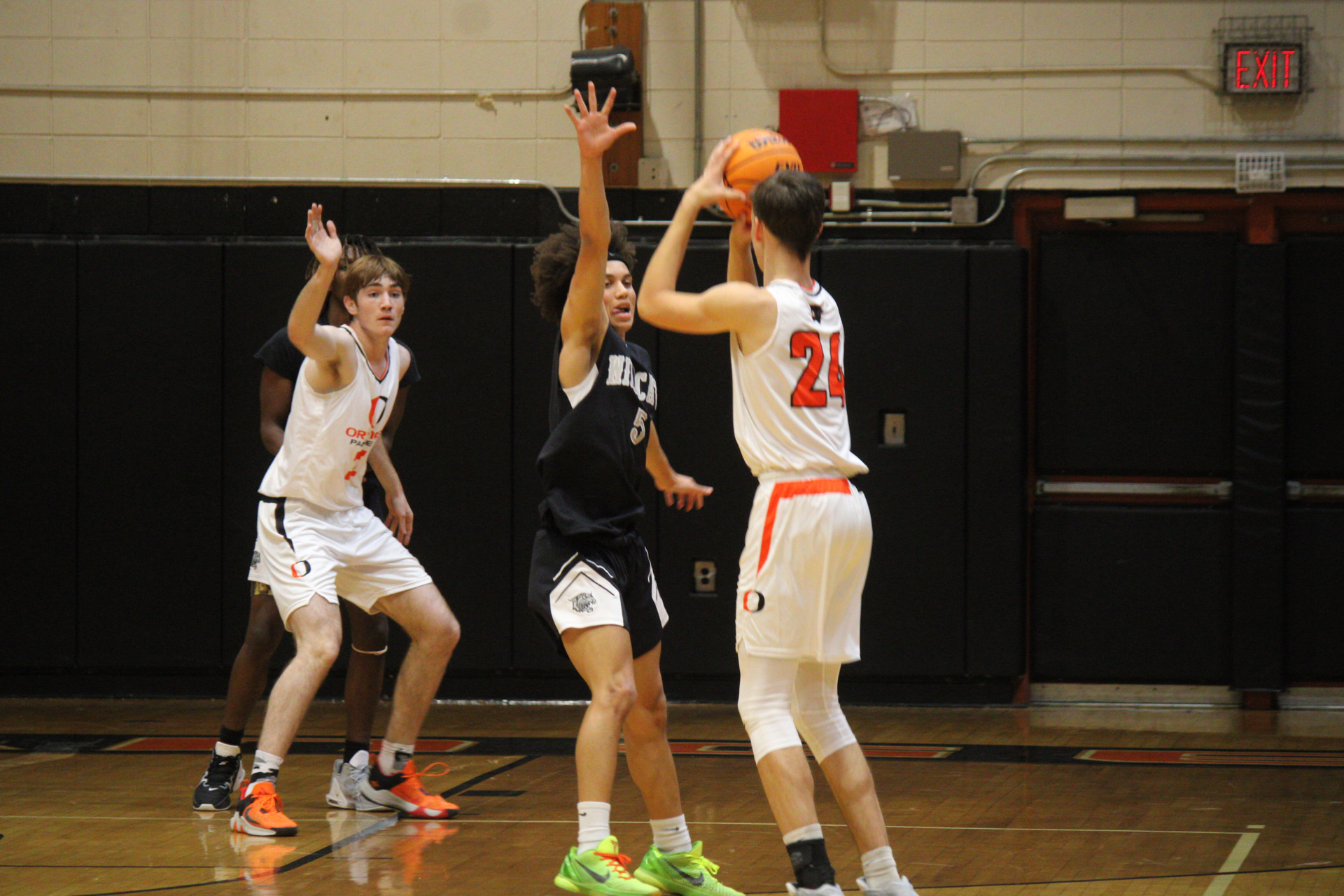 The victory was Orange’s third road victory of the year. Last year, the Panthers won three road games all season.

Orange hit a trio of 3-pointers in the first quarter to push its lead to 11-2 in the first quarter and largely cruised from there. With Orange coach Derryl Britt utilizing a full-court press, the Panthers got a three-pointer from Cloer, followed by another from Pinnix. Cloer had eleven points in the opening quarter.

Another freshman, Kai Wade, finished with eight points. In the waning moments of the third quarter, Wade took a rebound from Thomas Loch and threw in a desperation 3-pointer at the buzzer.

Orange (5-2) has opened the season with four road games in seven contests. After starting the year with a victory over East Chapel Hill at home, the Panthers got a one-point win at Franklinton when Cloer hit two free throws with :7.2 seconds remaining. Three days later, Orange held off Riverside 59-56 at Chambers Court, Orange’s first win over the Pirates since 2013.

Most nights, Britt starts at least four players playing their first season at the varsity level. Cloer and Wade are freshmen. Junior Ryan Honeycutt played baseball last spring before earning a spot on the basketball team because his 6-foot-6 frame was too much for Britt to ignore. Honeycutt had ten points against Carrboro.

A huge shot from sophomore Addie Atkins propelled the Orange women’s team past Carrboro at Jaguars Gymnasium in the opening game of the doubleheader. It was the Lady Panthers’ second straight road win.

With Carrboro leading 34-32, Atkins took the ball after a held ball and calmly drilled a three-pointer with 3:19 remaining in regulation. Just moments earlier, Carrboro’s Yazmin Paisant put the Jaguars into the lead with a running one-hander. It was the Jaguars’ first advantage since the early moments of the game.

It was Atkins’ only field goal of the night, but Orange finished the game on a 9-2 run. Moments later, Nikayla Whitted scored on a drive to vault Orange ahead 37-34.

Whitted had a career-high 14 points, the only Orange player in double figures. Senior center Erin Jordan-Cornell finished with seven points to help the Lady Panthers (3-3).

Carrboro (1-3) was led by Briana Campbell, who finished with 12 points.

Jordan-Cornell picked up two fouls in the first quarter, depriving the Lady Panthers of its main low-post presence for most of the first half. Whitted made up for it with ten points in the first half, including two 3-pointers in the opening quarter.

Jordan-Cornell scored all seven of her points in the third quarter. Senior Addie Reid finished with six points.

Orange will have one final nonconfernce game before its Central Carolina Conference opener next week. The Lady Panthers will host the Durham School of the Arts on Friday night at Panther Gymnasium at 6PM. Orange will have three CCC games next week, starting with a road trip to Western Alamance on Tuesday night at 5:30. Orange will host Northwood, the defending 3A State Champions, next Wednesday night. They will travel to Walter Williams on December 16.