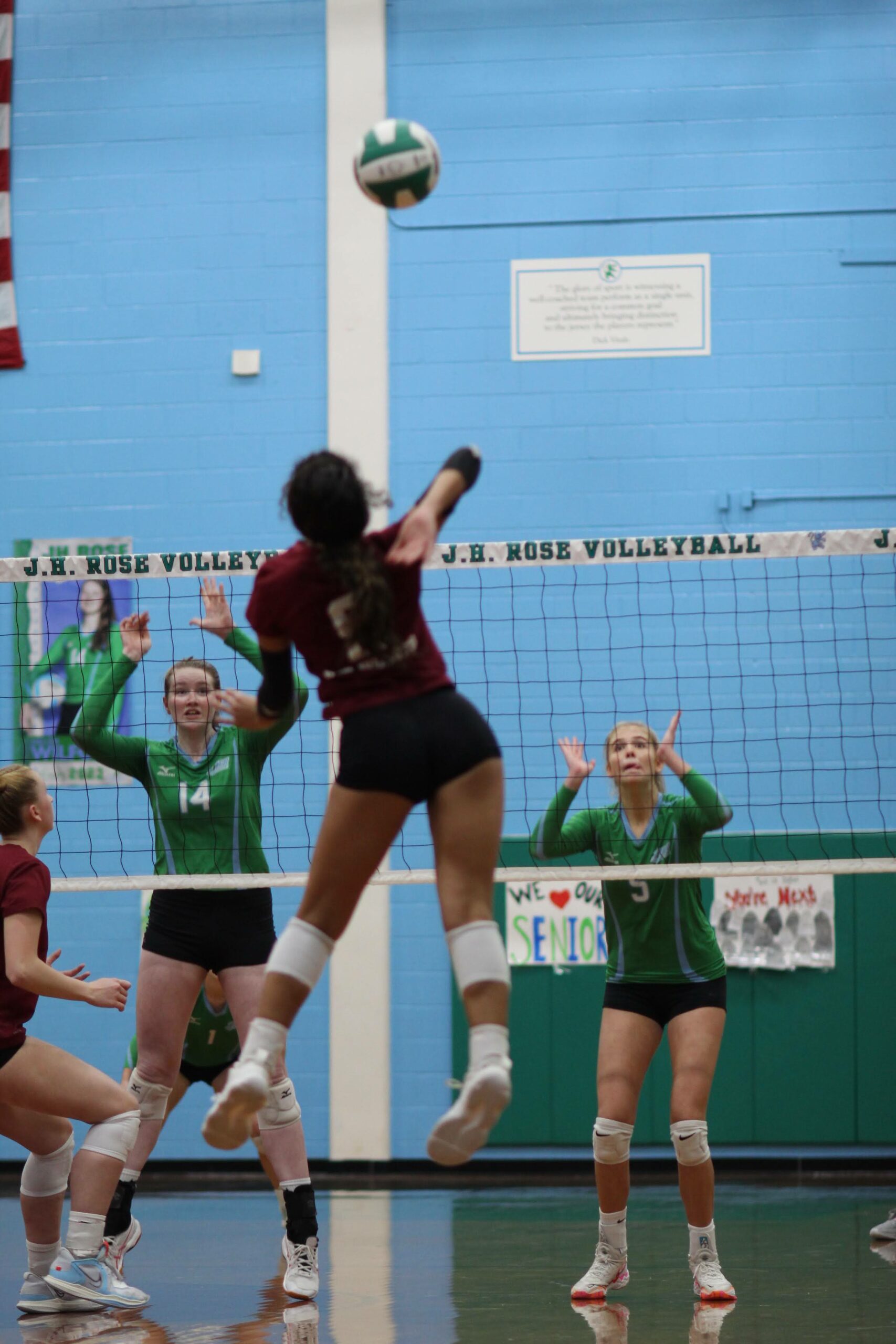 GREENVILLE–The city of Greenville will always be linked to the most successful senior volleyball class in Cedar Ridge history.

It’s where the Red Wolves suffered its first loss under head coach Fiona Cunningham. It’s where they first served notice to the rest of North Carolina that there were a state championship contender, a dream they later fulfilled in 2021.

Now, It’s where their unparalleled run in Hillsborough volleyball history has ended.

After their first meeting in August, when J.H. Rose defeated the Red Wolves in four sets, the Rampants spent the whole season ranked #1 in the 3A East Region while Cedar Ridge was #2. As both teams disposed of one conference opponent after another, almost always in straight sets, it seemed destined that they would collide in the Eastern Regional Championship match.

On Tuesday night, the inevitable battle finally took place, but it was anticlimactic.

The Rampants (28-1) rolled to a 3-0 win over the Red Wolves in front of a crowded gymnasium at Rose High on scores of 25-17, 25-20 and 25-17. J.H. Rose will face North Iredell for the 3A State Championship on Saturday at Reynolds Coliseum in Raleigh.

Going into Tuesday, the theme around Cedar Ridge circles was redemption after the August loss to the Rampants. Red Wolves coach Fiona Cunningham wasn’t on the sidelines for the initial matchup because of illness. Cedar Ridge had beaten the Rampants in three sets last November to win the Eastern Regional championship, which led to expectations around Red Wolves Gymnasium that the defending 3A State Champions would rise again with another championship on the line.

Instead, the Red Wolves turned in a disjointed, rhythmless performance that was even more lopsided than last summer’s season-opener. The loss ended Cedar Ridge’s 25-game winning streak. Rose will go into the state championship match on a 66-set winning streak, having won 22 straight.

“I think that Rose showed up and played a better game today,” Cunningham said. “They absolutely deserved the win today and they played great. Their confidence was the difference in the match. They felt like it was theirs to take. We played like we were trying not to lose.”

The Rampants superior size wrecked havoc on the Red Wolves attackers. Powerful strokes by Red Wolf seniors Cameron Lloyd and Melissa Benkowitz that ordinarily would have fallen to the hardwood were dug up by Rose’s defensive corps of libero Forbes Hall, Riley Cutler and Anna Bayes. After Lloyd notched the first point of the match, the Rampants reeled off four in a row. Rose outscored Cedar Ridge 14-5 on service points in the opening set. Cedar Ridge’s only rally in the opening frame came off consecutive kills by Lloyd and Anaya Carter, which only narrowed the deficit to 23-16. Rampants middle blocker Helen Wilford, who has committed to Bowling Green, spiked home a kill to end the brief run.

In the second set, Cedar Ridge jumped out to its largest lead of the match at 4-1 behind an early block from Addie Reid, a kill from Lloyd and an ace from Julie Altieri. The Rampants quickly erased the early dry spell with a 6-1 spree behind kills from Anna Bayes and Amelia Taft. Rose would widen the advantage to 19-12 and eventually take the set behind a spike from Taft, who has committed to play beach volleyball at LSU.

At this point, the only way for Cedar Ridge to win would be to take a five-set victory, something they haven’t done since October 1, 2019. Rose dashed what little hopes remained immediately with a 6-1 spurt to start the third set, keyed by two aces from Taft. The Rose lead grew to 18-10 and they claimed match point on a center line violation.

Several of the Cedar Ridge seniors, many of whom grew up playing together in White Cross when they were in elementary school, were in tears in the postgame huddle. Some remained inconsolable as fans left the gymnasium.

During the pandemic year of 2020-2021, Cedar Ridge won the first of its seven championships when they captured the Big 8 Regular Season title with an undefeated league mark. They lost to D.H. Conley in front of a limited crowd (due to COVID-19) in four sets in Greenville in the 3A State Playoffs. Six months later, after Conley won the 3A State Championship, the Red Wolves returned to Greenville and swept the Vikings, the first sign that something special was brewing.

Last November, Cedar Ridge took the pregame walk of champions under the spotlight at Reynolds Coliseum in its state championship match against North Iredell. They basked in the glory of starting introductions in a darkened arena, jumped off the bench when an improbable dig by Young somehow fell to the other end of the floor in the fourth set, then mobbed together in a pileup after Lloyd scored match point to deliver the first female team state championship in Cedar Ridge history.

In August, with all of their rotation players back, plus the addition of freshman Claire Hargett, there was no reason to think Cedar Ridge couldn’t experience it again.

The hardest part of repeating is running into a team that may be just a bit healthier and bigger at the right time. How many other 3A teams could say they were truly better than Cedar Ridge?