No Fear–Brown’s hat trick leads Orange women’s soccer past Cape Fear 5-2, into 3rd round of state playoffs for 1st time 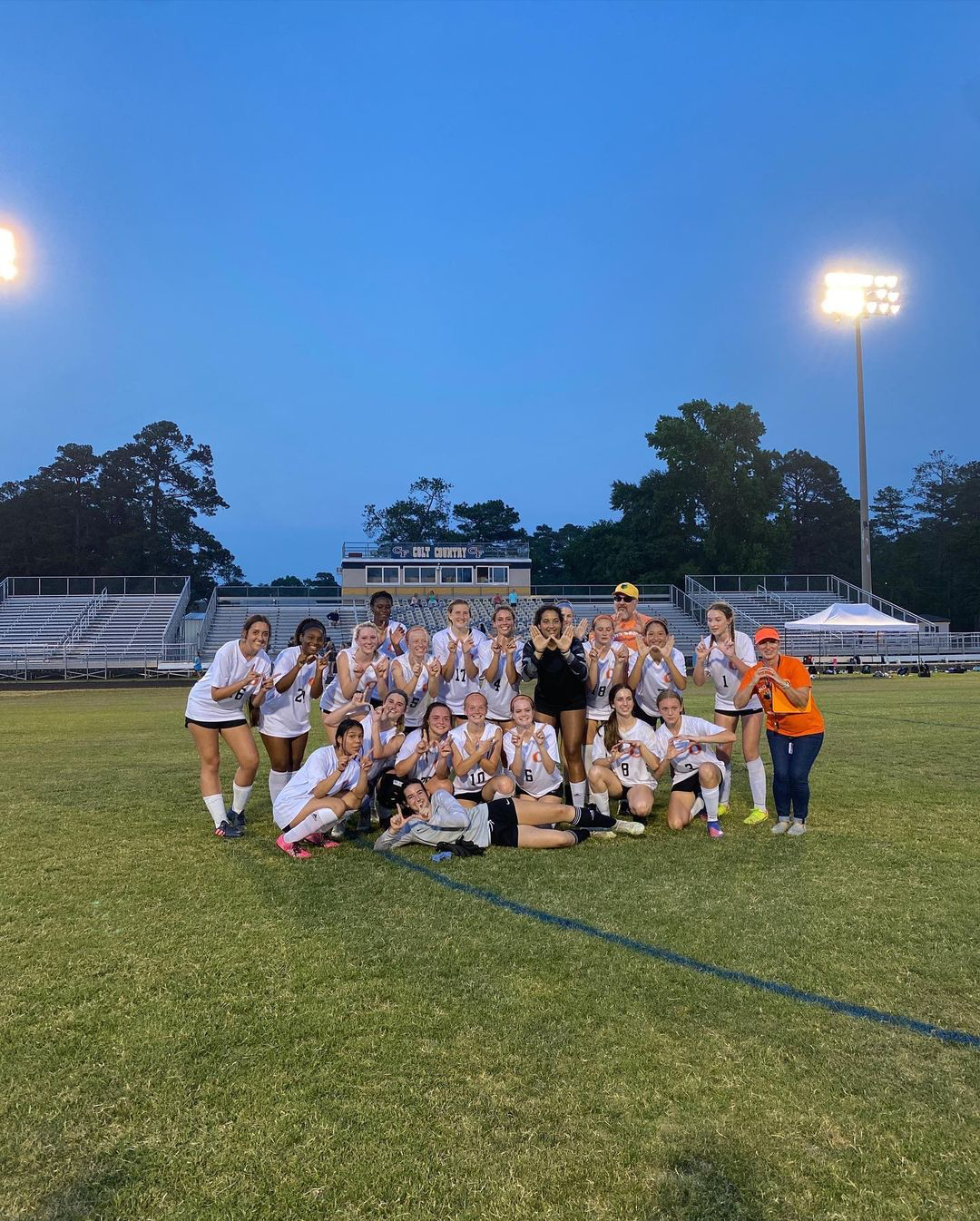 FAYETTEVILLE–91 degrees at kickoff in 45% humidity playing 102 miles from Hillsborough against a team that finished undefeated in its conference.

None of those obstacles were big enough to stop the Orange women’s soccer team from making history.

Senior Bella Brown notched her fifth career hat trick, her first this season, to propel the Lady Panthers (11-7-1) past Cape Fear 5-2 at Colt Stadium on Thursday night in the 2nd round of the 3A State Playoffs. Freshman Elliana Sullivan Gaddy notched the game-wining goal with 27:29 remaining. Sullivan Gaddy, who scored two goals in Orange’s win at Harnett Central on Tuesday night, now leads the Lady Panthers with 13 goals this season.

Cape Fear (15-4-2), who finished undefeated in winning the United Eight Conference championship, got both goals from sophomore Jayda Angel. She ends the season with 32 goals.

It’s the first time in the 34-year history of the program that Orange reached the 3rd round of the state playoffs. On Tuesday, the Lady Panthers defeated Harnett Central 5-3 for its second postseason victory in team history. The other was in double overtime against Southern Lee in 2016.

“It’s really a tribute to their hard work,” said Orange coach Jacki Mignosa. “I’m just kind of there to guide them, but they put in that time, they put in that effort. I’m glad they’re reaping the benefits.”

While Sullivan Gaddy got the game-winner, Brown injected Orange with a huge boost of adrenaline on a muggy night in the final minute of the first half. Junior midfielder Sydney Rogers sent an entry pass from 35 yards away. Cape Fear goalkeeper Meridith Wenthur struck the ball at the edge of the six-yard box. The ball popped off Wenthur’s hands, then bounced off the leg of Isabel Jones and off the chest of Brown, where it rolled into the right corner of the net with only 13 seconds remaining.

The equalizing goal provided Orange with momentum that they would not lose again.

Cape Fear had the first scoring opportunity in the second half when senior forward Brooke Dawkins dribbled up the right sideline. Dawkins fed a cross to Angel, whose attempt was blocked by Rogers. Throughout the second half, the Colts’ repeatedly tried to attack Orange’s sophomore left back Lily Crayton, who shut down every threat Cape Fear offered as Orange started controlling possession.

“When Lily gets on like that, there’s no stopping her,” Mignosa said. “She’s gets in that mindset and keeps steeping and going. She’s only a sophomore.”

Orange earned three corner kicks in the opening ten minutes of the second half. With 31:10 remaining in the second half, Brown sent a high line drive off the crossbar from 18 yard away. After Orange centerback Channing Mahaney cleared an entry pass, Crayton forced a turnover that led to a shot by Rogers that was saved by Wenthur.

As wingback Christina Paz sent a back pass to Wenthur, Sullivan Gaddy stuck her leg out, which doesn’t work about 95% of the time. This was an exception.

Sullivan Gaddy made just enough contact at the edge of the box to force a turnover. Sullivan Gaddy beat Wenthur to the ball and tucked it into the right corner of an empty net to put Orange ahead 3-2.

Cape Fear nearly earned a penalty kick on the subsequent possession. Angel sprinted towards the middle of the field, where Crayton rubbed her off the ball and fell to the turf. The Cape Fear fans screamed for a handball, but the official shook his head “no” as Crayton successfully cleared it down the field.

With 24:27 remaining, Ella Wimsatt fired a long shot that Wenthur blocked with both hands. The rebounds spilled out to the right flank, where Brown fed Jones on a gorgeous cross. Jones chipped it over the goal line from eight yards away into the right corner of the net for Orange’s first insurance goal.

Brown, who transferred from Burlington Christian Academy in 2020, ended the scoring with possibly the goal of the season for the Lady Panthers. After Crayton picked off a cross, Jones played it to Sullivan Gaddy. Brown got a slither of daylight from 22 yards away and fired a gorgeous ball that sailed into the left corner past a flailing Wenthur to send the Orange bench into hysteria.

“She’s had a lot of really pretty goals,” Mignosa said. “But that was beautiful.”

As has happened time and time again across women’s sports in the Central Carolina Conference, Orange will face a conference rival in the third round of the state playoffs. On Monday night, the Lady Panthers will travel to Burlington to face Walter Williams. On Thursday night, the Bulldogs upset second-seeded Union Pines 2-1.

Orange and Williams had a bizarre season series where the Bulldogs dominated Orange 2-0 in Hillsborough on April 14. Just eleven days later, Orange traveled to Burlington and handled the Bulldogs 5-0.

That win started a four-game winning streak for Orange that propelled them into the sate playoffs. Now, this Orange team has gone where no other Lady Panther squad before them ever has: the Sweet 16 of the 3A State Playoffs.

“I’m so proud of them,” Mignosa said. “It’s amazing and it’s really just an honor to watch them and to just have time with them and be a part of their lives right now. This team works so hard. I lot of times, I feel like they get overlooked. So I’m so happy that they gets this time in the spotlight. They deserve it.”