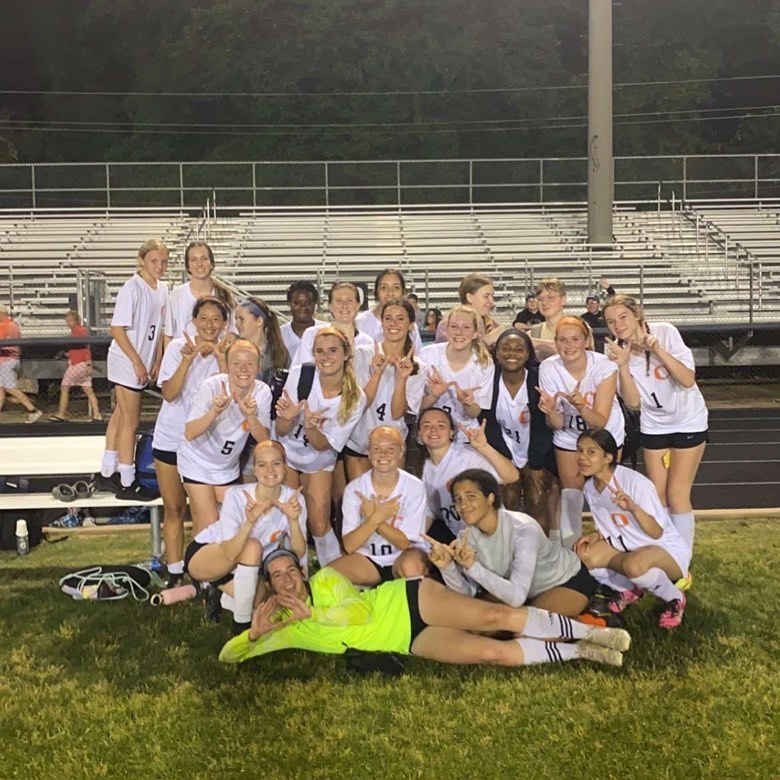 The Orange women’s soccer team had waited six years since its last win in the state playoffs. What was another 45 minutes?

Despite a severe weather threat forecast on Monday, the Lady Panthers had still driven to Angier to face Harnett Central in the opening round of the 3A State Playoffs. It was the first time Orange had been in the postseason since 2017.

Orange was a hungry, confident team and they played like it. Freshman Elliana Sullivan Gaddy notched two goals in the opening half. Senior Bella Brown, who was the Lady Panthers’ leading scorer in 2021, added another. Sophomore Ella Wimsatt and junior Isabel Jones also tallied goals to put Orange ahead 5-2 when action stopped because of a lighting.

So Orange coach Jake Mignosa, assistant Will Stinnett and the players killed time the best way they knew how. An eclectic playlist full of music to sing and dance to.

There was lots of Taylor Swift, which sophomore Kassi Scarntino labeled “her 2000s songs.” Also Hannah Montana, Willie Nelson, even a Nirvana tune that most of the players liked, though they couldn’t quite remember the title (probably “Smells Like Teen Spirit because, well, that’s what it usually is when its Nirvana). Just enough songs to pass the time until the delay ended, complete the game and head back to Hillsborough to arrive at a decent hour ad get enough rest in time for school the next day.

Except there was another weather delay that followed shortly after play resumed. This second hold-up kept the players on the pitch until the final whistle sounded at 10 PM. Mind you, the day started on Monday morning with a standard day of classes, followed by the team boarding a bus for Angier for a 100-minute road trip. By the time the bus pulled back to the soccer parking lot adjacent to Orange’s tennis courts, a wilted but victorious group of players staggered off the bus at 11:30 PM.

“It was just mentally exhausting waiting through those delays,” Mignosa said after practice on Wednesday. “Keeping their spirits up, keeping their bodies loose, it was hard. There was some music, but I didn’t want them to think we were done playing. Because we weren’t.”

Orange came away with a 5-3 victory over the Trojans, the program’s first win in the 3A State Playoffs since 2016. Though it took a long time, lengthy postseason victories tend to be common in Orange’s soccer heritage. The Lady Panthers’ last state playoff win was a 5-4 double overtime victory over Southern Lee in Sanford.

Orange, the #23 seed in the 3A East Region, travels to Fayetteville tonight to face Cape Fear. The Colts (15-3-2) finished undefeated in the United Eight Conference.

The variance of Orange’s season are emblematic of a young team that has only two seniors (Brown and Laura Garcia). Of its top three scorers, Sullivan Gaddy (eleven goals) and Caroline Cathey (17 points) are freshmen.

All of which has led to some unpredictable results this year. On April 14, Walter Williams shut out the Lady Panthers 2-0 in Hillsborough. Eleven days later, in Orange’s very next game, they traveled to Burlington and beat the same Williams team 5-0 behind goals from Sullivan Gaddy, Brown, Wimsatt, Jones and Cathey. Junior goalkeeper Abby Monteith earned the clean sheet.

Ironically, the game that delivered the biggest confidence boost for Orange was also its most heartbreaking loss. On April 12, Orange was one minute away from beating Eastern Alamance and tying for first place in the Central Carolina Conference. With roughly 45 seconds remaining, the Eagles scored the equalizing goal off a low corner kick to end regulation 2-2. In a wild overtime session, the Eagles scored twice and held off a furious, last-minute Panther charge to win 4-3. Eastern Alamance went on to win the CCC title with an 11-1 record.

It would have been easy for Orange to be demoralized. Instead, their confidence got a boost.

“I think it clicked in our brain that we could compete with anybody,” Mignosa said. “That confidence makes a big difference. I think it really helped them. We played an amazing game that didn’t go in our favor. But Coach Stinnett and I reiterated that we were proud of them and they were completely capable of playing the best of the best.”

After the Williams defeat in Hillsborough, Orange won four straight games to sew up a state playoff spot. That included three straight shutouts over Williams, Cedar Ridge and Person. Monteith, usually the goalkeeper, came away with two goals in the win over the Rockets.

In a 3-0 shutout of Cedar Ridge on April 27 at Orange Soccer Field, Monteith and Kate Barger combined to shut out the Red Wolves. Sullivan Gaddy, Cathey and Destiny Lily Crayton all scored goals, while Brown and Jones had assists.

If Orange has ever advanced to the third round of the state playoffs in women’s soccer, there aren’t any online records that show it. Which means the Lady Panthers will make a road trip to Fayetteville tonight (which severe weather in the forecast, naturally) with potential history on the line.

There are some good omens. Of the three teams from the Central Carolina Conference that reached the state playoffs, all of them won their opening round games in the 3A State Playoffs (Eastern Alamance romped past Fayetteville 71st, Williams defeated Dixon in Holly Ridge).

As the photo that accompanies this article indicates, the players seem to get a kick out of playing along each other. That bodes well for a team that is slated to have nearly everyone back next season, along with new arrivals from Orange Middle School that captured the Orange-Person Athletic Conference Northern Division Championship earlier this month.

“All the girls get along so well,” Mignosa said. “We’ve been blessed with their companionship and their camaraderie. Having Sully (Sullivan Gaddy) and Caroline Cathey come up as freshmen and start varsity games has been amazing. We know it’s going to improve for the future.”