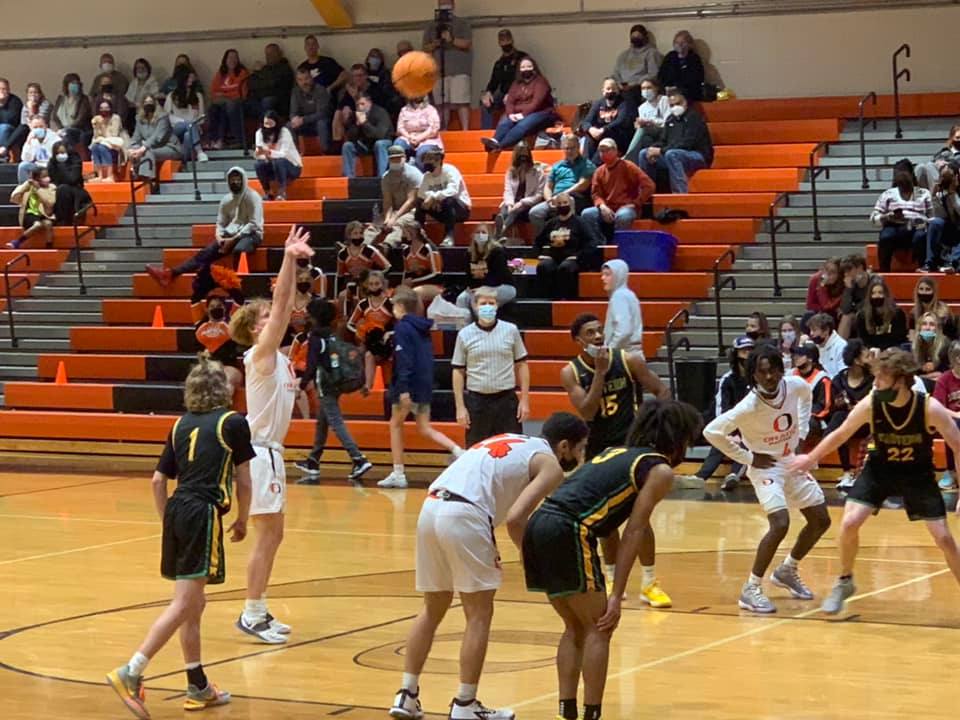 There’s an old legend in rock n’roll lore than Jerry Lee Lewis was once so mad about not closing a concert that Chuck Berry was headlining, he played “Great Balls of Fire” to finish his set, dosed his piano with gasoline contained inside a Coke bottle, lit it on fire, stormed offstage and told Berry “Top that, Chuck.”

In his final game at Orange High, Jerec Thompson wasn’t as confronational, but he did set the nets on fire.

On the day he turned 18 years old, Thompson scored 40 points, one shy of his career-high. It was enough for Orange to defeat Eastern Alamance 77-68 on Friday night in Hillsborough.

Thompson, who scored 20 points in each half, had his eighth game this year with at least 30 points.

Orange (6-16, 2-9 in the Central Carolina Conference) has won back-to-back games for the first time this year. They will conclude the regular season against Cedar Ridge on Saturday afternoon at Red Wolves Gymnasium.

It was the final game inside Orange Gymnasium for Thompson, J.J. Thompson, Joshua Jackson and Hunter Burch. Jerec, J.J. and Jackson grew up playing together at Orange Middle School as well as the Mid-State Magic AAU team.

“We knew we needed a win,” Jerec Thompson said. “We came out and did it tonight. It hasn’t really hit me yet (that this was his last game at Orange) but I’m sure sometime soon it will.”

Last week, the Eagles flattened Orange 80-57 in Mebane after the Eagles bolted ahead to a 9-0 lead and never trailed. Senior guard Caleb Gerlach scored 15 points, but was held to eight points on Friday.

The Eagles had another quick start on Friday night, opening with a 15-6 lead. But Orange went on an 10-1 run in the final 2:18 of the first quarter. Thompson had five points during the spree, including a 3-pointer that rolled in after a lap around the rim. Junior Thomas Loch sank a seven-footer from the baseline with :02 remaining in the quarter.

Thompson got a birthday bounce on the opening jumper of the second quarter, which triggered the Panthers to take a 22-16 lead. The Eagles marched right back with a 8-2 run with A.J. Weaver tying the game with a stickback bucket. McCawely gave the Eagles the lead with a free throw, then sank a 3-pointer to put the Eagles ahead 28-24.

Orange ended the half by scoring the final 13 points of the half, starting with a 3-pointer from Xandrell Pennix, followed by another trey by Thompson. J.J. Thompson made two free throws, while Thompson scored on a lay-in off a strip and steal. Thompson added two more free throws to finish with 20 at the half.

Orange increased its advantage to 48-34 after a tip-in by Isaiah Seymour, but Eastern’s Maurice Hooper shot the Eagles right back into the game. Hooper, who barely played in the first half, hit three consecutive 3-pointers to in a two-minute span to slash the Panther lead to 48-43. Pinnix drained a crucial three-pointer to alleviate the damage.

The Orange women’s basketball team played its closest game of the season against Eastern Alamance, and it nearly led to a storybook finish for one of its most accomplished players.

Trailing 41-39 in overtime, senior Aaliyah Harris came down the lane and scored on a lay-in while fouled by Kyra Helton to send the crowd into a frenzy. Harris made the free throw to put Orange ahead 42-41 with :26.3 remaining.

Eastern Alamance’s Amiyah Evans was fouled at the other end of the floor by Evelyn George. Evans sank two free throws for the margin of victory.

Harris got a final shot with three seconds remaining, but the attempted back shot was a tad too hard as the buzzer sounded. Orange senior Samantha George scored 16 points, while Harris added eleven.

Hali Watkins, who scored the final field goal of the first half for the Eagles to surpass 1,000 points in her career, led the Eagles with 16 points. Evans finished with eleven points.