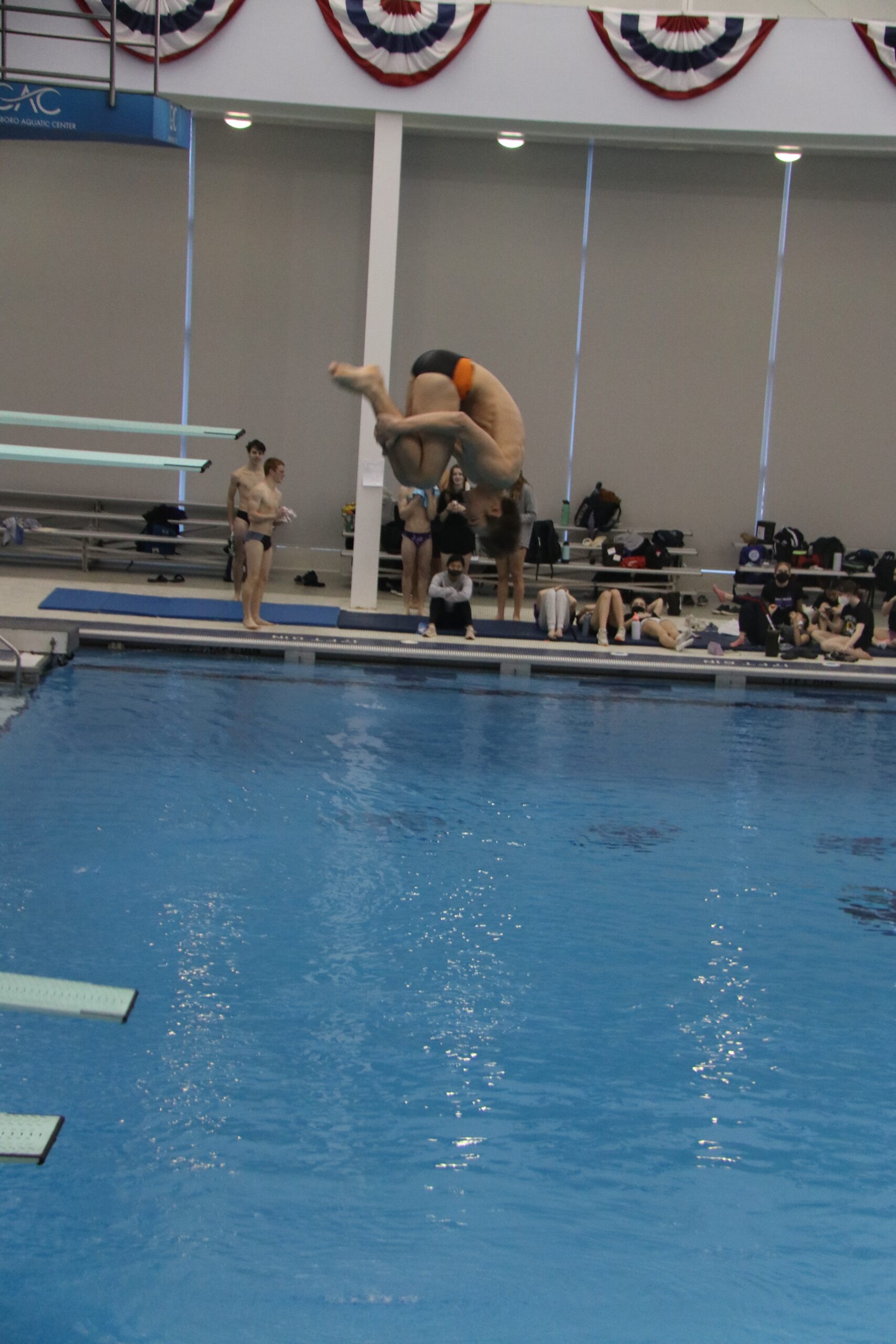 The path to success for senior diver Stanislav “Stasz” Zitko is quite different from his fellow athletes at Orange High.

Swimmers typically work out in the morning because it’s the best hours available to train together at the Orange County Sportsplex, which makes them unusual in their own right since most other sports hold practices during the afternoon and evenings. Plus, it’s the only sport where Orange and Cedar Ridge athletes practice together, which makes for a close kinship between two rival schools.

Zitko, for four years, has strayed even further away from his classmates by necessity. Instead of working out at the SportsPlex, he’s practiced at the Duke University Aquatic Center with coach Brandon Robinson. For two hours a day, five times a week, Zitko is surrounded by other divers, none of whom go to high school in Hillsborough.

“It can be a little isolating because sometimes I see other teams with more divers on them,” Zitko said. “It’s helpful to have more people on your team because you can be more competitive with each other. Everyone else is just as friendly as a team, so it’s kind of like I still have one.”

Truly in a category by himself, Zitko is the most accomplished male diver in Orange history. Last Thursday, he claimed the 3A Central Regional Diving Championship in the 1-meter springboard at the Greensboro Aquatic Center. Zitko set a new personal best of 441.20 over ten dives. It was a score high enough for All-American consideration.

“I wasn’t expecting it at first,” Zitko said. “I thought I was just going to have a normal day since I was the only one in my event. So I was really just trying to push through it and get to states. I started off pretty strong and I realized at that point that I could go for a personal record.”

This afternoon, Zitko will go for an elusive 3A State Diving Championship at the Pullen Aquatic Center in Raleigh. It’s the fourth time that Zitko has qualified for the State Championships. Two years ago, Zitko finished with a bronze medal in the state championships at Koury Natatorium at UNC-Chapel Hill.

Zitko’s parents met on a cruise in Russia. After years of moving across the United States, they finally settled down in Hillsborough, where Zitko was born inside UNC Hospitals.

When Zitko was five years old, he learned that he had a taste for extreme things.

“I just saw it was a new thing and it was interesting,” Zitko said. “I’ve done surfing, hang gliding, skiing ad snowboarding. I got competitive with diving and it stuck with me. It’s a really difficult sport. It’s constant training. One hour of dry training and one hour in the water.”

Zitko started diving at his own expense. He got in trouble at a neighborhood pool for ignoring constant warnings to not dive into the water. There were a few suspensions along the way, but Zitko discovered his high school passion at the same time.

“The people who ran the poll told my dad to sign me up for diving if I wanted to do it so badly,” Zitko said. “I had a lot of fun.”

Zitko’s coaches implored him to start going to competitions.

“At first, I didn’t really understand what was going on,” Zitko said. “I started going around to different places to practice. Later on, I learned I was gaining these skills to compete.”

Zitko started getting more daring on his dives when he worked on dry land diving into a foam pit. With time, that carried over into the water.

At the Duke Aquatic Center, if Zitko has a fear of heights, he doesn’t show it.

“Stasz likes to jump off the 10-meter platform,” said Robinson, who was alongside Zitko for his regional championship last week. “Not everyone is as enthusiastic about jumping off that platform the way he is.”

The only diving state champion in Orange High history is Jennifer Rehm, who won two 4A State Championships in 1999 and 2000 on the 1-meter springboard.