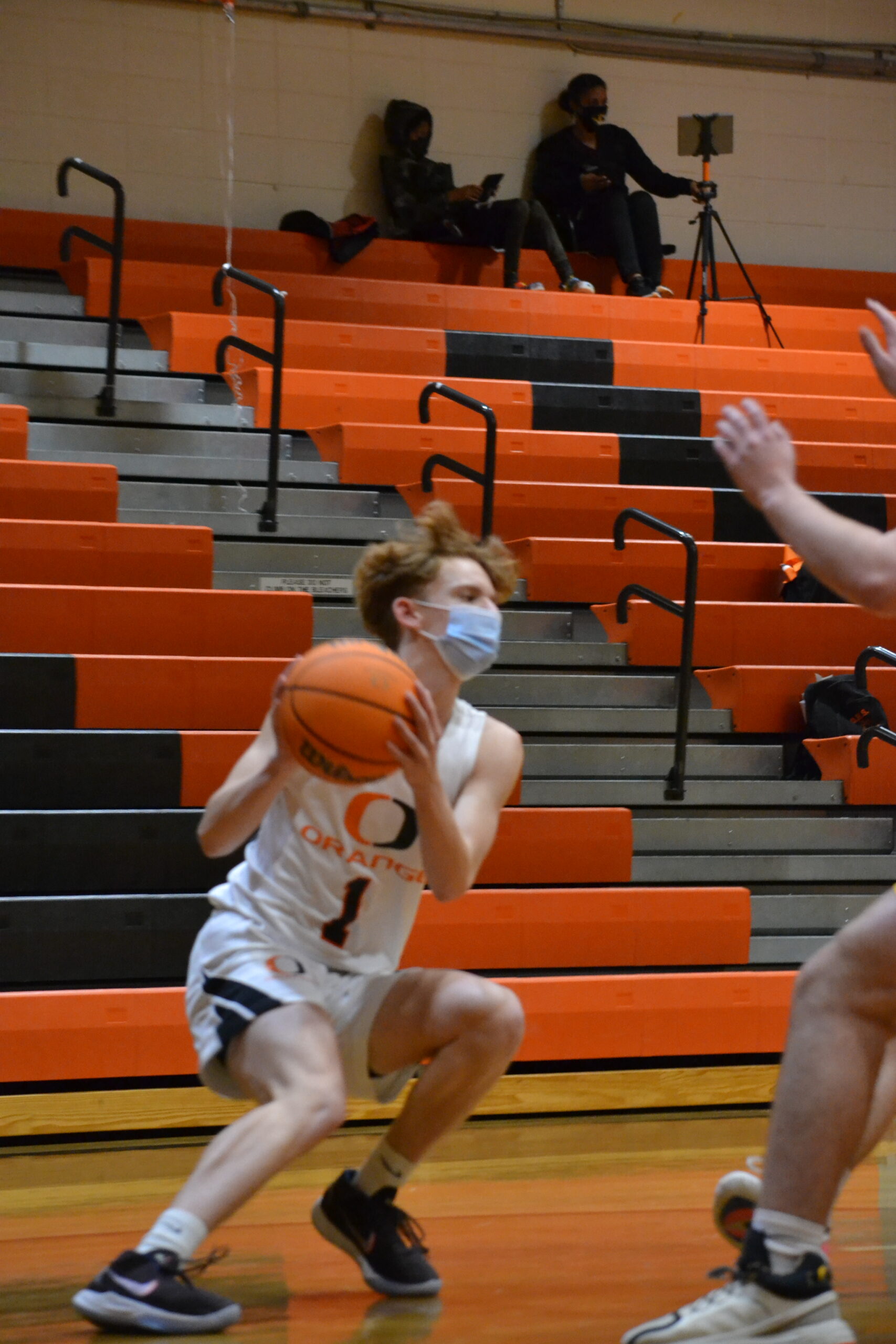 ROXBORO–Person used its size to beat Orange to open January. To start February, the Rockets utilized its speed to top the Panthers in Roxboro.

Not that Jerec Thompson didn’t have the Rockets a little worried.

Thompson struck for 39 points on Tuesday night in Rockets Gymnasium, but Person’s balanced scoring paved the way for a 82-78 victory over the Panthers. It was Orange’s first trip to Roxboro for a conference game since 2003.

Once again, Person sophomore Ty Outlaw was the X-factor for the Rockets. Outlaw is the son of former Person center Tyrone Outlaw Sr, who was the PAC-6 Player of the Year at Person in 1994. Outlaw’s older brother, also named Ty Outlaw, was a starter at Virginia Tech under former head coach Buzz Williams who was a member of the 2018-2019 Hokies team that faced Duke in the Sweet 16 of the NCAA Tournament. Last month, Outlaw played for the Wisconsin Herd of the NBA Gatorade League.

With Person leading 78-70, Orange freshman Xandrell Pennix drained a 3-pointer. In a game that moved end-to-end with warp speed at various points, Michael Clark rebounded a miss by Person’s Isaiah Smith, but the Panthers’ missed a floater that would have cut its deficit to three. Ben Pettiford turned a transition opportunity into a lay-in to increase the Person advantage to 80-73.

Pinnix quickly knocked down another 3-pointer, then fouled Outlaw, who missed the front end of an 1-and-1. which was rebounded by Thompson, who fired a 3-pointer that was blocked by Smith. Orange’s J.J. Thompson won a frantic scramble for a loose ball, but Jerec’s outside shot was blocked by Julian Crowley, which led to a slam dunk by Jancil Bumpass.

On Tuesday, Outlaw led Person with 22 points, one of five Rockets in double figures. The Rockets (10-5, 5-3 in the Central Carolina Conference) had Julian Crowley scored 17 points. Smith finished with 14, while Lance Clarke added 12. Bumpass finished with 11.

The Rockets led 62-49 with 1:10 remaining in the third quarter after a lay-in by Outlaw, but Darius Corbett scored off an assist from Kaleb Barnhardt. The Panther whittled the deficit down to 70-66 after a 3-pointer by Thompson with 4:12 remaining.

Orange hit 14 3-pointers against the Rockets, including ten 3-pointers from Thompson.

Orange will host Northwood on Friday in Hillsborough.

Women’s Basketball: Just when it seemed like the Orange women’s basketball team was back at full strength, the Panthers found themselves shorthanded again against Person in Roxboro.

Erin Jordan-Cornell, who had consecutive double-doubles against Walter Williams and Person last week, suffered knee swelling, causing her to sit out against the Rockets.

Senior Jarmil Wingate, a small forward who has often played center this season, stepped up with a season-high 13 points to push the Lady Panthers to a 51-39 win over the Rockets. Wingate also had nine rebounds, narrowly missing her first double-double since she had ten points and eleven rebounds against Northern Durham on January 9, 2020.

Aaliyah Harris had a season-high nine assists, along with nine points, as Orange improved to 11-4, 3-3 in the Central Carolina Conference.

Senior Samantha George finished with ten points, her ninth straight game scoring in double figures. George, who will attend Duke University this fall, added eleven rebounds for her second double-double of the year. George had 19 points and 15 rebounds against the North Carolina School of Science and Math on December 2 in Durham.

After a disappointing loss to Eastern Alamance in Mebane on Wednesday, Orange will play two games in less than 24 hours starting Friday night. Northwood will visit the Panthers at 6PM in Hillsborough. On Saturday afternoon, the Lady Panthers will travel to Elon to face Western Alamance. Tipoff between the Warriors and the Panthers will be 3:30.