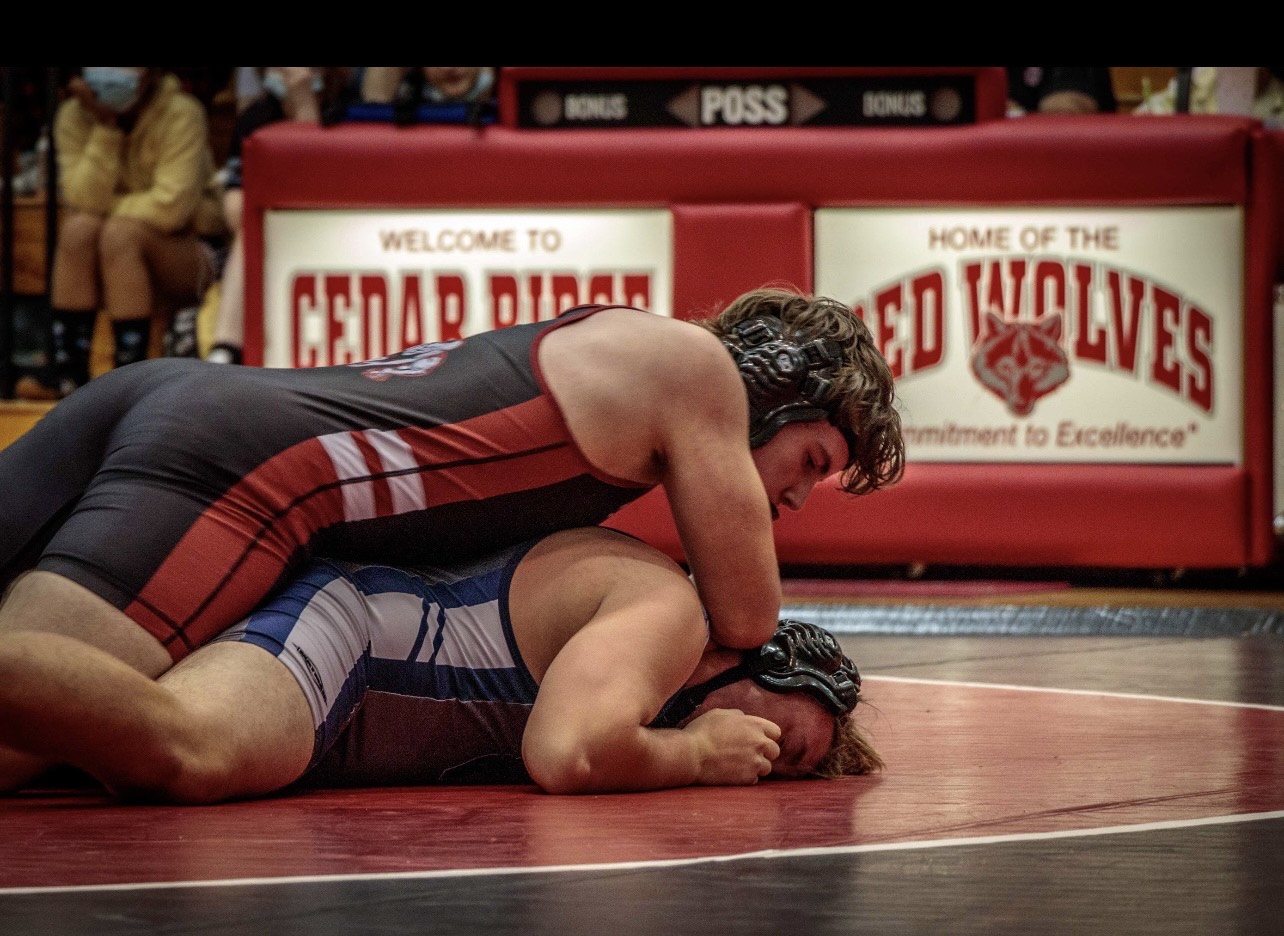 In the midst of exam break, the Cedar Ridge wrestling team finished up its Central Carolina Conference regular season schedule with its highest league finish since jumping to 3A in 2012.

Behind pins from freshman Lee Oguntoyinbo and Shea Spiller, the Red Wolves defeated Williams 45-27 on Wednesday at Red Wolves Arena. It was the final CCC match of the season for Cedar Ridge, who ensured a 3rd place finish with a 4-2 record.

Oguntoyinbo, competing at 132 pounds, pinned Xiomara Hernandez-Morales in 1:25. Oguntoyinbo improved to 17-9 with ten pins on the season. It was one of only five matches the entire evening that were contested. The other eleven were forfeits, including a double forfeit at 106 pounds.

At 152 pounds, Shea Spiller pinned Alex Solari in 3:30. It was Spiller’s fifth win of the season.

Cedar Ridge junior Fernando Martinez earned a forfeit victory at 120 pounds, his 82nd career win. This season, Martinez is 27-7 with ten pins. Martinez is on track to become the first Cedar Ridge wrestler to record 100 career wins since Colin Davis, who graduated in 2018.

This weekend, Cedar Ridge will journey to Montgomery Central High School in Troy, NC for the Montgomery Duals. The Red Wolves will compete against Trinity, Thomasville, Richmond County and West Wilkes. Last week, Trinity faced off against the Red Wolves during a twi-match that also included Western Alamance. The Bulldogs defeated the Red Wolves 65-9.

Cedar Ridge put themselves in position to finish 3rd in the Central Carolina Conference with a 60-24 victory over Western Alamance at Red Wolves Arena on January 5.

Against the Warriors, Oguntoyinbo pinned Connor Soliz at 132 pounds. Spiller earned another pinfall win at 160 pounds over Kaine Bryant.

James Este Wittinger earned a victory by disqualification over Dylan Teague at 182 pounds. At 195 pounds, Joe O’Melia pinned the Warriors’ Logan Barnes. O’Melia has 17 wins this season, eleven via pinfall.

The 3A Mideast Regionals will be held at Union Pines High School in Cameron. Last season, Daina Pritchard of Cedar Ridge qualified for the 3A State Championships.