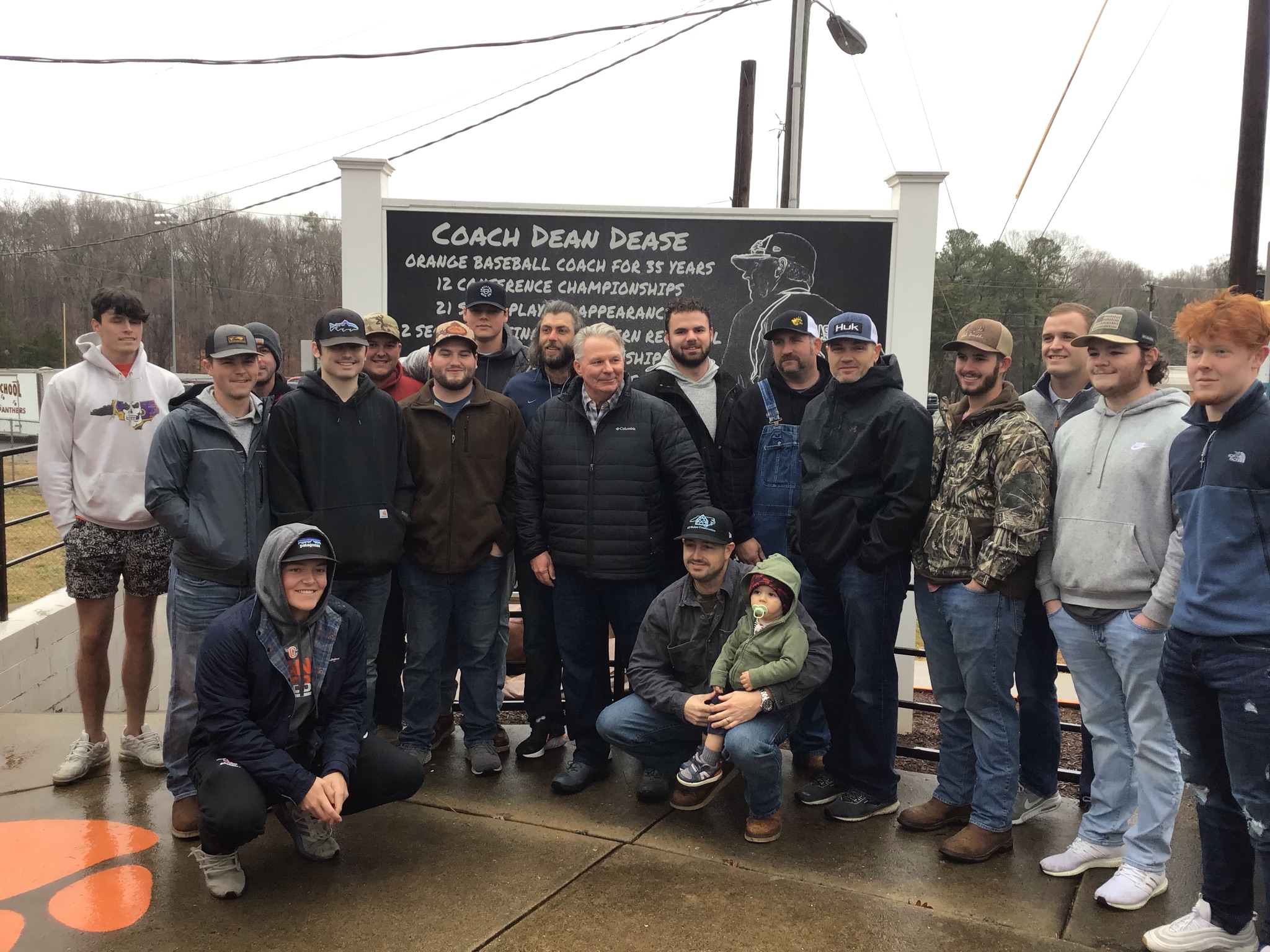 Dean Dease has spent more Sunday afternoons at Orange High ballpark than any other place on Earth.

It’s where he mowed grass, raked dirt, spread fertilizer, sewed grass, picked up rocks and sunflower seeds for 35 years. He was doing this in the early 1990s, a time when some local high schools still had grassless infields. By his own admission, keeping Orange’s field in proper shape was his obsession.

This past Sunday was different. Since retiring as Orange’s baseball coach at the end of the 2018 season, he has kept his distance from the program that he once couldn’t pull himself away from.

Two years ago, Dease’s replacement, Jason Knapp, started work with the Orange Dugout Club on a sign that would hang alongside the entrance to Orange High Baseball field. As visitors walked up the steps towards the press box, they would see the long list of accomplishments that Dease achieved over three decades in Hillsborough. He started at a time when there was only one high school in Hillsborough and just two public high schools in all of Orange County.

After many delays created by the pandemic, various schedules to get the right people in place, the day for the unveiling finally happened this past Sunday.

Usually, Dease worked on the field amid the ruthless North Carolina summer heat, something he endured growing up in Bessemer City.

However, Sunday’s ceremony was a surprise for Dease, something that his wife Jan and daughters M’Lynn and Abby have kept secret for months.

Once the surprise was finally revealed, Dease couldn’t hold back his emotions.

“That’s beautiful,” Dease muttered as the sign, outlined in white against a black backdrop, was unveiled.

The sign listed Dease’s 12 conference championships, 21 state playoff appearances, two sectional finals, the 2008 2A State Championship, and his induction into the North Carolina Baseball Coaches Hall of Fame in 2019.

“You don’t even remember winning all that stuff, do ya?” Knapp asked Dease.

“No, but I remember all the losses,” Dease replied.

“This is an honor,” Dease said after he composed himself. “I never even considered something like this. First of all, thank you to the players because none of this happens without players. We’ve had some really great players in my years. When I started in 1988 with those guys, even Bobby Miller was good.”

All coaches, regardless of sport, have ups and downs with parents. Dease navigated the ebbs and flows of parental demands as much as anyone who ever coached in Hillsborough, but he honored the mothers and fathers in his speech.

“You’re their discipline, their role models,” Dease said. “Without good parents, we don’t have good players and that’s the bottom line.”

Wilson, who won Game 4 of the National League Championship Series for the Atlanta Braves just 14 months ago, stood on the stairwell that leads to the press box with his father Chad during the ceremony. Wilson pitched for Orange from 2013-2016, where he recorded a 33-4 record with a 0.90 ERA. He was a member of four Big 8 Conference championships. In his senior year, Wilson had two no-hitters, including a perfect game against Eastern Wayne in the opening round of the 2016 3A State Playoffs.

“This had been in the works pre-COVID,” Knapp said. “We were finally able to pull it off. There were a bunch of bumps in the road. I’m glad we could finally make this happen. Coach Dease is a mentor. As a young coach growing up, I always looked up to him. Before I came to Orange, I was always picking his brain. trying to mimic his program, trying to bring things that he had created where I was at. He’s just a guy that all coaches in the state still look up to.”

“I worried when I retired what would happen to the field and to the program,” Dease said, who was drowned out by parents murmuring he was more worried about the field. “Obviously, there’s been no looking back. Jason has taken it to another level. So thanks for everything you’re doing.”

Dease’s daughters inherited their love of the game from their father. M’Lynn, who recently graduated from Coastal Carolina, served as a student manger for the UNC Wilmington Seahawks baseball program. In his speech, Dease expressed remorse that he couldn’t have seen more of her games for the Orange softball team, whose games are a short walk down the hill from the baseball field.

“I never saw a game because we were up here,” Dease said. “Somebody said she hit a double off the field one time, I don’t know. I sacrificed a lot of time with them.”

When Abby Dease was a swimmer at Orange, Dease could be found poolside holding a stopwatch to time her meets.

Sitting around the house in retirement has been a challenge for Dease–almost as much as winning 503 games over 35 years.

Since retiring as a teacher at Orange in 2017, he’s kept himself busy by waking up early on weekday mornings to mow lawns at Occoneechee Golf Club. It’s where one of his former students, Scott Ray, works as the day-to-day manager and another former player helps keep the course looking immaculate.

After three years away, Dease is ready to return to coaching. During the ceremony, he announced he had recently accepted a position to become the new head coach at Durham Academy.

“I’m sticking my foot back in the door,” Dease said. “I didn’t know what else to do. I don’t have any skills!”