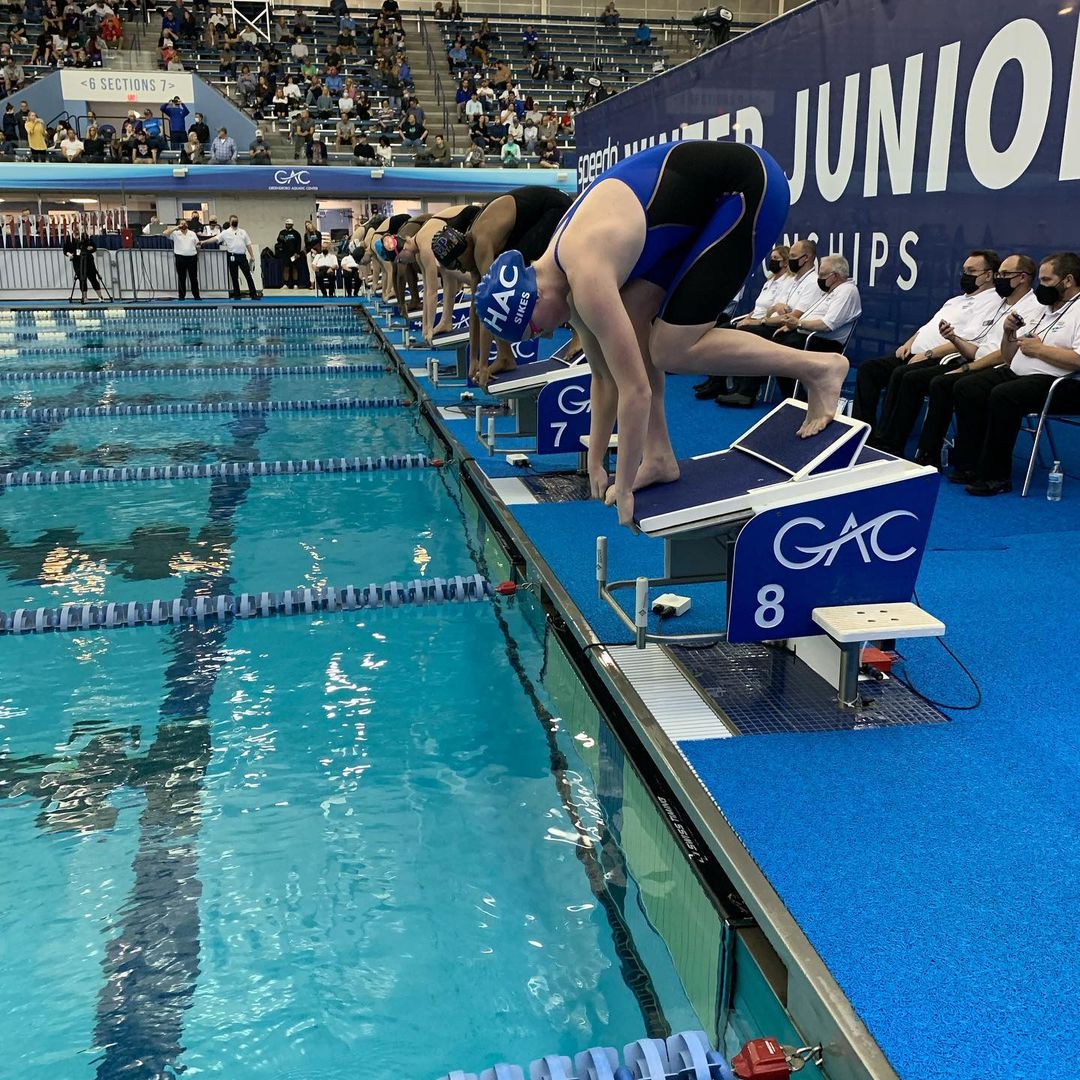 Just a few months into her sophomore year at Orange, Katie Belle Sikes has already accomplished more than any swimmer in school history.

This weekend, Sikes added to her impressive resume by competing at the Winter Junior Championships East at the Greensboro Aquatic Center, adjacent to the Greensboro Coliseum.

The four-day event started on Wednesday with a 200 medley relay and an 800 freestyle relay. It brought together swim teams and competitors from states from as far away as Nebraska, Michigan, Kentucky and New Jersey.

In the 50 yard freestyle, which is Sikes’ top event, the qualifying standard for the Winter Junior Championships is 23.29 seconds. Sikes has beaten that mark several times in various competitions, most recently for Orange High in its season-opening event at the Orange County Sportsplex competing against Cedar Ridge and Eastern Alamance on November 24. Sikes finished first in that meet at 22.84.

On Saturday, Sikes represented the Hillsborough Aquatic Club, her travel team that keeps her training at the Sportsplex year-round. In the 50-yard freestyle, Sikes finished 23rd overall in her first appearance in the event. Sikes had a time of 23.24 seconds in the final. Anna Moesch of New Jersey finished 1st overall at 22.52 seconds. In her preliminary race, Sikes finished 24th with a time of 23.26 seconds.

The Winter Junior Championships are a highly anticipated annual event that bring the elite of youth swimming together. The East Regional was held at the Greensboro Aquatics Center, while the West Regional took place in Austin, Texas.

In her freshman year, Sikes won the 3A Central Regional Championship in the 50-yard freestyle at 23.31 seconds. In the 3A State Championships, Sikes finished second behind Charlotte Catholic senior Olivia Rhodes, who touched the wall at 22.99 seconds. Sikes came in at 23.26 seconds.

Another Orange competitor who has been on the verge of a state championship had an impressive start to his senior season. Stans Zitko finished first at the Chapel Hill-Carrboro City School Dive Invitational at Koury Natatorium on the UNC-Chapel Hill campus on Wednesday afternoon.

Zitko is no stranger to competing at Koury Natatorium in Chapel Hill. In 2019, Zitko finished 3rd in the 3A State Championships at the North Carolina High School Diving Championships at UNC. In February 2019, he became the first diver in Orange High history to win a Central Regional Championship when he compiled 372.70 points. In his freshman year, he won the Big 8 Conference Championship.

While his swimming colleagues train at the Sportsplex, Zitko works out at Duke University. He has qualified for the 3A State Championships in all three of his years at Orange. His goal this season is to win a state championship and earn a diving scholarship to a major university.

The Orange men’s and women’s swimming and diving teams will continue its season in 2022 at the Orange County SportsPlex.