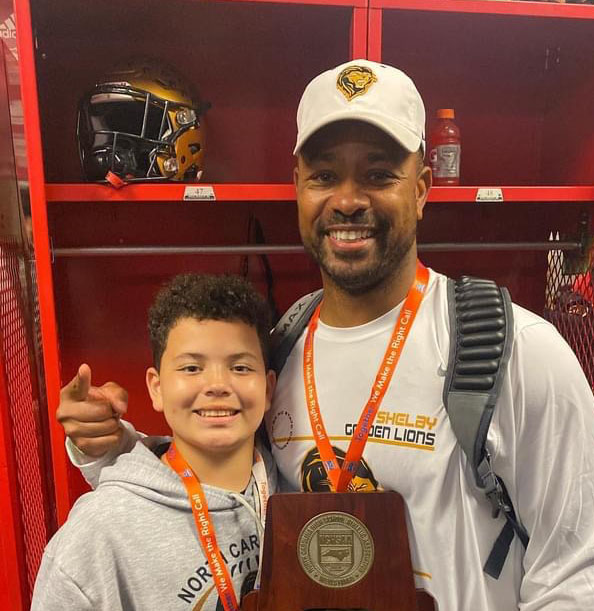 Damon Scott: The Shelby Golden Lions defeated the Wallace-Rose Hill Bulldogs 55-34 for the 2A State Championship at Carter-Finley Stadium in Raleigh on Saturday. Damon Scott, a 1993 Orange High graduate and Cedar Grove native, is the running backs coach for the Golden Lions. In his sophomore season, Scott was the tailback for the most successful Orange football team of the 1990s. In 1991, Orange went 9-3 and defeated Hillside 14-8 in overtime on the final night of the regular season at North Carolina Central University to clinch a playoff spot, which was limited to 32 teams in 4A football (the highest of four classifications). Scott scored the game-winning touchdown for the Panthers, which included future Orange softball coach Eddie Davidson at fullback and current Granville Central men’s basketball coach Mike McDaniel at linebacker. The following week, Orange journeyed to Greenville and defeated J.H. Rose 23-6 in the opening round of the 4A State Playoffs. Scott was the leading rusher in the game. That was Orange’s only state playoff win of the 1990s and still the last time the Panthers won a playoff game when only four state champions were crowned in North Carolina football. After graduating from Orange, Scott became a I-AA (now Football Championship Subdivision) All-American running back with Appalachian State. He was a member of Appalachian’s 1995 Southern Conference championship team, which finished the regular season 11-0. The Mountaineers started the year with a win at Wake Forest and eventually defeated a Marshall squad led by Randy Moss on a snowy night at Edwards Stadium in Huntington, WV. In that 1995 season, two-thirds of Appalachian’s starting backfield consisted of Orange High graduates: Scott was at tailback for Coach Jerry Moore. The quarterback was Scott Satterfield, now the head coach at the University of Louisville. In his Mountaineers career, Scott rushed for 3,800 yards. He was inducted into the Appalachian State Athletics Hall of Fame in 2014.

Emerson Talley: The most successful season in the history of Lenoir-Rhyne women’s soccer came to an end in the Final Four of the NCAA Division II tournament. #1 Grand Valley State defeated the Bears 3-0 at Weidner Field in Colordo Springs, CO. The Bears end the season 12-6-5. It was the first time ever that Lenoir-Rhyne made the Final Four. Talley, who is the all-time leading scorer in Cedar Ridge women’s soccer history, finished her freshman season playing in eight games for the Bears, starting two.

Connor Crabtree: The Richmond Spiders men’s basketball team returned to action by beating Toledo 72-69 at the Robins Center on Saturday. Crabtree came off the bench for the Spiders and played 18 minutes. He scored eight points off 3-of-6 shooting from the field. He went 1-of-2 from 3-point range. He also grabbed five rebounds and dished out three assists. On Sunday, the Spiders defeated Northern Iowa 60-52 at the McLeod Center in Cedar Rapids, IA. Crabtree played three minutes for the Spiders against the Panthers. Richmond is 6-4 and is on a three-game winning streak. Crabtree will return to North Carolina next weekend. The Spiders will travel to Charlotte to face N.C. State at the Spectrum Center for the Basketball Hall of Fame Shootout on Friday.

Joey McMullin: Sandhills Community College easily defeated the Pfeiffer junior varsity team 115-79 in Misenheimer on Monday night. McMullin came off the bench to score 12 points in 20 minutes for the Flyers. McMullin shot 6-of-9 from the field. He also grabbed three rebounds and dished out three assists. Sandhills has now won three in a row. The Flyers are 8-4 overall. Thus far in his first season with Sandhills, McMullin is the second-leading scorer on the team, averaging 13.2 points per game. He’s also second on the team in field goal percentage at 52.7%. The Flyers will return to action to face Shooting for Greatness Academy on Wednesday in Pinehurst.