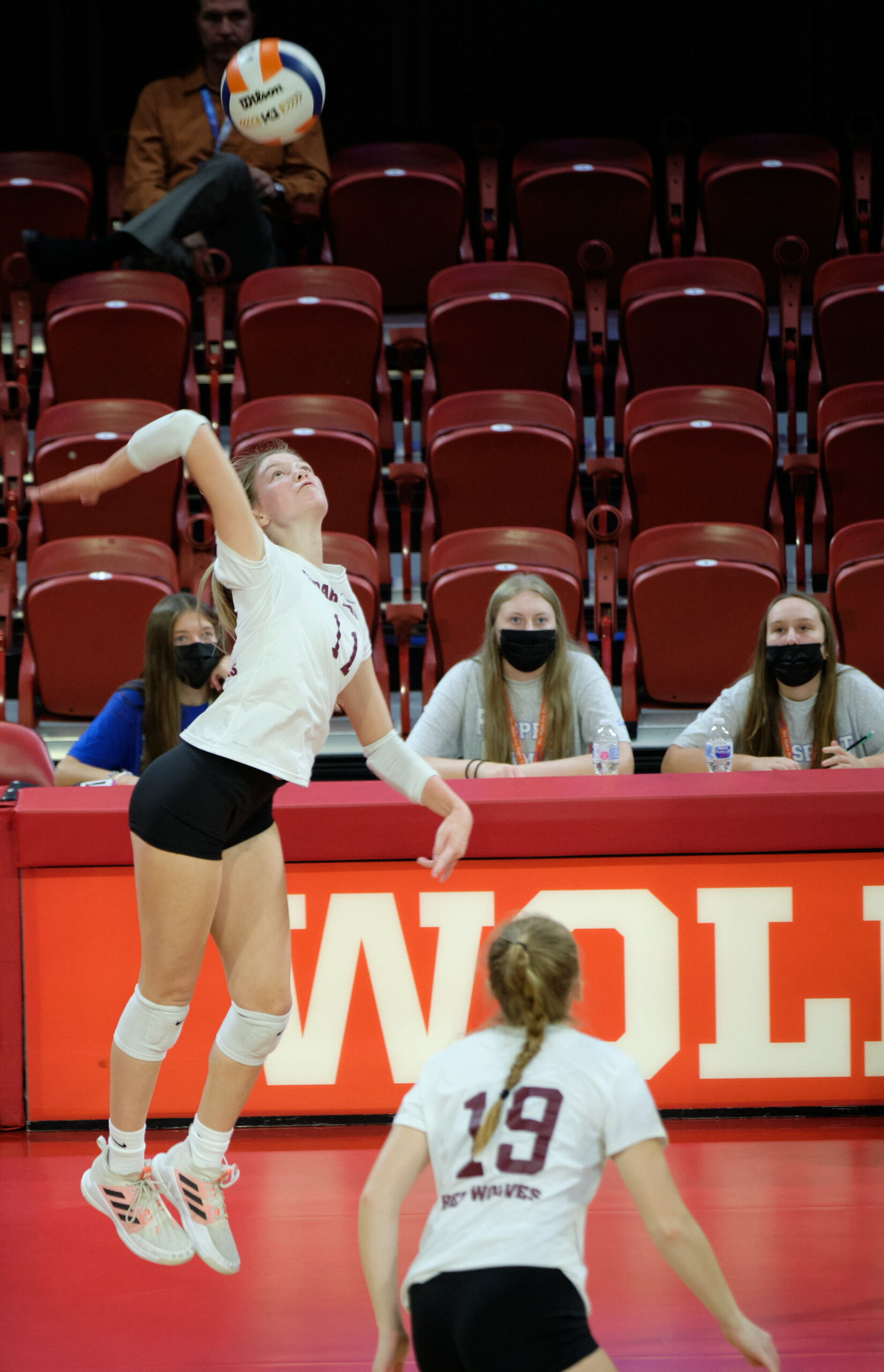 Two weeks after Cedar Ridge’s volleyball team became the first female squad in school history to win a state championship, their captain has received another honor.

Junior Cameron Lloyd has been named the 3A State Player of the Year by the North Carolina Volleyball Coaches Association. Lloyd was also named to the All-Region 3 Team by the NCVBCA, along with classmate Cameron Lanier.

Lloyd was named the Most Valuable Player of Cedar Ridge’s 3A State Championship victory over North Iredell at Valvano Arena in Reynolds Coliseum in Raleigh on November 6. Lloyd had 13 kills, eleven digs, two assists and an ace as the Red Wolves prevailed in four sets over the Raiders. Lanier finished with 12 kills against the Raiders, along with seven digs, two blocks, and one ace.

This season, Cedar Ridge won a school-record 31 games. The Red Wolves went 12-0 in the Central Carolina Conference, which had five teams in the top 16 of the 3A East RPI rankings, including #3 Person, #4 Northwood and #6 Orange. Nonetheless, the Red Wolves defeated their aforementioned top rivals in the CCC three times each. Cedar Ridge topped Orange and Person in the CCC Tournament, then beat Northwood in the 3A Eastern Regional semifinals.

Lloyd led Cedar Ridge with 360 kills this season, setting a new single-season school record. On September 9, she recorded her 500th career kill in a 3-1 win over Eastern Alamance in Mebane. On two separate occasions, Lloyd reached her single-game high of 19 kills, first against Orange on September 7 at Red Wolves Arena, then again against East Chapel Hill on September 21 in Hillsborough.

A major ingredient to Lloyd’s 360 kills was her setter, junior Julie Altieri, who finished with a team-record 717 assists. Altieri was awarded a golden volleyball before Cedar Ridge’s game against Northwood for 1,000 career assists on September 28. Altieri, who is now a member of the Red Wolves’ women’s basketball team, will go into her senior season with 1,499 career assists.

Altieri also kept opposing teams off balance by being a left-handed setter. She led the team with 70 aces.

In January, Lloyd was named All-Big 8 Conference and team MVP when the Red Wolves finished 8-0 and captured the Big 8 Conference Championship in an abbreviated season because of the pandemic. After beating Union Pines in the opening round, they lost to D.H. Conley in Greenville.

Cedar Ridge learned a lot from that loss to the Vikings. More importantly, they filled several gaps.

While Lloyd led the team in kills, her attacking load wasn’t as full this year compared to her freshman and sophomore seasons. The addition of former East Chapel Hill libero Melissa Benkowitz, who transformed into a reliable outside hitter, and the debut of sophomore Addie Reid gave the Red Wolves more weapons.

“We learned that we have to rely on everybody,” Lloyd said after the Red Wolves win over South Johnston in the 2nd round of the state playoffs on October 26. “We couldn’t rely on one person to two people. It’s a team sport and we needed to step up and own our position.”

While it wasn’t heralded at the time, Lanier also reached the 500-kill plateau in the win over North Iredell. This season, Lanier had 245 kills, along with 39 total blocks.