Two Cents from the Franklin Mint: Thank You 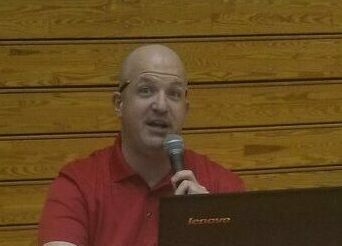 Cedar Ridge’s amazing run to the 2021 NCHSAA 3A State Volleyball Championship has been by far, the most exciting moment I’ve had the privilege to witness in my almost 28 years of announcing. Even though I wasn’t behind the PA microphone at Reynolds Coliseum, I still witnessed the magic while serving as the color analyst to Jeff Hamlin on HillsboroughSports.com.

You see, the healing was for me.

Until this season’s opening game versus Riverside, I had not announced a game at Cedar Ridge since February 10, 2020 – the 2019-20 basketball season finale against East Chapel Hill. Because no one knew how to combat an organism one billionth of our size (and truly still don’t), everything shut down within a few weeks.

The only thing that filled up my time was working my job in prisons.

Day after day, I was exposed to inmates and staff that contracted the virus. At one point, the facility I worked at led the nation in the number of inmates infected and the number of inmates to die from the virus. Because the virus affected staff as much as the inmates, the use of Augmentation (otherwise known as using staffers in other positions such as secretaries, cook foremen, maintenance foremen, teachers, etc. – to staff custody posts) and Mandatory Overtime skyrocketed.

Factor that in with mass retirements, promotions, reassignments, and the occasional firings, our staffing numbers dwindled to a low that hasn’t been reached since 2005. The agency had already been into a four-year free fall in not being allowed to hire new staff (except in exigent circumstances). As a result, being called for a mandatory overtime occurred one to three times per week. Working inside of a prison for 16 hours at a time is like being in there for a week.

When this was factored along with those harboring anti-law enforcement, anti-prison sentiments and rhetoric (aka “Abolish Prisons” and “Defund the Police”), the mental anguish became so hard to bear.

Over the past year, I encountered manipulative inmates superficially cutting themselves because they didn’t get their way on a certain issue. I encountered suicidal inmates as one broke off a camera (used to observe them), fashioned a noose out of the fiber-optic cable and the camera receptacle, and then stand on a ledge and jump after placing the noose around their neck. I along with other prison staff had to breach the secure door to wrestle them to the ground and restrain them to prevent their demise.

I also encountered staffers that were so lazy, unmotivated, undisciplined, and unwilling to perform the job they swore to do. Many of these were new hires that came in from other correctional agencies for the pay increase. As a general instructor and new employee trainer for my agency, I did all I could to teach the next generation of correctional staff on how to be a good employee, all to be rebuffed and insulted.

I also had supervisors that served themselves instead of helping their staff. In prisons, a good supervisor will do anything to help their staff so that it maintains good morale and camaraderie. Over the last year, I saw supervisors continually leave their officers hanging on many issues, throw officers under the bus, and themselves break policy all because – in their words, “I’m a supervisor, because I can”. If we had broken policy, we’d all be in front of the Warden facing untold amount of suspension, if not worse.

But the straw that broke my back was when I had appointments to see a mental health counselor but was forced to work mandatory overtime. Despite showing the documentation that I had an appointment, the supervisors cared little about the mental health of one of their best officers. One supervisor even told me, “Our roster holes are more important than your mental health. So, work the overtime or face a write-up”.

The inability to receive mental health counseling was so aggravating, I wound up talking to a co-worker that I thought I could talk to. I told her that I’ve gained weight from stress eating, not slept much because of racing thoughts, suffered constant isolation, the inability to announce games, and the aforementioned work issues brought on breakdowns and wasn’t sure if I could overcome them. Instead of being a friend and helping me work through this, I was snitched out to the supervisors.

I was then reassigned to a never used, cold (then later broiling with the season change), dirty, rain-leaking, human waste smelling tower to monitor phone calls of inmates wanting money, pictures, or phone sex. Our HR department was so pious saying this was done “to protect you”. In reality, it made my issues become more complicated.

Despite serving my country and community for 17.5 years, I had to walk away from law enforcement because it was too hard to bear. Sadly, it’s going to take a lot of time for me to recover. That is, if I can recover.

But some good things happened – I got married and Cedar Ridge Volleyball.

I don’t want to give my wife Sarah any short shrift in this column, but she’s been the rock I’ve leaned on throughout this ordeal. When working in prisons, I came home many days to spend the first 30 to 45 minutes crying my eyes out. She dealt with her issues too with work in the ER and now a surgery center. She was also burdened with planning a pandemic wedding.

Want to see a blushing bride cry? Tell her she can’t have her dream wedding all because bureaucrats control the rules on who can or can’t come. Despite a very scaled down, yet elegant ceremony, Jon and Sarah became Mr. & Mrs. Franklin. No matter where I go, even if I just go to the store for a gallon of milk, I come home to an effervescent smile, and a sense of warmth that could thaw a glacier. Throughout this whole ordeal, she’s been right beside me as my biggest fan and my best encourager. She’s my spotter during football season and is always at my side during volleyball and basketball.

I love you Sarah, thank you for always loving me even when I don’t deserve it.

To be told that I could announce, the thing that brings me a lot of joy these days, felt like a weight lifted off of me. To help bring excitement to the players and spectators, was the spark I needed.

Without Cedar Ridge Volleyball, I wouldn’t have had the ability to hear the Wolf Pack. That’s right, those zany students chanting some of the craziest sayings, making noise to distract the opposing servers, and the “OH YEAH!!” that’s been synonymous with their cheers.

Their best chant of the year? “Start Your Tractors”.

Normally inside Cedar Ridge Arena, this chant is “Start the Buses”. But when Cedar Ridge led 23-16 on North Iredell in the fourth set at the 3A State Championship game, this chorus broke out in response to the rowdy fans from Olin who came not only dressed in red and blue, but were clothed incowboy hats, jeans, and boots. Following Cameron Lloyd’s exclamation point to win the title, the only noise inside Reynolds Coliseum came from our adoring fans.

Without Cedar Ridge Volleyball, I wouldn’t have seen the post-point dillies from the team. For example, a service ace displayed a double arm sweeping motion. For a few games in the playoffs, this prompted a quick set of pushups. When a Red Wolf would attack off of the hands of their opponents, the team responded with their hands in the air (similar to a football referee signaling a safety), and a ballerina twirl. Often called a “tool”, the team displayed a drill motion. When an opponent’s serve went out of bounds, the team would give a nod to softball as the teammate on the end would simulate a swinging motion of a home run, all for the rest of the team turn around simultaneously and watch ball fly by, accompanied by a Ric Flair “WHOO!”.

Without Cedar Ridge Volleyball, I wouldn’t have met Merridith Stutts. Mrs. Stutts, the mother of Carrboro libero Emily Stutts, visited Cedar Ridge Arena for the Dig Pink fundraiser game against the Jaguars. Mrs. Stutts was honored as a “Champion” (a person who fought cancer and won) and amazingly won the 50/50 raffle. As I invited her to come to the scoring table to collect her winnings, Mrs. Stutts graciously returned the $180 prize to Coach Pam Scism. She informed the house that she battled stage 3 breast cancer and had been cancer-free for ten years. She wanted to donate the winnings in honor of those fighting similar battles. With her declination of the winnings, Cedar Ridge was able to donate $500 to the UNC Lineberger Cancer Center.

Despite having a really bad day at a job I was working, I learned from this dear lady that life is short, but precious. It should be spent in the moments enjoying the things that you love and sharing the things you enjoy with the people that you love.

Without Cedar Ridge Volleyball, my father wouldn’t have seen me announce. In the first round of the state playoffs against South Brunswick. My dad, Dale Franklin, and I, were originally at the North Carolina State Fair with our wives until we both made our way to Hillsborough for the game. While it wasn’t the barnburner game of a lifetime, having my dad in the stands next to me is something I’ll always cherish. It’s not the first time he’s heard me announce, but just having him in town to hang out is good enough. Having him next to me as I’m doing something I enjoy, is even sweeter. After we finished and made our way back to Raleigh to pick up our better halves, Dad gave instant validationthat the Red Wolves have a lot of talent and weapons and will be successful. My dad, as always, was right.

That’s major kudos from a guy that really doesn’t know much about volleyball.

Without Cedar Ridge Volleyball, I wouldn’t have enjoyed the friendship from everyone associated with this team. It doesn’t matter if you were a player, coach, athletic director, parent, or just a fan. For you to share your friendship means the world to Sarah and me.

One example is from Jeff Young, Grace’s dad. He told me he appreciated the music selection from our generation. I had played the tune from Living Colour known as “Cult of Personality” – the theme song to former WWE and now AEW star, CM Punk. So as a way of say thank you for that, this song got featured inside Cedar Ridge Arena at the end of the first set during the playoffs. Other songs such as AC/DC’s Shoot to Thrill (Ready to Kill), Cotton-Eyed-Joe, Seven Nation Army and others were played as it created such a raucous environment inside Cedar Ridge Arena.

Another example is from assistant coach Pam Scism. The first person I normally meet when I arrive is this dear lady. Normally, she’s preparing the junior varsity team for battle, but always has an encouraging word. To be honest, I don’t think Coach Scism has any negativity in her bones, because every interaction with her is always positive. I can tell her positivity spreads to the players.

I could go on and on, but this season was exactly what I needed. The road to the state championship didn’t go through Olin. In so many ways, it went through Hillsborough. Even though I’m jobless and struggling to find another job, my heart is full. While I still hurt inside, there is light at the end of the tunnel.

Thank you, Sarah, and Cedar Ridge Nation, for guiding me through the darkness.